Ankara has hardly any influence left over events in Syria and its goal of deposing President Bashar al-Assad is no closer now than four years ago, while the persisting conflict poses ever-increasing headaches for Turkey. 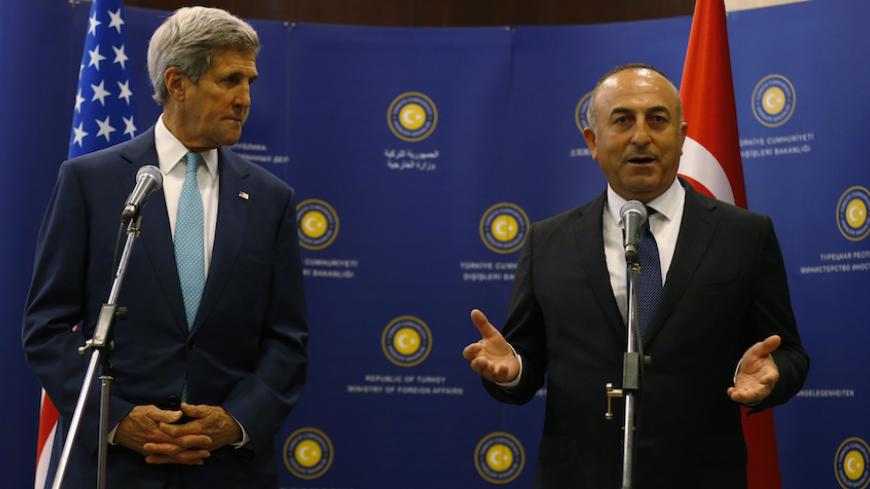 As the Syrian crisis enters its fifth year, an end to one of the bloodiest conflicts the region has seen in modern times appears no nearer, leaving Turkey bearing a large share of the burden while facing serious quandaries it has found no answers to yet.

Having marginalized itself regionally in a series of miscalculations since the end of 2011, Ankara has hardly any influence left over events in neighboring Syria, let alone in the rest of the Middle East. Meanwhile, events continue to move in a direction that is anathema to Turkish President Recep Tayyip Erdogan and Prime Minister Ahmet Davutoglu, who still insist on the total defeat of Syria’s President Bashar al-Assad and his regime and its replacement by an elected government.

Recent remarks by US Secretary of State John Kerry and CIA Director John Brennan suggesting that it may be necessary to cooperate with Assad not only to end the conflict, but also to roll back the Islamic State (IS) and other radical groups, have therefore been met with anger in Ankara.

Given that the majority of Syrians are Sunni, the assumption among diplomats and Turkish experts is that what Erdogan and Davutoglu ultimately want is a Sunni-led government in Damascus with the Muslim Brotherhood at its helm. The fact that Ankara has made its sectarian leanings in the region apparent over these past four years has bolstered this belief. Erdogan and Davutoglu, both of whom have strong Islamist roots, have also felt no need to hide the strong affinity they feel for the Muslim Brotherhood.

That affinity, however, has contributed significantly to alienating Turkey from most of the region’s regimes, which look on the Brotherhood as an existential threat. Its support for the Brotherhood has also raised questions about Ankara’s aims in Syria. There is no indication, however, that Ankara is preparing to revise its Syrian policy in an attempt to regain its lost regional influence. The Davutoglu government also remains vehemently opposed to any role for Assad or his regime in any Syrian settlement.

This position was revealed again when Foreign Minister Mevlut Cavusoglu reacted angrily to Kerry’s suggestion in a CBS interview that it may be necessary to negotiate with Assad.

“What is there to negotiate with Assad? What are you going to negotiate with a regime that has killed over 200,000 people and used chemical weapons?” Cavusoglu responded irately during an official visit to Phnom Penh, when asked by reporters for comment on Kerry’s remark.

Cavusoglu’s words show that the problem for Ankara is not just Assad but his regime, too. The clarification to Kerry’s remarks by State Department spokesperson Jen Psaki is therefore unlikely to have pleased Ankara. In her statement, Psaki repeated Washington’s support for a political settlement in Syria and added, “By necessity … there always has been a need for representatives of the Assad regime to be a part of that process.”

She said, however, “It would not be and would never be, and it wasn’t what Secretary Kerry was intending to imply, that that would be Assad himself.”

While appearing to be in tune with Cavusoglu’s position, statements from European colleagues, such as French Foreign Minister Laurent Fabius, who also criticized Kerry, clearly don’t go far enough for Ankara.

“The solution is a political transition that must both preserve regime institutions — not Mr. Bashar al-Assad — … and include the opposition, of course,” Fabius said in Brussels on March 16.

Reading between the lines of such statements, it must be apparent to Assad that as long as he can hold out, his chances of being part of the solution will increase, regardless of whether it is he or a representative of his regime who is involved in any talks.

Ankara also sees this, which only increases its displeasure. Recent remarks by Brennan are also unlikely to have gone down well in Ankara.

“The last thing we want to do is to allow [IS, Jabhat al-Nusra and al-Qaeda] to march into Damascus,” Brennan said, suggesting that that is what would happen if the Assad regime collapsed and created a political vacuum. He added, “We need to continue to support those elements within Syria that are dedicated to moving Assad and his ilk out, but there has to be some kind of political pathway to the future.”

Ankara’s insistence on a military defeat of the Assad regime appears to be a recipe for prolonging the Syrian civil war. Assad, who continues to get support from Moscow and Tehran, has proven his staying power. The West, meanwhile, much to Erdogan’s annoyance, has made it clear it will not put the boots on the ground that would be required to defeat Assad.

The West has also made it clear that its first priority is to defeat IS, and not to go after Assad. The same applies with regional countries like Saudi Arabia, Jordan and Egypt, which are all part of the US-led coalition against IS. The Davutoglu government, however, continues to believe that targeting Assad should be the main priority, but has no power to bring this about.

Ankara’s dilemma is that a prolongation of the Syrian conflict will only increase Turkey’s headaches in terms of an uncontrolled flow of refugees, a long and porous border that is hard to secure against radical elements, the emergence of an undesired autonomous Kurdish entity in northern Syria and continuing regional isolation due to disagreements with regional countries.

Professor Ihsan Dagi of the Middle East Technical University’s Department of International Relations believes, nevertheless, that it is very unlikely that the Davutoglu government will revise its Syrian policy soon.

“The government is trapped by its own web,” Dagi told Al-Monitor. “A pragmatic government would have used the fact that its Syrian policy is not supported by a large portion of the public and revised it. But this policy has became a question of ideological commitment for the government,” Dagi said.

Ahmet Han, a lecturer in international politics at Istanbul’s Kadir Has University, also believes that Ankara has painted itself into a corner. “The only option Turkey has now is to move with the tide,” Han told Al-Monitor. “The government committed too many mistakes, and this makes it impossible for it to become a meaningful actor in Syria. All it can do now is to try and control the damage,” he said.

Han added that if the United States decides Assad has to be part of the solution, Turkey will have to accept this, saying, “Turkey is a submissive, not a proactive, player today. Its only choice is to tag along or be dragged along. If its resists, it will be increasingly at odds with its allies.”

Retired Ambassador Murat Bilhan, a deputy director of the Turkish Asian Center for Strategic Studies, believes Washington has already decided Assad should be part of a Syrian settlement. He says this will compound the collapse of Turkey’s Syria policy, which, he argues, was misguided from the start, being motivated by sectarian Sunni reflexes that produced nothing in the end.

“Syria will stay closed to Turkey for some time, unless Ankara accepts its mistakes and revises its Syria policy fundamentally. Otherwise, its current impasse will continue,” Bilhan told Al-Monitor. He added that he does not expect a policy revision before the general elections June 7, but believes this might happen after the elections, based on the results obtained by the ruling Justice and Development Party.

Despite nuanced differences in expert Turkish opinion, there seems to be general agreement that the government’s current Syria policy is unsustainable.