Lawmakers have asked the State Department to beef up its support for civil society in Turkey to encourage democratic governance. 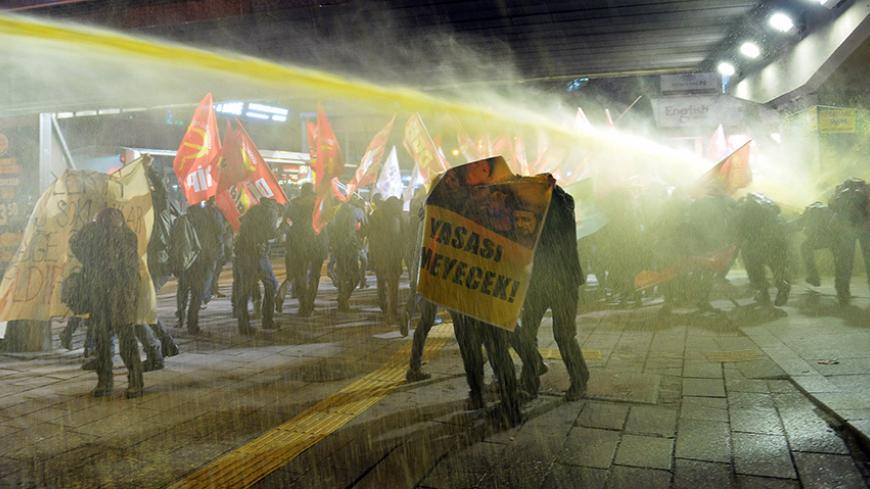 Riot police use water cannon to disperse demonstrators during a protest in Ankara, March 11, 2015. - REUTERS

US lawmakers are pressing the Barack Obama administration to beef up support for Turkey’s civil society as an antidote to Turkish President Recep Tayyip Erdogan’s perceived drift toward authoritarianism.

Five key House members wrote to Secretary of State John Kerry on March 27 urging him to launch a “formal dialogue” with Turkey aimed at strengthening political freedoms. They want the State Department to make clear that democratic governance is just as important as other priorities, such as economic cooperation and trade that already have their own regular bilateral forums.

“We urge you to continue to stress the importance of media freedom, separation of powers, human rights, and the rule of law in your discussions with President Erdogan and other senior Turkish government officials," the lawmakers wrote in a letter obtained by Al-Monitor. "To this end, we strongly recommend the establishment of a formal dialogue with Turkey on these matters in parallel with ongoing discussions on trade and investment, security, and culture and education."

The push is spearheaded by Rep. Bill Keating, D-Mass., who was the top Democrat on the Foreign Affairs panel on Europe last year and now holds that spot on the terrorism and trade subcommittee. Also signing on are the chairmen and ranking members of the Foreign Affairs Committee, Reps. Ed Royce, R-Calif., and Eliot Engel, D-N.Y.; Armed Services Committee ranking member Adam Smith, D-Wash.; and Rep. Tom Rooney, R-Fla., a member of the intelligence and foreign aid spending panels.

"To remain silent on all of this could create the impression that we acquiese — and we don't," Keating told Al-Monitor in an interview in his office. "And if there's going to be joint efforts economically and on other fronts, these are issues that have to be discussed" — lest Ankara conclude that US officials "don't care about that stuff."

The letter comes amid growing signs that Turkey is becoming less free.

Turkey was the world’s leading jailer of journalists in 2012 and 2013, and was responsible for 92% of all tweets removed around the world in the second half of 2014. In its most recent report on Turkey, Human Rights Watch decried the “erosion of media freedom, continuing readiness to limit freedom of expression, restrictive approach to freedom of assembly, and readiness to prosecute demonstrators while tolerating police violence against them.”

Concerns have been growing on Capitol Hill since the crackdown on the Gezi Park protesters in the summer of 2013 and the restrictions on the media and the criminal justice system since the launch of a corruption probe against Erdogan’s government and allies in December. Most recently, attention has turned to the parliamentary debate over a domestic security bill that critics say would give police more powers to arrest and shoot protesters.

"We are very concerned that without a clear statement that human rights, media freedom, and the rule of law are integral to U.S. policy toward Turkey, President Erdogan is likely to step up pressure on his critics, opponents, and others who simply do not agree with his policies and thereby further undermine Turkey's democratic heritage," the letter states. "This would increasingly distance Turkey from the U.S. and Europe, and possibly provoke instability in its own society."

Recent efforts to engage Turkey on the issue have largely fallen flat.

During a campaign rally last year, Erdogan denounced a private letter from lawmakers friendly to Turkey urging him to tone down his rhetoric on Israel. And Turkey's ambassador to the United States, Serdar Kilic, took offense to a hearing by Keating's panel on "The Future of Turkey's Democracy" last year.

@drjwalk future of democracy in Turkey? As bright as a shining star.Not due to hearings like this, but bcs turkish people deserve no less

Keating said his effort aims to create an alternative avenue for such discussions that he hopes will prove more productive.

"There's been a very serious drift and this is meant as one means maybe to create an avenue to come back [to better relations] — and not a threatening one, either," Keating said. "It's something that's meant to bridge rather than build a wall."

Ideally, Keating said, the dialogue would involve high-ranking government officials from both the United States and Turkey, as well as civil society groups. If Ankara doesn't want to get involved, however, he envisions the US side working with Turkish nongovernmental organizations.

He said the idea of a formal dialogue has the support of several Turkish groups, even though some may be reluctant to say so publicly.

"This is something that they very much embrace because they're doing their best in a very difficult environment internally to raise these issues," Keating said. "So anything from the outside will be helpful for them."

Already, congressional sources say they've seen an uptick in US engagement on the issue. They point in particular to President Obama's September 2014 memo requiring senior US officials traveling abroad to "seek opportunities to meet with representatives of civil society," as well as the confirmation around the same time of John Bass to serve as ambassador to Turkey.

The letter starts by acknowledging the administration's recent efforts. In particular it highlights Vice President Joe Biden's meeting with civil society groups during his visit to Istanbul last November.

"Our founders concluded that a concentration of powers was the most corrosive thing that can happen to any system," Biden told the group ahead of a meeting with Erdogan.

"Again, we are encouraged by the strides your Department and the Vice President have made in reaching out to Turkish civil society, and we urge you to increase your efforts," the letter concludes. "As you and President Obama have repeatedly noted, countries that respect human rights and democratic values are stronger and more reliable partners. It is time to apply this maxim to the U.S. relationship with Turkey."