Two top US officials differ about the prospects for identifying, training and equipping a new moderate Syrian force to oppose the group that calls itself the Islamic State. 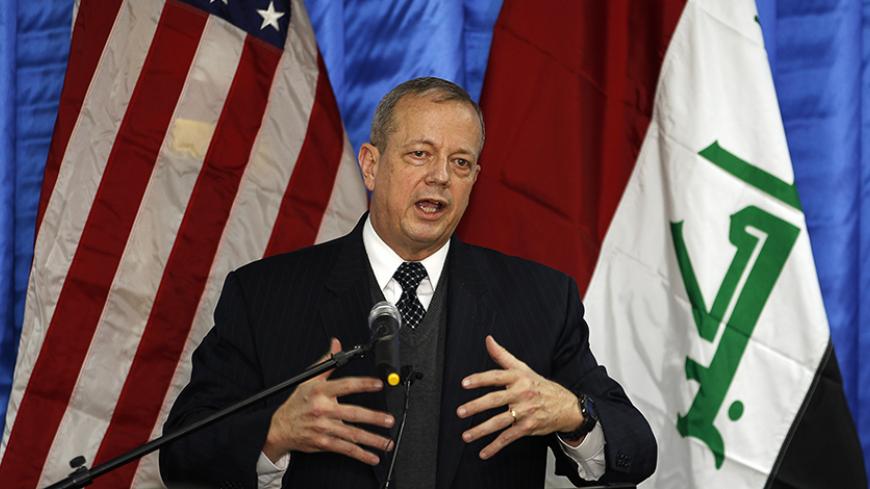 John Allen speaks to the media during a news conference at the US Embassy in Baghdad, Jan. 14, 2015. - REUTERS/Thaier Al-Sudani

WASHINGTON — The retired Marine general in charge of mobilizing an international coalition against the group that calls itself the Islamic State (IS) says that the United States has not ruled out a no-fly zone or protected corridor in Syria to safeguard the thousands of fighters it intends to train to help defeat the militant group.

“All those things are under consideration,” John Allen told an audience the evening of March 2 at the Atlantic Council, a Washington-based think tank.

Allen bristled when asked if the 5,000 moderate Syrians that the United States says it plans to train each year for the next three years in Turkey, Qatar and Saudi Arabia would face certain death once injected onto the battlefield. “We will protect them when the time comes,” Allen said.

Syrian opposition forces and Turkey have long urged the Obama administration to establish a protected zone in northern Syria along the Turkish border to reduce the number of refugees streaming out of the country and make it easier for the opposition to the regime of President Bashar al-Assad to govern a piece of liberated land. But the White House has so far resisted these appeals and since last summer has focused less on confronting Assad than on defeating IS forces that have seized a third of Syrian territory and Sunni Muslim areas in Iraq.

Fred Hof, a former US official and a Syria expert at the Atlantic Council, told Al-Monitor that Allen’s remarks about a no-fly zone “was more than an implication. It all comes down to the decision of one man [President Barack Obama].”

The Obama administration has also seemed ambivalent about training and equipping Syrian fighters. Disillusioned with the leadership of the Free Syria Army it once tepidly supported, the United States now has plans to train a new force from scratch.

According to the Pentagon, about 1,200 Syrians have begun the vetting process to join this force. Pentagon spokesman Rear Adm. John Kirby told reporters last month that the fighters will get basic training, including communications and command and control skills that could enable them to assist the coalition in more accurately conducting airstrikes against IS strongholds in Syria.

“It’s not about, you know, creating a wing of forward air controllers,” Kirby said, but it could be “useful to have eyes on the ground to help us be more precise.”

Allen was upbeat when asked about the prospects for the force. “We are pleased with the numbers who have said they would be part of this, pleasantly surprised,” he told the Atlantic Council.

However, another senior US official was more skeptical.

Retired Lt. Gen. James Clapper, the director of national intelligence, told the Council on Foreign Relations just a few hours before Allen spoke that it was going to be a “challenge” to recruit, vet and train a sufficient number of moderate Syrians to have “a significant impact on the battlefield.”

Increasingly, forces in Syria opposed to the Assad government have gravitated toward militant Islamic groups, including IS and Jabhat al-Nusra.

According to Clapper, there are at least 1,600 armed groups in Syria now. “Determining their size and capability and ideological leanings is very difficult,” he said. Asked how he would define moderate, Clapper said, “anyone not affiliated” with IS.

Allen, appointed by Obama in September to assemble and manage a coalition that now includes 62 nations, said that the situation is somewhat less murky in Iraq, where the United States is backing the central government in Baghdad and has Kurdish peshmerga and other Iraqi forces serving as the boots on the ground.

Allen praised Prime Minister Haider al-Abadi for seeking to form an inclusive government and noted that a 2015 budget now under consideration by the Iraqi parliament includes funding for local national guard forces that may be better able to take back territory from IS in Sunni Muslim areas than the predominately Shiite Muslim forces fielded by Baghdad.

Allen declined to say when Iraqi forces might be ready to try to recapture Mosul, the country’s second-largest city. There have been news reports that such an operation would begin as early as April.

“It’s less about timing than the preparation,” Allen said. The forces that clear IS from Mosul must also be prepared to hold it and provide urgently needed humanitarian relief, he added. “These populations have endured enormous abuse and deprivation.”

Allen noted that there is a battle underway to liberate Tikrit, the hometown of the late Iraqi dictator Saddam Hussein. No US forces are involved. Instead, Iran is providing advisers and air support.

Allen told Al-Monitor that the United States is not coordinating with Iran but acknowledged Iran has “supported Iraq in important ways” since last summer when IS forces stormed into Mosul and reached the suburbs of Baghdad.

He also acknowledged the challenges posed by Shiite militias, which have committed abuses against Sunni populations.

“How liberated populations are treated will determine in the end whether the Sunni population chooses to be part of this experiment” and Iraq remains a unified state, Allen said. While IS advances have been blunted, “the results are as yet uncertain … Iraq has a tough road ahead.”