A No-Fly Zone in Syria? It's a Trap

In the absence of conditions needed to implement a successful no-fly zone, as well as the “dangers of perpetual patrol,” the US and its allies should continue to avoid the no-fly zone trap and work with regional leaders and Syrian opposition groups in negotiating Assad’s fall. 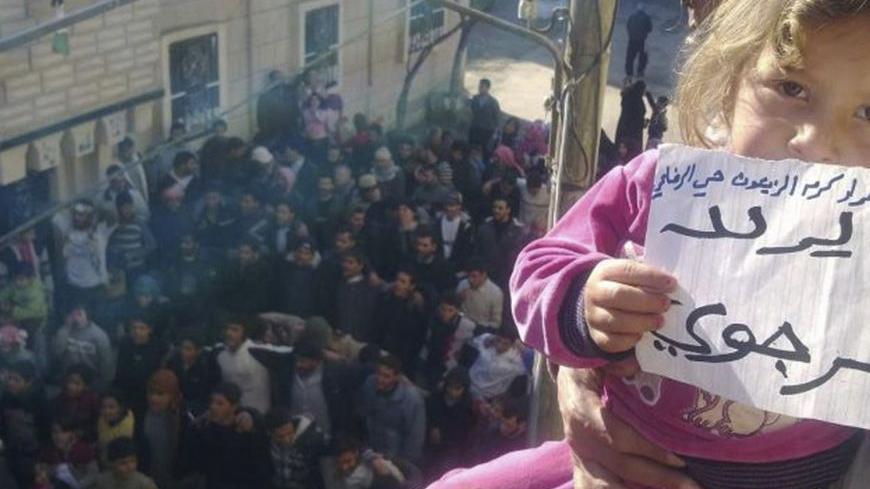 A girl holds a sign reading: "People want a no fly zone" during a demonstration against Syrian President Bashar al-Assad in Homs, December 27, 2011. - REUTERS

As the United States and its allies seek ways to end the Syrian bloodshed and devise feasible scenarios for a post-Assad Syria, options for intervention have resurfaced. France has suggested a possible no-fly zone that oversteps UN Security Council approval, as well as its willingness to recognize a Syrian transitional government as soon as it is formed. Turkey is pressing for a buffer zone in the northern border region. And even though the Obama administration is reticent to intervene militarily, its “responsibility to protect” policy leaves open the possibility of a “partial no-fly zone.” These options would alleviate immediate suffering; however, they are based on humanitarian principles and not a political solution. If extended over the medium term, they could have deleterious consequences on the territorial sanctity of the post-Assad state.

Although some may refer to NATO’s Libyan intervention as a successful no-fly model, this outcome is unlikely to be replicated in Syria unless the US and its allies can cripple Assad’s military and air defenses from the outset. Even then, since a no-fly zone is a means to an end, it requires clear and shared political objectives among allies — either to deter Assad or remove him from power. Both options would require effective air power and military support on the ground, in coordination with unified opposition forces and peacekeeping operations. None of these conditions are present or likely to become available in the immediate future.

In fact, despite ongoing calls for international intervention by some opposition groups, an effective no-fly zone in Syria still has no international, regional or domestic buy-in. A large gap remains between the near unanimous sense of obligation to protect Syrian civilians and the means required to do so. Recently updated digests of US and global opinions on the Syrian crisis compiled by the Council on Foreign Relations and the Program on International Policy Attitudes and a recent CNN poll indicate that while a clear majority of world opinion supports a no-fly zone enforced by the US and its allies, it is unsupportive of military engagement. The poll also reveals negative regional attitudes toward the US role in the Syrian crisis thus far. Without regional backing or a mandate to engage the enemy, any potential no-fly zone would be rendered ineffective and potentially destabilizing from the outset.

Limited terms of engagement undermined the credibility of the no-fly zones imposed in post-Gulf War Iraq. Pilots could engage only when they were directly threatened, which allowed Saddam Hussein to encroach upon Kurdish populations on the ground. The small local patrols and humanitarian relief operations implemented alongside the no-fly zone certainly provided security and prevented some incursion; however, they did not fully deter threats by the Iraqi army. In the Kurdish north, relief trucks were sporadically bombed, villages were burned, and aid workers were killed without retaliation against the Iraqi regime.

The Iraqi case also reveals that an extended no-fly or safety zone could encourage the further fragmentation of the Syrian state. The uneven availability of international protection, alliance structures, and security forces in particular regions of Syria would likely reinforce growing fissures between groups and regions. Depending upon the nature of external support over time, different nationalist, religious and tribal communities could take advantage of their protected enclaves by advancing their own group agendas that challenge Syrian state unity. One of the by-products of the northern Iraqi no-fly zone and its accompanying 12-year safe haven is the present-day Iraqi Kurdish quasi-state.

Regional states have their own political baggage that could further complicate the efficacy of a safety zone and unsettle local relations. For instance, many Syrians are skeptical of Ankara’s calls for a buffer zone. Some worry about the influence of a Muslim Brotherhood regime backed by Istanbul while others are concerned about Turkey’s ambitions to extend its control over Syrian territories, referring to the 1938 İskenderun annexation and unresolved Cyprus problem. Still others see a buffer zone to control refugee flows in northern Syria as a pretext for Turkey to root out the PKK problem and shape the region in a post-Assad state.

In the absence of necessary conditions to implement a successful no-fly zone, as well as the “dangers of perpetual patrol,” the US and its allies should continue to avoid the no-fly zone trap and work with regional leaders and Syrian opposition groups in negotiating Assad’s fall. Humanitarian assistance also should be made available to local populations when it can be neutrally administered in a relatively secure environment. These opportunities for international assistance do not replace a political solution, which cannot fully advance until a credible and representative Syrian opposition group is formed and sustained.

Denise Natali holds the Minerva Chair at the Institute for National Strategic Studies (INSS), National Defense University and is the author of The Kurdish-Quasi-State: Development and Dependency in Post-Gulf War Iraq. The views expressed are her own and do not reflect the official policy or position of the National Defense University, the Department of Defense, or the US government.