Following the signing of the GCC Internal Security Pact, the recent detention of opposition activists in Kuwait highlight a worsening plight for social dissidents across the region. 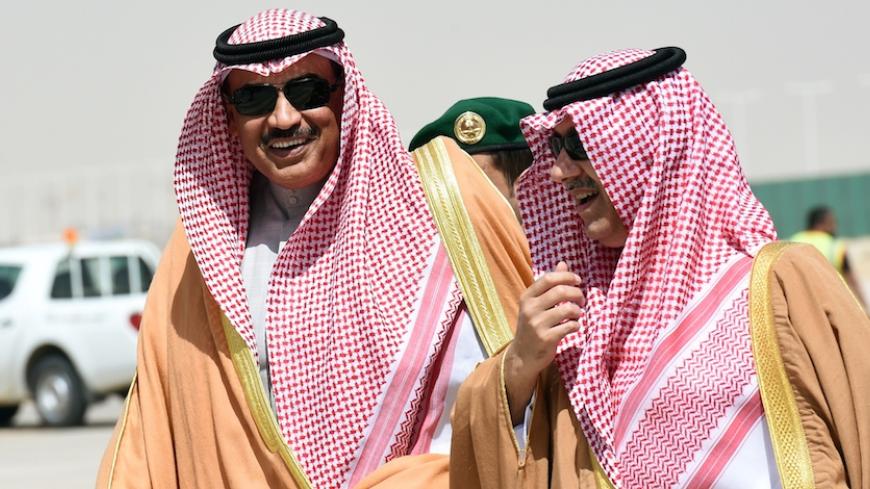 The Saudi-backed Gulf Cooperation Council (GCC) Internal Security Pact signed by Saudi Arabia, Qatar, Oman, Bahrain, the United Arab Emirates and Kuwait is now in full swing. It has truly ushered a new era of Pax Saudiana across the Gulf. The agreement was proposed in 1982 but remained under discussion until all GCC countries accepted its terms. The last country to ratify the pact was Kuwait. Ironically, the first casualties of this controversial agreement that took almost three decades to be ratified are Kuwaiti activists. Since January, at least three Kuwaiti opposition figures, social media activists and heads of political movements have been detained at the request of the Saudi authorities. Meant to enhance security for economic development and stability of GCC countries, the pact has now tuned into creating cross-border controls, evacuating the Arab Gulf of dissent and eliminating safe havens for dissidents of one country in another one.

The first casualty was Hakim al-Mutairi, an Islamist graduate in religious studies at Birmingham University and founder of the Umma Party in 2008, a Salafist transnational movement seeking political change by elections. His party aspires to create a Muslim society, implement Sharia and free the Gulf from the presence of foreign troops. Although the party remained unlicensed in Kuwait, it was tolerated up to a certain extent. In several books, Mutairi — who belongs to a large tribe in both Saudi Arabia and Kuwait — critically scrutinized the texts of Saudi Salafists, reprimanding them for rejecting elections and pluralism. He warned in "Liberty or Deluge," one of his most popular books, of the perils of the subjugation of religion by kings and princes, restrictions on freedoms and criminalization of opposition. In another book, he offered a reinterpretation of Gulf history, depicting the kingdom and emirates as foreign creations serving the interests of an ongoing colonialism. He described Gulf citizens as “slaves without chains.”

Mutairi’s ideas and activism echoed across the Gulf. In 2011, and under the euphoria of the Arab uprisings, a group of professors, activists and lawyers announced the formation of a Saudi Umma party. Needless to say all founders were immediately imprisoned. The spokesman of the party, Muhammad al-Mufrih, was outside Saudi Arabia at the time and continued to issue statements from Istanbul where he took refuge and passed away in 2014. In December 2014, in an interview with TV station Al-Shorouk, Mutairi accused Saudi Arabia of poisoning Mufrih. When he returned to Kuwait, he found that the Saudi authorities had filed a case against him, and thanks to the GCC Internal Security Pact the Kuwaiti authorities detained him. He was released on bail after paying a large sum.

On March 15, Tariq al-Mutairi, a Kuwaiti opposition activist and head of the Civil Democratic Movement, was detained also at the request of the Saudi Foreign Ministry, according to the Kuwaiti Ministry of Interior. According to his lawyer, the charges include “acts of aggression against a foreign country — i.e., Saudi Arabia — undermining the reputation of Kuwait, openly calling for overthrowing the regime and misusing his phone.” Tariq's and Hakim's recent activism in participating in a demonstration in support of famous Kuwaiti opposition figure Musallam al-Barrak, currently serving a two-year prison sentence, must have angered the Kuwaiti government. Tariq created a Twitter hashtag to free Barrak and more than 2,000 Kuwaitis joined the demonstration.

In addition to honoring the emir’s persona as someone beyond criticism, Kuwaitis must also respect the Saudi king, and refrain from any critical tweets that undermine him and many other sacrosanct persona across the Gulf. Mohammed al-Ajmi, a famous Twitter activist known as Abu Asm was also detained simply because he tweeted a statement interpreted as disrespectful of Saudi King Abdullah bin Abdul-Aziz when the latter passed away on Jan. 23. Abo Asm declared on Twitter: “I cannot mourn any Gulf leader, this is my sentiments, but at the moment of death, I do not rejoice, I keep quiet.” His detention angered his followers who launched more hashtags calling for his release.

Kuwaiti civil society is one of the most vibrant in the Gulf, hence its early rejection of the GCC Internal Security Pact, which was interpreted as yet another attempt to silence dissent in their own country. Many Kuwaiti activists resented Saudi hegemony, which the pact is meant to strengthen not only in the small emirate but the other ones, too. It is evident now that criticizing Saudi Arabia is taboo, the violation of which definitely leads to perhaps several years in prison. Kuwaiti apprehensions were not unfounded but they couldn't do much about the treaty that was ratified by their parliament. Several opposition groups boycotted the elections that eventually produced a docile body.

On the other side of the border, there was no debate or controversy related to the pact as Saudis are completely disenfranchised. The only consultative council they have is appointed by the king and has no power to discuss security pacts with the GCC or other countries.

Pax Saudiana is definitely being felt across the Arabian Peninsula with the exception of Yemen, which is slowly escaping the grip of its wealthy neighbor to the north. This Saudi hegemony comes with a heavy burden, mainly silencing opposition and interfering in the freedoms in countries such as Kuwait, which is politically more vigorous and developed than “Big Brother, known in Arabic as “Big Sister.”

However, there is more to the recent detentions at the request of Saudi Arabia than simply freedom of speech. Regardless of their ideological affiliations, all the detainees belong to tribes that have historically lived between Saudi Arabia and Kuwait. Also all the detainees have gone beyond their Bedouin way of life to acquire education, political visions and determination to be part of states established when they were lacking skills. The governments of most GCC countries prefer the tribal Bedouin population to remain as part of folklore. Their ancient tents, camels and coffee pots are a reminder of a pure Arabian heritage, lost under the pressure of globalization, foreign labor populations and the ethnic diversity of the coastal states. So Gulf leaders, including the Kuwaitis and Saudis, prefer the Bedouin to be in the museum and the folklore heritage festivals rather than in public squares, demonstrating against corruption and calling for true citizenship.

The Saudi regimes disenfranchised the tribes, whose solidarities are now fragmented and less likely to stage rebellions along the ones that the Saudi leadership had to deal with in the 1920s and 1930s. But Saudi Arabia more than Kuwait knows well that the tribe remains a potential space for mobilization and solidarities as the regime itself played this game under the guise of Islamizing the tribes of Arabia. The tribes themselves contributed to the creation of the realm that later on disenfranchised them. So, Saudi Arabia fears the simple names of those Kuwaiti detainees who have cousins across the border inside Saudi Arabia itself. The kingdom the tribes had created could not tolerate them later on, simply because they are depicted as independent, disloyal and even blasphemous. With the exception of their military spirit that was used by the founder of the kingdom to expand his realm, the tribes lagged behind in education at the time of the creation of the kingdom in 1932. Today, not only Saudi Arabia but also Kuwait have to manage a different citizen, namely the "tribal moderns” who speak the language of human rights, freedom of speech, civil society, accountability, anti-corruption, elections and democracy. Such slogans are written on placards, chanted in demonstrations in Kuwait and virtually circulated in Saudi Arabia, as demonstrations are banned.

The tribal moderns may endorse Islamism, or liberal democracy, but the fact of the matter remains constant. From the perspective of regimes, they are a dangerous bunch, simply because if they invoke tribal solidarities, they may be heeded by their fellow cousins, both imaginary and real.

No doubt, activists in Kuwait and other GCC countries will fall under the heavy weight of a pact designed above all to control, monitor and punish dissidents. The GCC itself may not move from cooperation to unification in the near future but it has certainly become yet another mechanism to silence peaceful and legitimate opposition across borders.