Palestinian prisoners have staged protests in Ramon Prison in Israel, and during March protests are expected to expand to other prisoners and the broader Palestinian community. 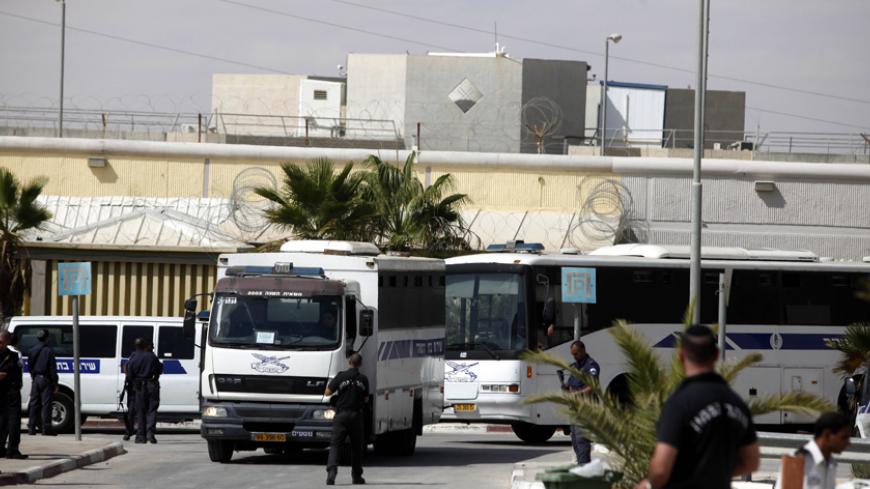 Throughout history, liberation struggles have been waged inside prisons as much as outside them. When a national struggle stagnates, it is often the prisoners who remind the rest of the nation of the purpose and goals of their fight. February 2015 has proven to be an especially difficult month for Palestinians held in Israeli jails, in Ramon Prison in particular. Unlike other detention facilities, which have long descriptions and photos on the official Israel Prison Service website, Ramon Prison, located in the Negev Desert, only has a short description on its web page: “This prison is located on Ramon Mountain, right next to Nafha Prison. It was established in 2006 to keep security prisoners in custody.” The security prisoners, that is, the 920 Palestinians being held there, are on the verge of initiating a major protest likely to spread throughout the prison system.

According to the Palestinian Prisoners Club, a nongovernmental organization focusing on the situation of Palestinian inmates, during the second half of February, Ramon experienced a sharp increase in tensions after the transfer of four prison leaders — Zeid Buseis, Ahed Abu Ghelmeh, Mohammed Muali and Jamal Abu al-Hijia — and other actions intended to forestall expected protests demanding an end to solitary confinement and administrative detentions.

This led prison officials to place four Islamic Jihad prisoners in isolation cells. The following day, according to a Prisoners Club Report, Islamic Jihad inmates returned their food trays untouched and refused to participate in the prisoner count, conducted twice a day to ensure that no one has escaped. On Feb. 23, tensions further escalated when a prisoner from Gaza, Hamzeh Abu Sawwen, attacked a prison guard. In response, guards beat Abu Sawwen badly enough that he was taken to the prison hospital for treatment.

Press reports from Feb. 26 indicated that negotiations between Hamas prisoners from Ramon and nearby Nafha Prison, also representing Islamic Jihad inmates, and Israeli security officials had failed to reach a solution. As a punitive measure, prison authorities closed the wing in Ramon where Islamic Jihad prisoners are held. When news of the failed negotiations became known, prisoners belonging to the Fatah movement joined the protests in solidarity.

As is often the case, tensions in prison are often reflected beyond the jail cells. A social media campaign featuring the slogan “This person is in solidarity with Palestinian prisoners” was begun in support of those incarcerated in Israeli jails. Posts on Twitter and Facebook spread information about the strike and prodded the broader population to support their brothers in jail.

With Israeli general elections scheduled for March 17, it is unlikely that Palestinian prisoners will begin an all-out hunger strike during the first half of March. Sources close to the prison movement told Al-Monitor, however, that the coming days will witness an escalation in the prisoners' protests to include the refusal to accept visitors, a move that often results in simultaneous protests outside the prison wall. Such public protests, paralleling events in the prisons, are likely to continue throughout March.

The most followed protest will be the hunger strike. Based on past events, it is expected that prisoners will begin with refusing to accept a single meal and then a gradual hunger strike will ensue, aimed at developing into a total hunger strike across the entire Israeli prison system, which incarcerates more than 7,000 Palestinians. The protests are likely to escalate further in April, climaxing on April 17, which is commemorated throughout Palestine and abroad as Prisoners' Day.

Prisoners are often the forgotten element in a national struggle, but eyes turn to them when other elements of the struggle are stalled. The current political stalemate in the Palestinian-Israeli conflict and the rumblings in Israeli prisons indicate that the prisoner front will most certainly be the one to watch in the coming weeks and months. When Palestinians are divided and fail to bring attention to their cause, one often sees an attempt to give priority to the struggle of prisoners, a much more united and resolute segment of society.