Is the Oslo process really over?

The Palestinian Central Council announced the end of security cooperation with Israel, though many are skeptical that the decision will be implemented. 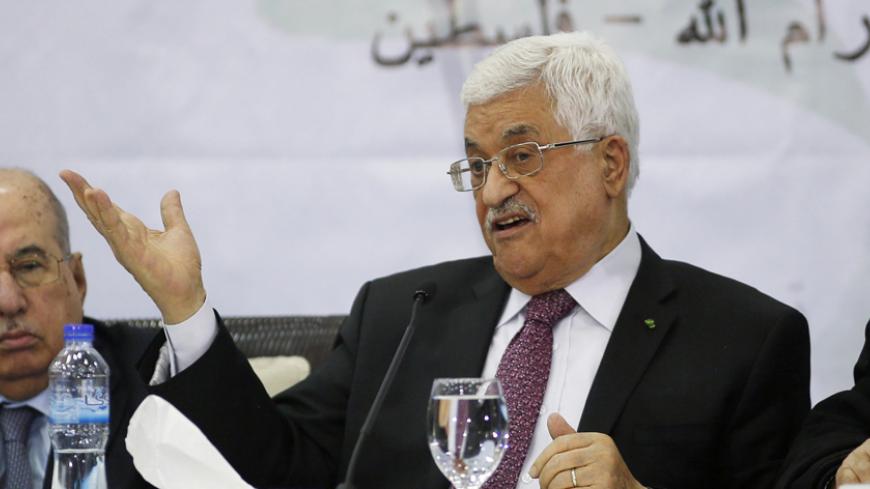 Palestinian President Mahmoud Abbas gestures as he speaks during a meeting of the Central Council in Ramallah, March 4, 2015.

A headline featured on the website of Al-Quds, a Palestinian daily, was very clear: “The decision of the Palestinian Central Council means the end of the Oslo era.” The headline was taken from a quote by council member Mustafa Barghouti of Al-Mubadara Party, following the conclusion of the council's two-day meeting March 5.

But did the Palestinian Central Council really end the 1993 memorandum of understanding between Israel and the PLO, which is commonly referred to as the basis of the Oslo Accord?

The fifth clause of the council’s recent communique comprises six points and deals with Palestine's relationship with Israel. The first point states that “Israel will be held responsible for the welfare of the Palestinian people as an occupying power according to international law.” The resolution's most important point follows, calling for the “end of security coordination, in all its forms, with the Israeli occupying authorities, in light of its failure to adhere to the agreements signed between both parties.”

Political analyst Hossam Ezzedine told Al-Monitor that the statement regarding the "end of security coordination" should not be taken too seriously. “The aim of the resolution is to warn Israel that the Palestinian side will begin the process of separation from the relationship that has been ongoing with the occupiers since the signing of the Oslo Accord,” he said.

Ezzedine, however, said that it's too early to determine whether the council is ready to end all cooperation with Israel. The Ramallah-based analyst told Al-Monitor that the Palestinian Authority is not yet ready for such a major change. “I believe that this decision is more of a media and diplomatic threat rather than an actual decision that will be enforced,” he said.

Nayef Hashlamon, president of Al-Watan Center for Media and Development, believes that ending security coordination would be meaningless without a more strategic plan to end economic cooperation, including the abrogation of the Paris Protocol.

The founder of the Hebron-based center told Al-Monitor that the real break will occur when the Palestinians can find an economic alternative. “They need to stop economic dealings with Israel and deal economically only with the neighboring Arab countries,” he said.

Khalil Jahshan, a Palestinian-American lecturer in international studies and languages at Pepperdine University, expressed skepticism regarding the decision’s implementation on Twitter. “I doubt [Mahmoud] #Abbas' intention to immediately implement the #PLO decision to end security coordination with Israel,” he wrote.

Hazem Kawasmi, president of the Freedom Forum Palestine, also doubted that the decision would be implemented. Kawasmi said that the council decision “will not disturb” Israel because it is nothing more than a slogan. “The real guarantor of security and stability in the West Bank is President Mahmoud Abbas himself, who will not allow chaos to prevail,” he said.

Kawasmi pointed out that the decision is only a recommendation. “The resolution recommends the PLO’s executive committee to carry it out whenever it deems it appropriate,” he said. Judging by the resolution's twelfth clause, Kawasmi is right. It reads: “The [council] will meet every three months and the executive committee will be charged with enforcing this resolution and will provide a report to the next session of the council.”

Despite the many Palestinian skeptics, there is no doubt that a clear shift in Palestinian public opinion is being taken seriously by the leadership. While Abbas might try to pressure Israel before revealing when and how this decision will be implemented, it's clear that he can no longer push this popular demand under the rug for too long.

If the council meets in the next three months, Israel's March 17 elections will be over and a ruling coalition will most likely be established. Along with the decision to pursue Israel’s war crimes at the International Criminal Court — which the council also unanimously endorsed — the end of security coordination would be a major blow to the false calm that Israel has felt for years, and a true end to the Oslo era.

The situation on the ground must improve, and serious progress must be made in delineating the borders of the state of Palestine, before Abbas will go back on this decision.