With Palestine joining the International Criminal Court and suspending the security cooperation with Israel, Palestinians hope to isolate the Israeli state internationally and make it pay for its occupation and war crimes. 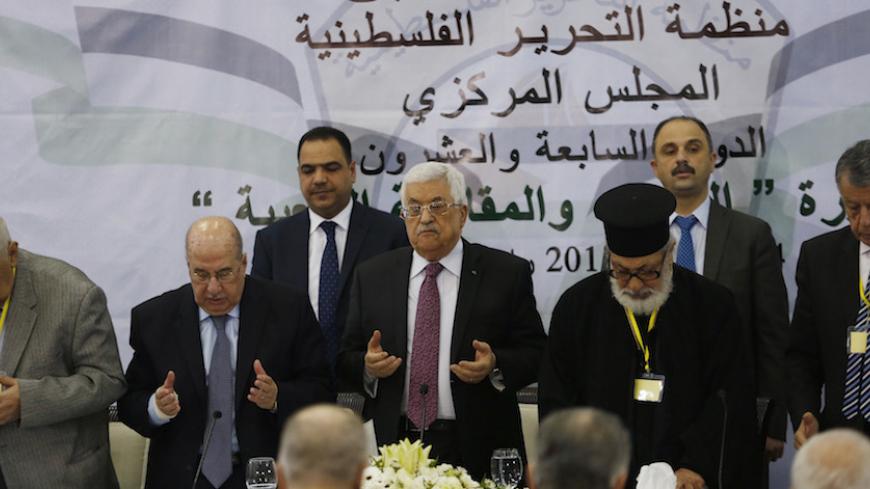 Palestinian President Mahmoud Abbas (C) prays at the start of a meeting for the PLO's Central Council, in the West Bank city of Ramallah, March 4, 2015. - REUTERS/Mohamad Torokman

Weeks before the results of the Israeli elections were known, the Palestine Central Council (PCC) met in Ramallah to decide on the Palestinian strategy. Somehow anticipating a continuation or a shift to the hard right, the council resolved on March 5 to give Palestinian President Mahmoud Abbas the mandate to suspend security cooperation and to move ahead with the ongoing efforts at the International Criminal Court (ICC).

The United Nations declared that the nonmember state of Palestine will become a full legal member in the ICC on April 1. Palestine will reportedly sue Israel for war crimes in the Gaza Strip, as well as the perpetual war crimes in terms of the illegal settlements in the occupied territories.

The move toward a proactive strategy comes after years of futile negotiations with an Israeli protagonist that talks about peace, but acts with tanks and bulldozers. Now that Israeli Prime Minister Benjamin Netanyahu’s anti-peace and racist ideology has become public, the rest of the world has seen what Palestinians have known for decades: that the Israelis are not serious about peace.

Despite this prophetic knowledge, however, Palestinian options are limited. Short of a violent uprising, which in the past has brought disastrous results, the Palestinians’ main option is to help further isolate Israel internationally and to make its occupation costly.

To further isolate Israel, the Palestinians will be pushing hard to show the world that the so-called only democracy in the Middle East is in reality implementing an apartheid regime against 4 million Palestinians. Palestinians living under Israeli military control are disenfranchised and are denied their basic political rights. If the idea of a Palestinian state is no longer on the books, as per the statement of Netanyahu on the eve of the elections on March 16, this automatically means that the majority of Palestinians in Palestine are being ruled by the Israeli minority.

The crime of apartheid is extremely important because it carries international legal weight. When the apartheid crime became part of international humanitarian law, it provided the world with a legal mechanism to sanction Israel. If Palestinians can succeed in assigning the term apartheid to Israel’s rule in the occupied territories, the world’s leading powers will have the legal instrument to escalate economic sanctions against the government in Tel Aviv.

While much of the effort to isolate Israel will need to be done internationally, Palestinians themselves have the option to make Israel’s occupation much more costly. Ever since the Palestinian Authority (PA) was established in May 1994 through the Oslo Accord, Israel was practically relieved from the financial and administrative burden — not to mention the security nightmare — of directly ruling a large hostile population. The Oslo Accord was a perfect mechanism for Israel to be relieved of security obligations in the Palestinian-populated cities in Area A (under full PA control), while also being relieved from administrative and financial responsibilities for an even larger swath of land in Area A and Area B (under Palestinian civil control but joint Israeli-Palestinian security control).

Palestinian leaders, who accepted this unfair and unjust classification of Palestinian lands, were able to justify their decision by saying that this was a transitional plan. But what was a five-year transitional plan that was supposed to end in 1999 has now become a 20-year-old nightmare that only benefits Israel while sapping the Palestinians.

The PCC’s decision to suspend security cooperation is a devastating blow for Israel. Without security cooperation, the Israelis will be forced to return to man the old city of Nablus and downtown Ramallah, Jenin and Bethlehem — an act that will put an end to the charade called PA, Palestinian police or the grandiose government of the state of Palestine. Palestinians think the suspension of security coordination, rather than the unilateral dissolving of the PA, will force Israel to pay a price for its occupation.

Isolating Israel internationally and forcing it to retake the job of the PA will not be easy on the Palestinians, nor will Israel accept it without a fight. After Netanyahu cobbles together his third coalition government in a row, it will not be surprising if we see a concerted charm offensive. The pre-election statement will be finessed as part of the electoral campaign and Israel will say clearly and repeatedly that indeed it wants peace with its Palestinian neighbor. The Palestinian tax money will be returned and Gaza’s siege will be eased.

Palestinians would be foolish to fall for that again. A well-known Arab proverb says, “A believer is not stung from the same hole twice.” It would be tragic if after a populist Israeli leader publicly utters that when elected his government will not support a Palestinian state to engage again with such a deceitful politician.

The best Palestinian strategy is no longer a defensive reactionary one. Palestinians need to go on the offense and be proactive in using nonviolent means, both at home and abroad. For such a strategy, which will be costly to the Palestinian people, the leadership needs to prepare the public and be united in its goals and tactics. Before launching such an effort, the No. 1 priority requires that Palestinian unity be ensured of goal and purpose in order to launch what will require a lot of sacrifices to reach the goal of freedom and independence.