The US decision to recognize Jerusalem as Israel’s capital is seen by many Palestinian leaders as a unique opportunity to seriously work on achieving national unity. 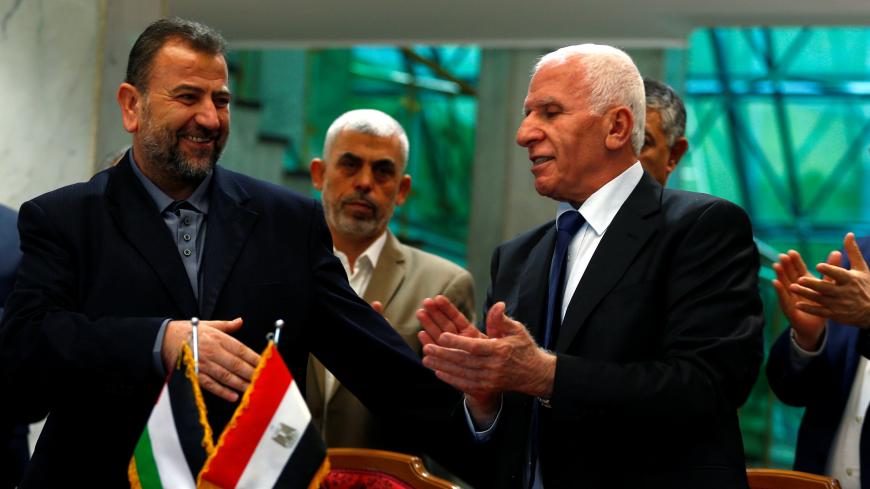 Palestinian leaders are seriously considering a major shift in strategy that will include attempting to add key countries as international sponsors of the peace process. Serious considerations will be given to the relationship between Palestine and Israel that was set up during the two-decades-old Oslo process.

In an interview with the London-based Al-Hayat daily Dec. 25, senior Fatah leader Azzam al-Ahmad said that the Palestinian Central Council (PCC) will meet in mid-January 2018 to declare Palestine a “state under occupation.” He said that Palestinians can’t continue with its relationship with the Israeli side while it denies “our people’s rights in a capital in Jerusalem.”

It is not clear if delegates from Hamas and the Palestinian Islamic Jihad will attend the upcoming meeting. Ahmad said in his Al-Hayat interview that a request by Hamas to hold the PCC meeting in Lebanon was turned down and Ramallah was chosen as the location for the upcoming meeting.

PLO Executive Committee member Asaad Abdel Rahman told Al-Monitor that he plans to submit a request in the upcoming PCC meeting according to which Israeli officials responsible for the illegal settlement activities — especially in Jerusalem — should be put on trial at the International Criminal Court (ICC). “All the legal paperwork is ready, and we should be able to declare the names of the Israeli criminals that must be tried for war crimes,” he said.

Abdel Rahman insists that such a case should not be delayed any longer because every delay “makes us responsible collectively for the expropriation of lands in Palestine and Jerusalem.”

Abdel Rahman, an independent who is not connected to any faction, is convinced that now is the most opportune time to make the Israelis pay a price for their occupation. “We are now relatively free of the United States’ imposed conditions that have shackled our ability to approach international organizations such as the ICC. We must use this window of opportunity to force Israelis to pay a price for their occupation and illegal settlement activities.”

He said that it is a duty for every Palestinian to make sure Israel is held accountable. “The days of impunity are over. Since the US decision on Jerusalem, the illegal Israeli settlement activities have been sharply increased.”

Tayseer Khaled, another PLO Executive Committee member from the Democratic Front for the Liberation of Palestine, said Dec. 26 that the upcoming meeting should begin its deliberations by revisiting earlier decisions made in the last meeting of the PCC held in March 2015. “It was decided in the 2015 meeting to end our connection with the Oslo Accord and the security coordination with Israel, but this has not happened,” Khaled said.

Nabil Shaath, a senior adviser to President Mahmoud Abbas, was dispatched to Russia and China to assess their willingness in being involved in multinational mediation. “The reception we received in Moscow and Beijing was top notch. They enthusiastically supported our efforts to create a new mechanism to sponsor the peace process that includes Europeans, Russians and Chinese,” Shaath told the Saudi daily Arab News in its Dec. 24 edition.

While much of the political rhetoric has been against Israel, few calls have been made to punish America or even exclude it totally from the peace process. Pundits have argued that Palestinians need the United States in order to put some pressure on Israel.

Osama Al Sharif, a journalist and political commentator based in Amman, argues in a Jordan Times opinion piece Dec. 26 that, in theory, the United States is the only country that can apply pressure on the Israelis. “As we have seen during the [Barack] Obama presidency, there are limits to US sway on Israel. Abbas needs the international community to convince the US to do so. After all is said and done and unless the regional balance of power changes dramatically, the US role in finding a lasting peace remains essential and indispensable.”

Events on the ground in the last few weeks have shown that a new generation of Palestinian resisters is proving that the Palestinian cause is alive and well with young people. Support for Palestinians has not been limited to the occupied territories but has spread throughout the world.

More and more calls have been made to ensure that the current level of local, regional and international involvement should be translated into action. Many hope that this excitement and energy will be channeled properly to create new ideas and leaders that are closer to the people on the ground and are not shackled with the ways of the past.

The US decision is seen by many Palestinian leaders as a unique opportunity to rise up to this occasion by working seriously on national unity. Calls for a serious end to the Palestinian split and a unity of purpose have been on the rise in various Palestinian circles, with many thinking about the best approach forward that can preserve the steadfastness of Palestinians on the ground while making the occupiers pay a much higher price for their illegal occupation, colonial settlements and denial of Palestinian rights.