Many families of the Gaza Strip have lost their conventional breadwinners, pushing women to tap into mushroom cultivation as a vital alternative. 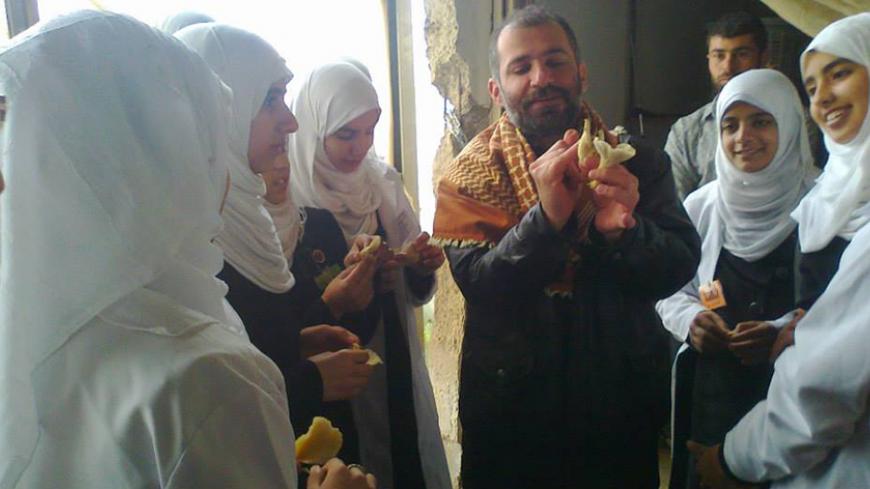 Girls from a high school in the Gaza Strip attend a class on growing and cultivating mushrooms in this undated photograph. - Palestinian Ministry of Agriculture

GAZA CITY, Gaza Strip — Shaima al-Amoudi tries to maintain the insulated room on her rooftop in the city of Khan Younis in the southern Gaza Strip. She prevents light from entering the room as much as possible, and keeps the humidity high, in an effort to succeed in cultivating mushrooms to improve her family’s financial situation.

Amoudi, a mother of seven, began planting mushrooms nearly two years ago. “My husband does not have a stable job," she told Al-Monitor. "He works on and off, which provides an income of no more than 500 Israeli shekels [$120] per month. Due to the lack of better job opportunities that would contribute to the improvement of our income, I began to grow and sell mushrooms to restaurants.”

Growing mushrooms is one of the very few options women in Gaza have to face poverty and unemployment that has been prevalent ever since the imposition of the Israeli siege on Gaza in 2007. Doing such work to earn a living does not require much capital, and the production cycle is short, which contributes to a faster profit, according to economic expert Samir Hamattu. In addition, mushrooms are easy to plant and sell.

“There are several reasons why women were forced to break into the labor market through individual projects such as mushroom cultivation, to help support their families," Hamattu told Al-Monitor. "Deterioration of families' financial income plays a major role, in addition to the Israeli wars that have turned thousands of workers into unemployed individuals while hundreds of families lost their main breadwinner.”

The unemployment rate in Gaza is 42.8%, while the poverty rate is 65%, according to 2014 fourth-quarter statistics from the Palestinian Central Bureau of Statistics.

Mariam al-Dalou also resorted to mushroom cultivation in a room in her home in Gaza City a year ago after her husband was diagnosed with cancer and could no longer work.

Dalou, who supports her family of five, told Al-Monitor: “Growing mushrooms is my family’s only source of livelihood. I make 300 shekels [$75] a month in sales, with which I can cover some of my family’s needs, such as food, while certain charities provide for other needs such as my husband’s medication.”

She explained the process of growing mushrooms, in particular oyster mushrooms as that is the easiest to grow. “It's a simple process and it is not at all expensive. It only requires a number of plastic baskets with holes, hay and mushroom seeds. We put the hay in boiling water for 12 hours, then drain it and put it in the basket. We then spread the seeds over it, add another layer of hay and throw more seeds over it, and so on until the basket is full. The baskets are placed in a dark and humid room for 21 days to germinate. We then water them six times a day, and three days later the mushrooms begin to emerge and grow," she said.

She pointed out that the main obstacles women who grow mushrooms face is the lack of gas because of the Israeli blockade. Gas is one of the most important elements for the success of this type of agriculture, which requires gas to boil water for the sterilization process. Hay is soaked in boiling water for 12 hours straight.

Rana al-Masri, a university student who was able to pay off her college tuition by growing and selling mushrooms, said at first she was discouraged by the repeated failure in planting them, but in the end she succeeded and began selling mushrooms to restaurants and grocery stores.

Rana, who lives in the northern Gaza Strip, told Al-Monitor, “I learned how to grow mushrooms during a training session for women at the Ministry of Agriculture. I first began selling them to my neighbors and then expanded to restaurants and grocery stores.” She said that she began selling more when people became aware of the benefits of mushrooms as a food supplement rich in vitamins.

She added that she sells a kilogram of mushrooms for 20 shekels ($5) and produces in each agricultural cycle about 10 kilograms (22 pounds) of mushrooms.

According to the Palestinian Central Bureau of Statistics, female participation in the labor force stood at 19.4% of the total number of women of working age in 2014, compared to 10.3% in 2001.

According to Amjad Agha, director of the experiments unit in the Ministry of Agriculture in Gaza and supervisor of the cultivation of mushroom projects, the first attempts to cultivate mushrooms in the Gaza Strip took place in 2009. Mushroom growing has witnessed a great development through numerous experiments carried out by the Ministry of Agriculture. Today, Gaza produces the best types of oyster mushrooms, which are very popular in the local market.

“The cultivation of mushrooms is one of the most promising projects in Gaza, since it’s an easy, low-cost process," Agha told Al-Monitor. "Its production cycle is no more than three to four months and it does not require a large piece of land or huge agricultural machinery. It can be grown in closed and small rooms and throughout the entire year.”

He said, “Mushrooms need little water; the production of a kilogram requires around 25 liters [6.5 gallons] of water, compared to tomatoes that require more than 600 liters [158.5 gallons] of water per kilogram. This is convenient for Gaza, which suffers from a major problem when it comes to water availability.” Agha added that waste resulting from the cultivation of mushrooms can be used as an organic fertilizer for the soil or as food for animals.

Masri hopes to expand her project and go beyond limited individual production, with the help of international relief organizations and special projects that enable women to expand their businesses and achieve their ambitions to export mushrooms internationally.