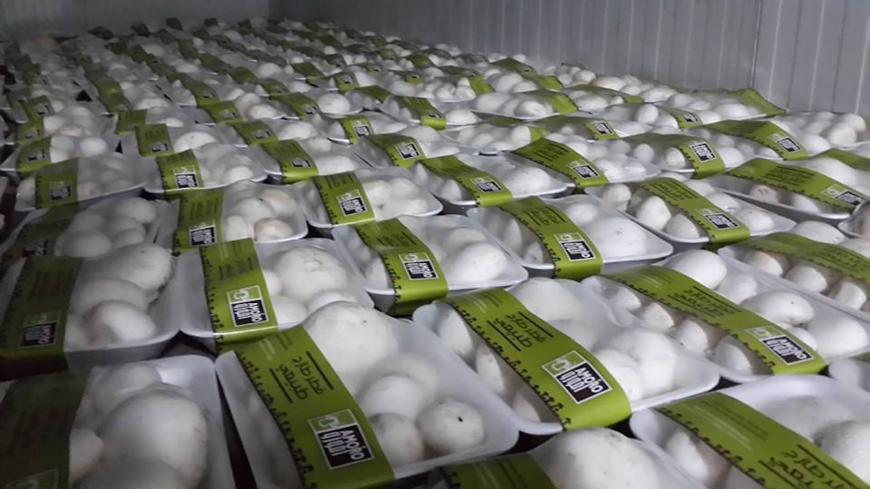 The conflict between Israel and Palestine is about land and identity, explains Palestinian Fair Trade Association manager Mohammed al-Ruzzi. The Palestinian fair trade union works toward social and economic empowerment for producers and small community cooperatives through fair trade principles.

Agriculture plays an important role in resistance to the Israeli occupation. Growing local produce gives Palestinians options in the market and a choice to buy Palestinian products over Israeli products. “It helps you connect with the land, and stay with the land,” Ruzzi told Al-Monitor.

Amoro, Palestine's first mushroom farm, was established in 2013 by Sameer Khraishi, Mahmoud Kuhail, Wadia Nassar and Tayeb Akel. It grew directly out of these ideas of resistance. CEO Mahmoud Kuhail believes it is the Palestinians' right not to have a “monopolistic product enforced on the shelves.”

Kuhail told Al-Monitor, “It’s our right to have locally grown products be displayed at point of sale, and as a customer we have the right to choose between types of products.”

This right is difficult to uphold under occupation. Since its start, Amoro has faced numerous difficulties hindering the enterprise.

To produce their closed-cap white mushrooms at their farm in Jericho, in the Jordan Valley, Amoro needed to import compost infused with mushroom spores from the Netherlands. Even though all the necessary approvals were in place, both from the Palestinian Authority and Israel, the containers of raw materials were held arbitrarily at the Ashdod port, said Kuhail.

Kuhail explained the delays progressively increased. The first container was held for 30 days, the second 42, then 60 and the last 80 days. “Israeli producers [who] import from the same supplier face no problem getting it into their farms. It takes one to two days maximum,” Kuhail said. It's a strategy used by Israel to give its own agricultural businesses a market advantage.

Maintaining consistency in quality, making sure each batch of compost produces the same product, took time to perfect. “You need a year and a half to two years for trial and error,” Kuhail said.

Amoro was only fully operating for a year and a half before it had to close in mid-2016, as all of its revenues were eaten by the import costs. For every day a container was held, Amoro had to pay 880 shekels ($250). “It’s a huge amount of money,” Kuhail said. “When we sold the mushrooms, all the money we had as revenue, we gave it back to people we borrowed money from in order to cover the port expenses.”

Amoro was often out of the market for a month at a time waiting for the compost. “We were not able to schedule our growing cycles,” Kuhail explained.

Ruzzi said that the most important thing for farmers is a sustainable market. “Unfortunately, everything is controlled by the political situation,” he added.

When in production, Amoro distributed mushrooms to most of the main cities in the West Bank. There was also demand in Gaza, though Amoro had to put this expansion on hold as production became more unpredictable.

The farmers realized they needed to stop trying to import compost until they found a solution to the delays. While the business aims to be 100% Palestinian, Kuhail explained they have now registered a company in Israel, under Israeli law, to act as its import/export arm in the West Bank. It was the first step toward reopening in March. They hope the new company will be treated equally with Israeli importers. If not, Kuhail said Amoro could more easily sue the port authorities, as the company would fall under Israeli jurisdiction.

Kuhail said the Amoro extension in Israel is run in partnership with an Arab-Israeli, a Palestinian continuing to reside in Israel. He “is legally an Israeli, but in blood and heart he’s 100% Palestinian.”

On Dec. 17, Amoro launched a crowdfunding campaign to restart production. “We consumed all our options. We got money from our families, friends, our network, and we didn’t have anyone else to borrow money from,” Kuhail said.

While the full funding goal wasn’t reached, Amoro managed to raise just over $17,000. “It’s enough for us to get our first container and [perform] maintenance at the farm to start again,” Kuhail said happily.

Kuhail is thankful so many people want to help Amoro. He thinks the customer support and demand stems from their quality product and prices that can compete with Israeli mushrooms. “We pick the mushrooms from the growing rooms, then the next morning we bring them to the market. Whereas the Israeli products have to go through two or three middlemen to get to the market over here, losing quality in transport.”

Even though the Israeli mushrooms are of lesser quality, they retain their full price in Palestinian stores. Depending on the vender, a 250-gram mushroom basket costs between 8 and 11 shekels ($2.30 and $3.10). Amoro co-founder Sameer Khraishi told Al-Monitor, “We try to compete with [Israeli] prices at wholesale level, but the vendors have their own retail prices. Even if we sell at a low price, they will still sell them for 9 shekels ($2.50).”

Khraishi added there is a growing movement to boycott Israeli products to maintain national Palestinian identity. Kuhail said it is the Palestinians’ responsibility to participate in the economic resistance to the occupation. Kuhail explained the ethic was planted in him at a young age, saying, “I don’t remember my mum ever bringing Israeli products back home.”

Palestinian Society for Consumer Protection director Salah Hanieh said Palestine was badly in need of a mushroom farm to provide the market with a local option and empower the local population. “It’s important … as a Palestinian society, we want to promote Palestinian production,” Hanieh told Al-Monitor.

Hanieh echoed the idea that the agricultural sector is an important venue of Palestinian defiance and land defense. “Any sector of agriculture embodies resistance, [through] competing with Israeli products and stopping Israeli settlement [products] from coming to the Palestinian markets,” Hanieh explained.

The Palestinian agricultural market is often flooded with “illegal competition,” Hanieh explained. His organization found there are mushrooms produced in Israeli settlements that are labeled with a Palestinian name for sale in the Palestinian market.

“This is kind of stealing our identity,” said Ruzzi. Hanieh agreed, saying the consumers have the right to know what they are buying.

Amoro’s long-term goal is to build its own compost facility and no longer rely on imports, though it would cost around $1 million, according to Kuhail.

Kuhail hopes Amoro will be up and running again at the start of March, and he is also looking forward to expanding its product line to portobello mushrooms. “It’s definitely an exciting feeling,” he concluded.