Journalists still a target in Gaza

Wars and attacks often take the lives of Gazan journalists doing their job in the field. 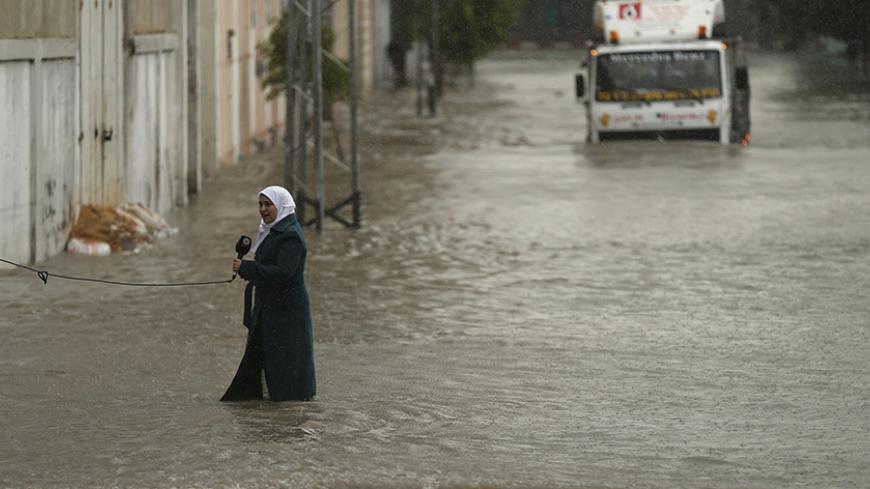 A Palestinian journalist speaks to the camera as she stands on a flooded street following heavy rain in Gaza City, Nov. 27, 2014. - REUTERS/Mohammed Salem

GAZA CITY, Gaza Strip — Israeli forces killed 15 journalists during the war on the Gaza Strip in July-August 2014. Some journalists died on the job, while others died in or near their homes during Israeli shelling.

The Fourth Geneva Convention considers the mistreatment or murder of journalists in times of war or civil uprisings a war crime. The convention provides war correspondents with protection from risks involved in conflict situations, and it states that journalists must be warned to steer clear of danger zones, and information should be provided about them in case of death, disappearance or imprisonment. When journalists participate in a conflict, carry arms or contribute directly or indirectly to aggressive operations, they are no longer considered journalists.

The Palestinian Human Rights Center (PHRC) has followed the legal cases of 11 journalists. Attorney Ahlam Mima, director of the center’s legal department, told Al-Monitor, “We have followed up on the cases of 11 journalists who were murdered during the war after their families lodged official complaints at the center.” PHRC has contacted the families of the other killed journalists, but did not follow up on their cases as their families have not submitted a formal complaint. Some people turned to other human rights organizations, such as the family of journalist Najla al-Haj, who delegated the investigation to Al Mezan Center for Human Rights.

Mima said that the cases were compiled after talking to witnesses, collecting evidence and determining the locations where the occupation forces had shelled the journalists.

The attorney noted that after 60 days, complaints can no longer be submitted. The center has two years to refer the case to the Israeli court that is closest to the Gaza Strip, which is the Bir al-Sabah court. Mima indicated that it is possible to resort to international courts, but only after having tried all legal ways in the occupied territories.

A report by Israeli TV station Channel 7 expressed skepticism vis-a-vis those journalists, claiming that they were affiliated with Palestinian resistance movements. This skepticism was further shown by occupation forces when they, based on a request by PHRC, probed into the targeting of Gaza’s Hamas-affiliated Al-Quds TV in Burj al-Shawa by occupation aircraft during the war of 2012. Israeli forces then formed an investigation committee headed by Maj. Gen. Doron Almog and heard the eyewitnesses’ testimonies in February 2014.

Tahseen al-Astal, deputy head of the Journalists Syndicate, told Al-Monitor, “There are several journalists who are not affiliated with political parties. This does not deny them their title of journalist.” He said the targeting of journalists is a war crime, as most were killed with their fellow journalists in the field in the summer of 2014.

Astal said that Israel’s definition of a journalist in war time is a failed attempt to delude the international public opinion. “We are cooperating with human rights organizations and the International Association for Journalists to collect evidence and submit it to the International Criminal Court. Work will be done as part of the activities of a committee approved by [Palestinian President] Mahmoud Abbas,” he added.

The families of these local journalists have not received any compensation from their employers, which has caused hardship for some families whose deceased loved one was the only provider. This was the case in Rami Rayan’s death.

During a meeting in his humble abode, Rayan’s father, Fathi Rayan, surrounded by his four grandchildren of whom the youngest is one year old, told Al-Monitor, “Rami was our only child. He lived with us along with his wife and children. Nobody from the institution he used to work for gave us any compensation, salary or even moral support despite him trying to please the organization with his work. That cost him his life.”

Commenting on Rayan’s case, Astal said, “Organizations where journalists who were killed worked must preserve the rights of their [staff] and cede them to the families. This is a question of ethics, and we are following up on this issue with several organizations.”

When asked why a large number of journalists died during the recent war, journalist Sami Abu Salem, who is trained in the safety of journalists, said that the main reason stems from the criminal behavior of the Israeli forces that deliberately target journalists.

Abu Salem told Al-Monitor that another reason is related to arbitrary shelling of several regions in the Gaza Strip, claiming the lives of journalists in their own homes.

In addition, Abu Salem said, “[It] is the unexpected drive of journalists that might sometimes border on recklessness. They don’t always think in terms of their safety, and thus might go to dangerous places without protecting themselves. The journalists’ drive to unveil the occupation’s crimes would then happen at the expense of their own safety.”

He added that other reasons include the lack of protective equipment for journalists, such as armored cars.

Journalists in the Gaza Strip — which witnessed three wars in less than eight years — need further training in the field of professional safety. They also need to know their rights stipulated in the international laws during times of conflict. A strong syndicate that seeks to obtain their rights from the organizations they work for is required.

Most organizations did not protect their staff or offer compensation to the families of journalists killed in the war last summer. The Gaza Strip is filled with enthusiastic journalists who seek press scoops and exclusive photographs at the expense of their own lives.