An Israeli court has rejected a lawsuit filed by a Gazan who lost family members and his home to an Israeli airstrike in 2009, Mohammed Suliman reports. 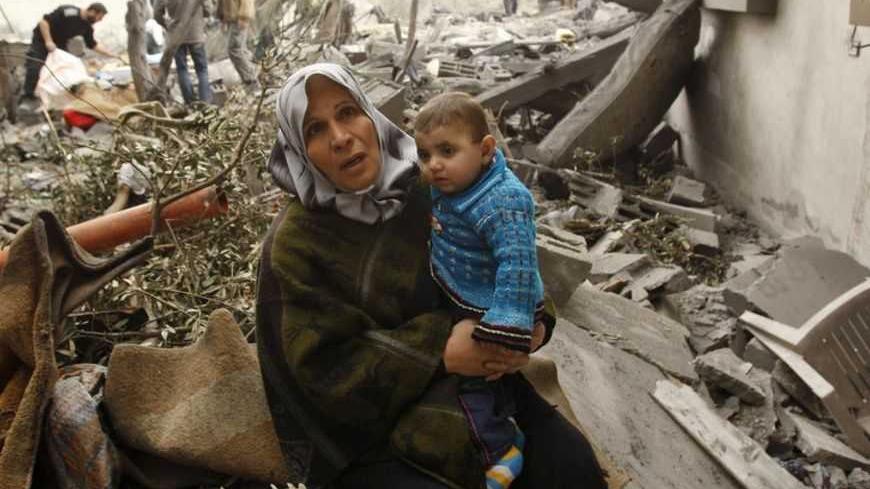 A Palestinian woman sits on the rubble of her destroyed house after an Israeli air strike in Rafah in the southern Gaza Strip, Dec. 30, 2008. - REUTERS/Ibraheem Abu Mustafa

Last month, the Israeli Central Court of Beer Sheba rejected a lawsuit filed by the Al Mezan Center for Human Rights, a Palestinian NGO, on behalf of Fayez Salha, a resident of Beit Lahiya in northern Gaza, against the shelling of his house during Israel’s 2008-09 Cast Lead operation.

According to Al Mezan, on Jan. 9, 2009, during Israel’s deadly operation in the Gaza Strip, an Israeli drone shelled the house of Fayez Salha in what is widely known as a ‘roof-knocking’ attack. This was shortly followed by another heavy airstrike by Israeli war jets which directly hit the two-story house and left it totally damaged.

Six family members — Salha’s wife, his four children, and sister-in-law — were killed as a result of the attack, out of the eight who were inside the house at the time of the airstrike.

In November 2009, Al Mezan filed a complaint with the Military Advocate General to open a criminal investigation into the incident. The lawsuit was soon terminated with no charges brought against the offenders on the grounds that the attack took place in the context of a military operation. In addition to dismissing the case, the court ordered the Salha family pay 20,000 NIS (about $5,000).

This is all “despite evidence that no time was given to the civilian inhabitants inside the house to vacate it, which clearly demonstrates disregard to civilian life by the offenders,” Al Mezan said.

In an interview with Al-Monitor, Fayez Salha, who was not at the house at the time of the incident, described what happened on the day when he lost his wife and four of his children.

At about 3:20 am that fateful night, Fayez was on duty when he received a surprising call from his wife.

“She told me that our house was hit by a drone strike, and it was partially damaged. I told her to vacate the house immediately and hung up. I was extremely anxious as I waited for her second call to confirm that the house had been vacated,” he recalled dejectedly.

At 3:30 am, 10 minutes following the first airstrike, another huge explosion hit the area.

“I [didn't] pay much attention to it because we used to hear such bombs repeatedly during war. However, I soon received a call from my neighbor who told me that my house was targeted for the second time before my family could vacate it.”

Salha, who works as a janitor at UNRWA, stated that he will not quit fighting his judicial battle against the Israeli army until he regains his rights fully and until the perpetrators are brought to justice. He explained that he is planning on asking for help from Palestinian Authority President Mahmoud Abbas to defend him in Israeli and international courts.

“The victim has the right to go to concerned authorities to achieve justice,” Salha said. “I will request help from the PA president. I will throw the ball in their field, and I hope that they take action on my behalf. I cannot represent myself. … I find it bewildering that the international community is silent toward such outrageous massacres and towards Israel’s manipulation of the law to its benefit.”

According to Al-Mezan’s investigations, three families of eight lived in the two-story house, which was 180 square meters. Following the first drone strike, residents of the house were hurriedly attempting to escape. However, while a few successfully managed to leave the house, others were still on the staircases when another Israeli airstrike directly hit the house, which resulted in the death of six residents: Salha’s wife, Randa, 33, and her children, Diyaa’ Ad-Din, 14; Baha Ad-Dine, 4; Rana, 12; Rolla, 1 year. This is in addition to Fatma Fayez El-Haw, 22, Salha’s sister in law.

Al Mezan’s lawyer, Rami Shaqoura, said that the Israeli court’s ruling reflects and demonstrates what human rights groups have said time and again over the past few years; that the Israeli judicial system institutionally deprives the Palestinians of their rights and hinders their ability to access justice mechanisms.

In July 2012, Israel introduced new amendments to Israel Civil Tort Law, particularly the Civil Damages (Liability of State) Law, such as Amendment No. 8, which deprives Palestinians from their right to be compensated for damages caused by Israeli forces when damage is done during “combat action.”

General Director of the Al Mezan Center Issam Younis highlighted to Al-Monitor the international community’s responsibility, particularly the High Contracting Parties to the Fourth Geneva Convention, towards Israel’s flagrant and systematic violations of human rights in the Gaza Strip.

“We hold the international community responsible for their silence towards Israel’s policies in the Occupied Palestinian Territories which has only emboldened Israel to impose restrictive measures on Palestinians, therefore rendering their ability to access justice mechanisms near impossible,” he stressed.

Moreover, he added that the only legal avenues that are available to the Palestinians now are represented in international legal mechanisms, including UN bodies and the International Criminal Court (ICC).

“Besides the physical obstacles imposed on Palestinians, especially extremely restricted access to courts, this law narrows the already slim opportunity for remedy available to Palestinians,” said Younis. “This new amendment constitutes an obstacle put forward in order to obstruct Palestinians’ access to justice and remedy, which is all in contravention with the most basic human rights norms. Such actions must be forcefully condemned by the United Nations, the European Union, and the whole international community; and revoked immediately,” he added.

Despite his immense grief, Salha remains determined to continue fighting for his rights and to bring to justice those who ordered the killing and executed the fatal airstrike. “For me, this is only the beginning, but I will fight until the end. This is not Fayez Salha’s case; it is the case of all Palestinian victims of Israeli aerial attacks.”