In an interview with Al-Monitor, Libyan Minister of Information and Culture Omar al-Qweri stressed that the solution in Libya is not political, but rather military, and can only be achieved by lifting the ban on arming the Libyan army. 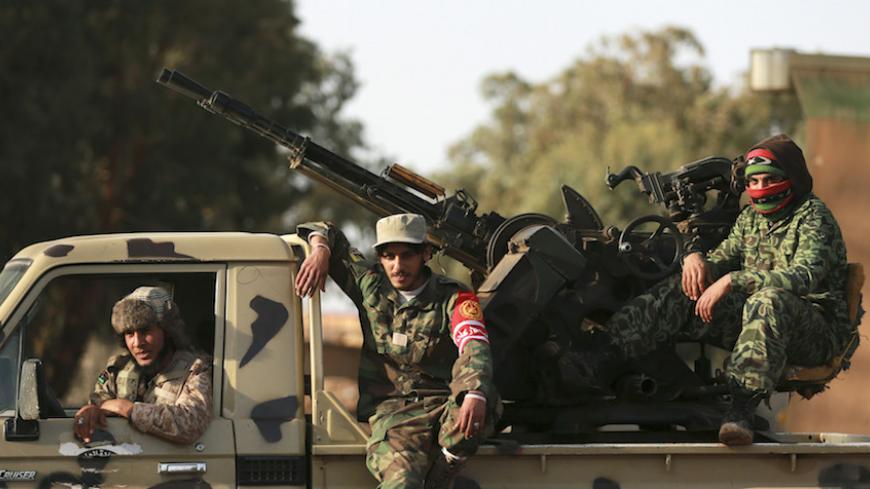 Members of the Libyan pro-government forces look on in an army camp in Benghazi, Feb. 1, 2015. - REUTERS/Esam Omran Al-Fetori

CAIRO — The internal situation has worsened in Libya, with armed militias taking control of the capital, Tripoli, and large parts of the country, while fighting has intensified between them and the Libyan army led by Gen. Khalifa Hifter. In light of this, Minister of Information and Culture Omar al-Qweri stressed that the current situation in Libya does not require a political solution — as sought by international mediation efforts — but rather needs a military solution to put an end to the security crisis.

In an interview with Al-Monitor during his visit to Cairo on March 15, Qweri said, “There is no effective international force when it comes to the Libyan issue.” He accused European states of playing a negative role in the crisis in his country, saying, “We do not understand why London has become a capital supplying us with terrorism.” He added, “European states have been negligent regarding the situation in Libya, despite the fact that they are faced with terrorism and boats of terrorists will soon arrive to their shores.”

During the interview, Qweri confirmed that the current legitimate political administration in Libya only wants for “the ban to be lifted from the Libyan army and for it to be supplied with weapons. Thank God this is what everyone wants.”

Al-Monitor:  The political solution that has now been proposed requires the government and the elected parliament to make concessions to include the fighting groups in Tripoli in a new national consensus government. To what extent do you accept this solution?

Qweri:  The problem in Libya is not political; rather it is a security problem. As long as the militias continue to raise arms against the state — with the presence of political parties that want to use and exploit these militias to gain seats and posts — we cannot envision the success of a political solution. We must disarm the militias and fight against terrorism first.

We reject this [consensus] government and cannot accept a government that is imposed and appointed by the international community. The government should be selected and agreed upon by the Libyan people, who have announced their rejection of any government that brings those [operating] outside the law to power.

Al-Monitor:  On the military side, do you expect that the clashes led by the Libyan army will witness military advances after Gen. Hifter was appointed army commander?

Qweri:  Of course, because [Hifter] now has legitimacy and legal capacity. He can now meet with officials abroad, deal directly with countries, and gather around him men from the armed forces and the army. [His legitimacy] had nearly disappeared previously with the collapse of the army. I think that he is able to reunite the army, because he is a leading figure and has the respect of everyone within the ranks of the army.

In terms of military operations on the ground, there are large battles being fought by the Libyan army in the west, after the battle in the east ended. We believe that if the focus is applied to the battle in the east, regaining control of Tripoli will only take weeks, after the Benghazi battle was settled in favor of the army. The army now has a choice: It can either take a step back and complete [the battle] in Derna, or take a step forward and go to Tripoli. At this point the army’s policy is not clear, but I think that it is important to liberate the capital, Tripoli, and surround Derna, then return to the latter after the capital has been liberated.

Al-Monitor:  Where do the effective states of the international community stand concerning the Libyan crisis?

Qweri:  There is no effective international force when it comes to the Libyan issue … there is a lot of talk about Libya but little action. All states are talking, but this remains just words and is not commensurate with the size of the battle and crisis in Libya. In the case of Italy, for instance, it has many interests in Libya, yet it has not offered anything. European states have been negligent regarding the situation in Libya, despite the fact that they are faced with terrorism and boats of terrorists will soon arrive to their shores.

Al-Monitor:  How do you view the delay in a decision by the international community and the UN Security Council to agree to lift the ban on providing weapons to the Libyan army?

Qweri:  The international community will not contribute to solving the crisis in Libya, and the big powers have interests in a worsening of the situation. We are not awaiting a solution from them — the solution has always been in the hands of the Libyan people. We believe that there is a plan to divide Libya into three states, and this is in the interest of the United Kingdom and the United States. This is apparent since they have obstructed the Security Council decision to lift the ban on providing weapons to the army.

Al-Monitor:  Do you expect Russia to supply you with weapons, in light of the ongoing decision to ban arming the army? What is the extent of cooperation and understanding between you and Russia?

Qweri:  Russia’s position recently has been better than it previously was. Moscow is intent on developing relations with Libya and we welcome and support this. The Libyan prime minister may soon visit Russia.

Russia is a major country and if it believes it has an interest anywhere in the world it is capable of taking the appropriate decision. However, Libya still faces a ban on providing [the army] with weapons, and any country that thinks about arming us could face a problem and international sanctions. At the same time, weapons are being openly supplied to militias and airplanes carrying weapons from Turkey and Sudan, with Qatari funding.

Al-Monitor:  Why do you strongly attack the UK and some European states, accusing them of obstructing any solution to the Libyan crisis?

Qweri:  That question should be addressed to the UK. We do not understand why London has become a capital supplying us with terrorism. We reject this negative role and the UK should be cautious. The British ambassador deals with and talks about Libya as though it is a company he owns. We announce that we are harmed by the terrorism coming from the UK. Now we are working according to the policy of “that which is better,” but with some countries we are thinking about treating them the same [way they treat us]. All options are available to us and it will be a surprise.

Al-Monitor:  What is the nature, size and limits of the role of neighboring states in the Libyan crisis?

After the establishment of the Libya neighbors mechanism according to the Egyptian initiative to solve the Libyan crisis, the meetings did not produce clear results. We only want for the ban to be lifted from the Libyan army and for it to be supplied with weapons. Thank God this is what everyone wants, and it is our only demand.

Al-Monitor:  How do you assess the Geneva dialogue headed by UN envoy Bernardino Leon? Do you expect it to produce a real result in the context of ways to solve the crisis?

Qweri:  We do not expect any good to come of the dialogue. It involves just talks that resemble soirees and tea sessions. One cannot imagine a solution to the crisis in Libya [formulated] on these shores of Lake Geneva. The solution lies in the heart of Libya, it involves the real parties and Libyan tribes sitting down for a dialogue. Those who Leon is meeting with are not representatives of the Libyan people. He is meeting with former members of the former [parliament], or militia leaders.

The UN, through its delegates, views Libya through Western eyes. It is unable to see and read the Libyan reality that exists now. We are facing a real threat, while they sit and talk about a dialogue or a consensus government. The international community is capable of sending a strong message to terrorists, extremists, those operating outside the law and the Tripoli government, through issuing travel bans and arrest warrants via Interpol for extremists until they embrace moderation. But the international community does not want this.

Al-Monitor:  What are the scenarios for the future of the Libyan crisis? What solutions are most compatible with the Libyan reality and the quick changes occurring.

Qweri:  The most important scenario is to support the Libyan army, and there is currently no other solution. There will be no state without the presence of an army.

Al-Monitor:  You still accuse Qatar, Turkey and Sudan of providing direct and clear support to armed groups fighting the Libyan National Army. How will you deal with this issue?

Qweri:  Qatar's policy is deceptive. It makes good statements, then carries out policies that cannot be understood. The Libyan foreign minister visited Qatar and held interviews, but to no avail. Qatar is engaged in a major project and has spent billions of dollars, and it will not go back. But we will force them to go back against their will. Our message is clear that our relationship with Doha is bad. As for Turkey, steps are being taken to cancel all agreements with Ankara.

Despite the stated positions of Sudanese President Omar al-Bashir that he supports the legitimate [government] and the Libyan people, there are agencies and parties in Sudan that still support militias affiliated with the Dawn of Libya forces. We have information, including names and details, of military squadrons charged with repairing Sudanese planes that are entering Libya and sending ammunition shipments. There are files being prepared by the Ministry of Justice to be submitted to the Arab League in this regard.

Al-Monitor:  Egypt has made large diplomatic and political efforts since the beginning of the Libyan crisis. What implications have these had on the crisis? And what is the extent of the security, political and military coordination with the Egyptian side?

Qweri:  We suffer from a common problem in Egypt and Libya: confronting the terrorist Muslim Brotherhood organization. The confrontation will be joint, and there is coordination between the security and intelligence services and the army. We are working on all fronts with Egypt.