Although Lebanon is considered a pioneer country in terms of female empowerment, women are still timidly represented in politics, as these usually access parliament following the death of their relatives. 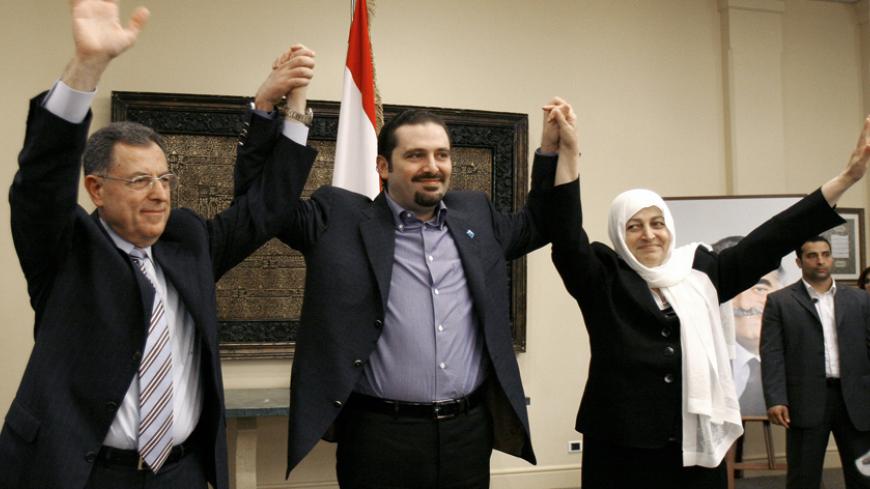 Only a small number of women have made it into Lebanese politics, and often after the death of a relative. Illustrating this point is the popular saying that Lebanese women enter parliament wearing black. In spite of its relative openness, Lebanese society is still dominated by a patriarchal culture, which makes the path to government positions and parliament a daunting challenge for most women.

Only four women belong to the current Lebanese parliament, comprised of 128 members: Sethrida Geagea, who is the member of parliament for the Bcharre region; Gilberte Zwein, who has earned her place by running in Keserwan on the ticket of Gen. Michel Aoun, who heads the Change and Reform bloc; Bahia Hariri, who is a Saida member of parliament and member of the Sunni Future Movement; and Nayla Tueni, who won the Greek Orthodox seat in Beirut.

According to the media, only 12 out of the 587 parliamentary candidates were women in 2009. According to journalist Emile Khouri, the current government includes one woman, Judge Alice Chaptini, while four other women held such positions, namely Rayya al-Hassan as finance minister in 2009, Bahia Hariri as minister of education in 2009, Nayla Moawad as minister of social affairs in 2005 and Leila al-Solh as industry minister in 2004.

After being among the leaders of women empowerment in the Middle East when Lebanese suffrage was extended to women in 1952, Lebanon has fallen back on progress in terms of women rights. With only 3.1% of its parliamentary seats currently occupied by women, Lebanon has the same proportion as the Islamic Republic of Iran, and lags behind Kuwait (6.2%) and Jordan (12%).

“Lebanese women play a very minor role in Lebanese politics, which is a reflection of the highly patriarchal society,” Paul Tabar, a sociologist at the Lebanese American University, told Al-Monitor.

For many of these women who play a political role, they were only appointed or included in major electoral lists after the loss of a relative in politics.

For instance, Nayla Moawad was the wife of Lebanese President Rene Moawad, who was killed in a bomb blast in 1989. She became a member of parliament in 1991 before becoming minister.

Bahia Hariri was a possible candidate for prime minister following the 2005 assassination of her brother, former Prime Minister Rafik Hariri. Member of parliament Nayla Tueni is the daughter of slain member of parliament Gebran Tueni, killed in a bomb blast in 2005.

Sethrida Geagea found herself thrust into politics when her husband, Samir Geagea, a Christian leader and head of the Lebanese Forces party, was imprisoned for 11 years during the Syrian occupation of Lebanon.

“Women often step into a seat vacated by a relative who is assassinated. They thus ensure the transition, until another member of the family can come of age to join political life,” Tabar explained. The sociologist believes that in Lebanon, the closest people to “a political martyr” are often vetted to ensure the continuity of a family as well as a collectivity, i.e., a region or a community.

The small role played by women in Lebanese politics is also reflected at the level of parties. Last year, a nationwide study was released by the Lebanese Women Democratic Gathering titled “Organizational needs to promote women’s participation in political parties and trade unions in Lebanon.”

The study, which chose six out of 12 active political parties in Lebanon, showed that only one or two women were represented in each party’s leadership body. None of the parties that were studied adopted a quota for women in their internal organization: 33% absolutely rejected a women’s quota, 50% appointed women in some leadership positions and 16.6% nominated women for parliamentary elections.

Conversely, the study showed that at the level of trade unions, the ratio of women’s enrollment compared with men’s in six out of eight unions was 40% and more, all the way up to 75%.

“We are noticing a great female progress at the level of public institutions and ministries,” journalist Emile Khouri told Al-Monitor. “Women are efficient and often less corrupt than men,” he added.

Former member of parliament Moawad believes that the sectarian political system has its own set of quotas within communities and hinders women’s overall political participation. “The quota system that already prevails in the Lebanese parliament and that has been inherited from the Syrian hegemony over Lebanon, complicates women's role in politics,” Moawad told Al-Monitor.

Imposing a quota system for women could facilitate women’s access to political life. By comparison, Jordan provided 12% of parliamentary seats to women, thus 18 out of 150 seats. “The female quota should be one of the main battles fought by women,” Tabar said.

In addition to the quota system, another problem resides in Lebanon’s personal law system, including marriage, inheritance and divorce, which is ruled by 10 different religious codes applied to 17 religious sects.

Lebanese personal laws stifle the freedom of citizens and create inequality between men and women when it comes to marriage, divorce and inheritance, among many other issues, as each community is ruled by its own set of laws. “Equality, when it comes to civil law and education, is a stepping-stone for Lebanese women,” Moawad noted.

Civil laws would also liberate youths from sectarianism in a country divided along religious lines, and thus facilitate women’s access to power.

However, Moawad underlines that Lebanese women ought to mobilize and exert pressure to play a more prominent role in their country’s decision-making process.

“Women's associations are not active enough and do not work together,” she pointed out. Moawad advises that introducing and properly training women at the level of political parties would help women to prepare for political life.

“Lobbying,” she said, “is also essential for the empowerment of women in Lebanon.”