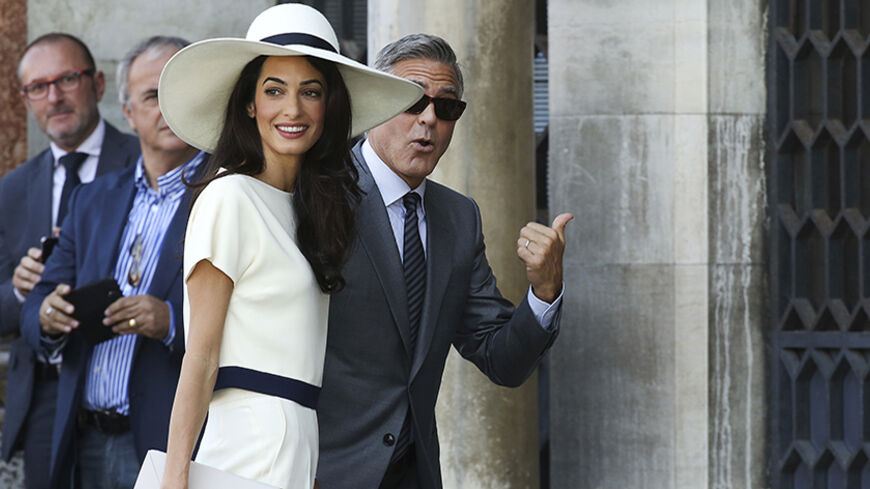 US actor George Clooney and his wife Amal Alamuddin arrive at Venice city hall for a civil ceremony to formalize their wedding in Venice, Sept. 29, 2014. - REUTERS/Alessandro Bianchi

The actor George Clooney’s marriage to British-Lebanese lawyer Amal Alamuddin is not the first time the world has been preoccupied with a Lebanese woman. A few days ago, the entire Islamic world, especially Afghanistan, was buzzing with news of another such woman: Roula Saade, wife of the new Afghani president, Ashraf Ghani. A Lebanese Christian is now the first lady of Afghanistan, a predominantly Muslim country with a population of 32 million.

The local and international media are intrigued by Saade's past. It turns out that Ghani had met her at the American University of Beirut, where she had began studying anthropology in 1969. Fouad Saade, Roula’s brother and a prominent Marxist, was tutoring the Afghani student who would later succeed Hamid Karzai as president. That is the short version of how Roula Saade became the first lady of Shash Darak Palace in Kabul, a Greek Orthodox woman from Koura, north of Lebanon, and mother of two: Mariam (whose name is common among Christians and Muslims) and Tareq.

Some two years ago, the media was fascinated with Aline Skaff, the wife of Hannibal Gadhafi, son of Moammar Gadhafi, who ruled Libya from 1969 until his overthrow and death in 2011. Skaff as well is a Greek Orthodox Christian from Lebanon. She was born in the village of Munjez in Akkar, on the northern border with Syria. She had worked as a model and was known for posting revealing photos on the web before she became famous for marrying Hannibal. She ignited the Lebanese world with the news of her moving back to Lebanon after the toppling of her father-in-law’s regime.

Social media is now abuzz with the likes of Daniella Semaan, who left her millionaire Lebanese husband and began dating Cesc Fabregas, the Spanish professional soccer player. Her social status would not be enough for the media to be constantly interested in her if it weren't for her nonstop posting of pictures and news about her previous and current personal life.

A few years back, no one seemed to notice that a Lebanese woman was involved in the fall of the man who was once the most powerful general in the United States. The scandal in November 2012 that led to the dismissal of Gen. David Petraeus as director of the Central Intelligence Agency stemmed from his extramarital girlfriend’s suspicion about emails between him and a woman named Jill Kelley — a Lebanese woman who was born Gilberte Khawam. Her father, Hanna Khawam, and his wife, Marcelle, fled to Philadelphia in the late 1970s during the civil war.

This is but a sampling of the dozens of female “celebrities” with Lebanese origins. Among the other successful and famous women around the world of Lebanese heritage are Shakira, the Colombian singer; the heiress to the Swiss Swatch Group empire, Nayla Hayek; and Amale Andraos, the first woman to become dean of the Department of Graduate School of Architecture, Planning and Preservation at Columbia University.

The attention matter might seem ordinary for a small country like Lebanon, but what is not normal is for Lebanon to be the origin of all these women while being a country where women suffer from staggering legal and social discrimination. It is a place where women are victims of domestic abuse, sexual assault and sometimes murder without the ability to hold perpetrators accountable for legal, discriminatory reasons. The paradox is having so many successful women of Lebanese heritage outside Lebanon, while the Lebanese political system remains dominated by men and completely out of reach for women.

Most Lebanese governments did not include female ministers until October 2004. The current parliament only has four female deputies out of 128 members. It is noteworthy that these four women were elected thanks to male members of their families, not on their own accord. Two of them, Gilberte Zwein and Nayla Tueni Maktabi, inherited their posts from their fathers. Bahia Hariri took a seat thanks to her brother, the late Prime Minister Rafik Hariri. Sethrida Geagea became a deputy thanks to being the wife of Samir Geagea, former head of a militia.

How should one interpret this paradox of Lebanese women’s success abroad versus their marginalization in Lebanon? It seems that Lebanese society provides women the basic elements for success, through education and development of personal capabilities, but the same society and political system hinder them with their laws, traditions and social and religious barriers. This is why women emigrate and find success elsewhere. They escape the oppression of their country and counter the intensity of the injustice they suffered by striving to become successful.

It is a contradiction worthy of the attention of Lebanese lawmakers, officials and leaders, who should address this situation. Until then, Lebanese women will only be able to view pictures of weddings in Venice and cheer on their fellow Lebanese woman — “Congratulations Amal!” — in this case while recognizing that “Amal” in Arabic means hope, which is all they might have for the future.