Will Nadine Moussa be Lebanon's next president?

Lawyer and activist Nadine Moussa, the first woman in Lebanon to submit her candidacy for the presidential elections, tells Al-Monitor that women are still struggling to break the political traditions of a patriarchal country. 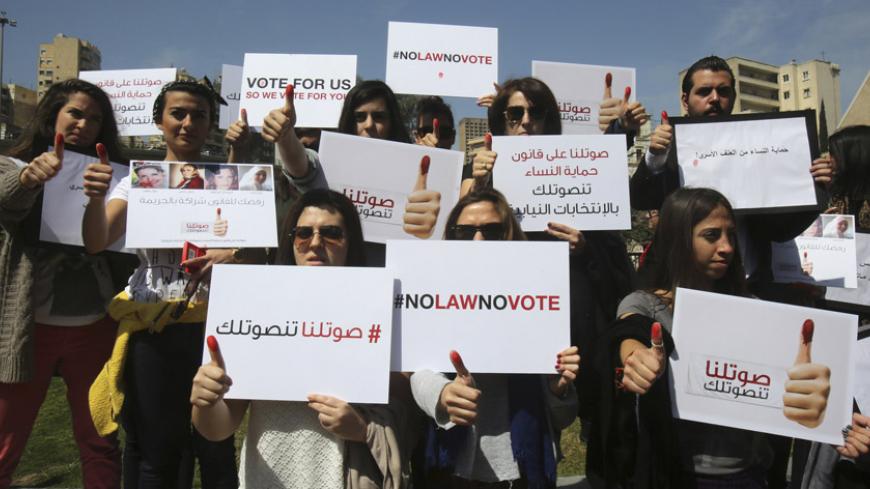 Activists hold up their red-inked thumbs and carry banners as they pose for the media during a sit-in near the parliament and in front of the UN headquarters in Beirut, April 1, 2014. - REUTERS/Sharif Karim

After studying in Paris and Beirut, lawyer Nadine Moussa traveled a lot with her diplomat husband. She managed to continue working and stayed connected to Lebanon, where she returned in 2001 for four years, and then in 2006 to stay permanently. She established herself there as a lawyer and an activist. Today, she is the first woman to have presented her candidacy for the Lebanese presidential elections in 2014.

The 2014 presidential elections led nowhere, to no one's surprise. The only thing new was the presence, for the first time, of an independent woman's candidacy. She told Al-Monitor, “I was involved in defending women' causes, human rights and the youth and to fight corruption.”

She presented her candidacy to the 2013 parliamentary elections for the Metn district, with the support of the association “Take Back Parliament.” She was automatically elected among 48 other independent candidates and around 10 women, in an uncontested and controversial race. “I then wanted to confirm my political commitment by presenting myself for the 2014 presidential elections,” she said. “It was the logical continuation of my journey. I wish to fight against this feudal, obsolete and sectarian system that wouldn't allow … a state of law. We live in a system where the citizens don't get their essential rights.”

She wanted to “challenge the tribal and patriarchal rules of the Lebanese political system and show the public that it's possible for women outside of the traditional political world to take part in it.” Moussa is supported by the collective “Women in Front,” which raises awareness and pushes women to take concrete actions for their public representation, in addition to the Lebanese Women Democratic Gathering and other feminist and civil society organizations, such as Take Back Parliament.

Her program invites people to move to the "Third Republic," because “the second one is obsolete; it never solved our problems at their roots. This would allow us to do that — we need to change the social contract between all Lebanese people,” she noted. The lawyer wished for “syndicalist, economic forces, workers, youth, academics and citizens from the diaspora [to] decide how they want to live and think about the foundations of Lebanese society, since historically, we were never in charge of building our nationality and citizenship.” Lebanon was ruled by the Ottoman Empire from 1516 until the end of World War I in 1918, and then by the French through the mandate that lasted until its independence in 1943. Since then, through wars and struggles over some regions, the country had to deal with foreign interference as well as a lack of political representation.

Moussa's involvement in politics has prompted several reactions. She said, “Society, especially young women, welcomed my initiative. But politicians were quite shocked that a woman was challenging their authority, though they were obliged to start considering women and organizations fighting for their representation.”

For her, “Women are marginalized and ignored in the political sphere.” No candidate replied to her letters or her program, and she was not even given a chance to appear next to them in the polls prior to the elections. “For instance, a Wikipedia page was created for the elections. My team added my missing name to the list, but the next day it was taken off. We did that more than 10 times before it stayed,” she said.

“Even in the media, no talk-show presenter invited me, which shows how corrupt our information system is.” She hopes to be financially supported to maintain her political presence, because she personally paid for her entire campaign. “I also wish that real elections will happen.”

Meanwhile, she started writing a manifesto-like booklet composed of her Facebook posts about possible political measures, which she wants to distribute for free. She will also lead public debates on the Maryam network, and the first topic will be the possibility of secularism in a religiously diverse country. Her other initiative is the foundation of a new secular — but open to all — political party, the Citizenship Movement.

Moussa expressed confidence in Lebanon's future, saying, “I think the Lebanese people have the capacities and the potential to build a tolerant, free country, where political coexistence and progress would be possible. They have to want to determine their future for themselves, so they can obtain what they dream of and what they deserve.”

Although this is the first time that a Lebanese woman has tried for the presidential seat, 530 women were elected to municipal positions in 2010. Vincent Geisser, a researcher with the French Institute of the Near East, explained, “There, women are almost absent from political bodies, but this situation is starting to change at the local level. The Lebanese political sphere is based on authoritarianism with several heads.”

He added, “It's a clan system in which dominates a civilized militia culture, a war culture. Therefore, men are the representatives of this patriarchal system, with chiefs and territories.”

For Geisser, there are four different levels of female representation in Lebanese politics. “You have the heirs, widows, sisters or daughters of a political leader who was assassinated or passed away, such as Nayla Moawad [the widow of former President Rene Moawad served in parliament from 1991 to 2009, when she gave up her seat to her son Michel], who was put in the parliament to represent the family. There are also women designated by the leader of a group, like Walid Jumblatt did for Nouha Ghosseini, mayor of Baakline in the Chouf region. They are beneficiaries of this patriarchal system; the chief, a man, still decides for them. A large number of female political activists are not very present in the political system, and don't necessarily act about women's rights, but are financed by international NGOs and democratic groups, such as the National Democratic Institute in the US. Lastly, there are radical feminist activists who fight against the system and therefore refuse any political participation.”

Geisser concluded, “Even if women fight for a bigger political representation, the idea of a political woman remains an abnormality, and they will have to fight against traditions to change mentalities.”