After Lebanon’s long-awaited electoral law was ratified, civil society movements and members are getting ready to join the elections that are scheduled to be held May 2018. 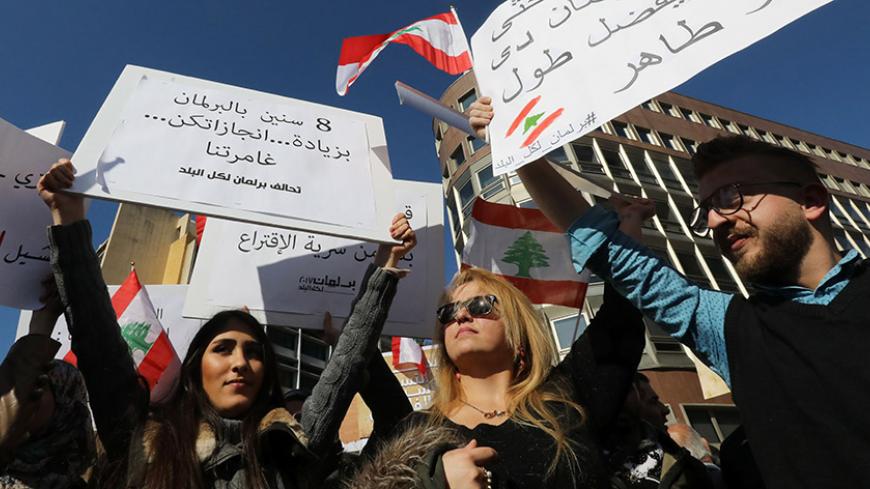 Lebanese activists and protesters hold placards during a demonstration calling for the adoption of a proportional election law in Beirut, Lebanon, Jan. 22, 2017. - ANWAR AMRO/AFP/Getty Images 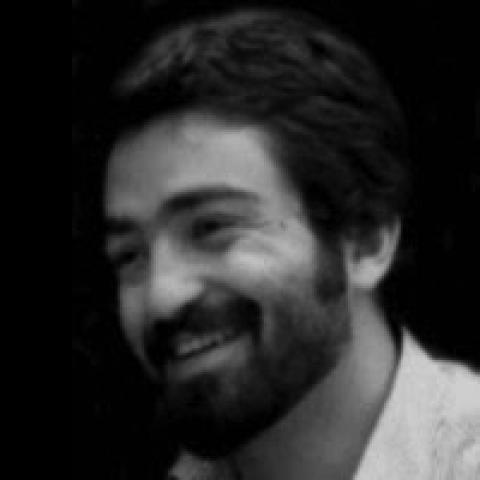 Lebanon's parliament approaved a new electoral law June 16, and several political activists and “alternative” parties are already preparing themselves for the next elections, expected in May 2018.

Lebanon's civil society has actively called over the last few months for a law based on proportional representation, as well as a series of reforms that are considered to be necessary for the transparency of the electoral process. With the new law in place and with the parliament's term expiring June 20, Lebanese civil society is now preparing itself for the second phase of its battle: participation in the upcoming elections, expected in 11 months, after the current parliament extended its term for the third consecutive time since 2013.

"This is definitely a positive step, yet insufficient," said Zeina el-Helou, the secretary-general of the Lebanese Association for Democratic Elections. "The parties in power have minimized the effect of the proportional representation and sustained confessionalism through the number and division of districts. This is not to mention that several essential reforms, such as the female quota, lowering the voting age from 21 to 18 or the creation of an independent authority, were not included in the law."

She continued: “In addition, the electoral expenditures have been effectively increased; in fact, to the individual $100,000 allowed disbursements — that are yet to be capped now, while there was no explicit ceiling before — another $100,000 was added, that can be disbursed by the electoral list on each candidate. A third reform is the rise of the permitted variable expenditure per voter to 5,000 Lebanese pounds, [compared to] 4,000 Lebanese pounds in 2009.” Concretely, this translated into more than $500,000 of legal expenditures in a district of 100,000 voters.

Despite these failures and the postponement of elections until May 2018, the battle to break through the next parliament is already underway.

Nadine Moussa is an active member of Lebanese civil society who will participate in the elections as an “independent candidate,” she told Al-Monitor. "My decision is in line with my personal struggle for years in favor of a state of law, but it is also motivated by a deep conviction that the Lebanese are more than ever thirsty for a serious and solid alternative to the current feudal, confessional and corrupt system of governance that has been in place for decades," she added. "I also decided to run in the elections in order to contribute to a feminine dynamic against the traditional ‘men’s club.’”

In 2013, Moussa, a lawyer and mother of two children, submitted her candidacy with other members of the Take Back Parliament movement, before the Lebanese Assembly decided not to hold any elections and to extend its term.

Other activists within civil society are also potential candidates. Artist Nada Sehnaoui had already run in the 1998 municipal elections before appearing again in 2016 as a candidate on the Beirut Madinati list, which included 12 women and 12 men from different professional backgrounds. The list was pitted against another that was supported by all the political parties in power.

Against the odds, Beirut Madinati gathered nearly 40% of the votes — a “civil” phenomenon observed for the first time in a country that has always been dominated by traditional confessional parties. Beirut Madinati has quickly become a label of alternative governance and progressivism among the Lebanese. If the coalition officially decides not to participate in the legislative ballot, some of its members will run individually or within a group of Beirut Madinati.

"I have not yet made my final decision, but this is secondary. My candidate is the political program that will be adopted by a united civil society,” Sehnaoui told Al-Monitor.

Since July 2016, an informal team of activists that Nada Sehnaoui joined has been working on this front. "The idea is to create the nucleus of a broad coalition that would include all individuals, movements and parties wishing to run in the elections on the basis of a program that would encompass all the dimensions of public life, including economic, social and environmental policies and reforms," she said.

While some activists are still hesitant, emerging parties, such as Sabaa (Arabic for seven), have already started their battle and are forging their electoral lists in several parts of the country. "Sabaa has now more than 2,000 members, a large network of contacts and key members with substantial experience in policymaking," Ziad Hayek, the director of the party's board, told Al-Monitor.

Hayek has been the secretary-general of the High Council for Privatization since 2006, a highly ranked public position he maintained despite his decision to rally and actively contribute to the Social Movement in 2015, amid an unprecedented waste crisis in the country.

"I don’t intend to run in the elections, but I fully support the current driving energy among some groups. … I have been living an internal dilemma, not to say a revolt, for several years now because no public policy issue has ever been taken seriously since I joined office," he said.

While the proliferation of new movements and parties is, no doubt, the proof of an anti-establishment pulse gaining ground year after year since the waste crisis in the summer of 2015, this buoyant socio-political phenomenon in Lebanon may nevertheless play against civil society during the next elections through the risk of dispersion.

Lebanon's civil society lacked momentum after the garbage crisis, partly because of the absence of a unique structure bringing together all the groups under one banner.

"That’s why a common platform gathering all progressive forces is more than necessary. This is a condition if we really want to break through. We must be united and inclusive but tightly hermetical to opportunists and hidden faces of the establishment [who use the label of] civil society,” said Wadih el-Asmar, one of the founders of the You Stink movement.

"We are actively working to make this platform emerge," he added.

Many activists share Asmar’s point of view. "If the civil society doesn’t unite, we won’t get anywhere. We saw what happened with the Syrian opposition, despite the nobility and the legitimacy of its cause, or with the Palestinians. … The road to reach this objective is definitely not easy, especially since beyond the principle of uniting everyone, the real challenge on the ground will be to create a proper governance structure for this coalition, a common brand, secure financing through one single fund and having electoral delegates,” said Asmar.

But this last battle is worth it, insisted Moussa, especially since "the chances of success are big if we manage to impose ourselves as one united alternative” for voters. She referred to a secret poll conducted by Lebanon Statistics for the National Democratic Institute that was only disclosed to political parties and civil society groups. She said, “47% of the Lebanese say they will not vote for any of the political parties in power” after years of recurrent political vacuums and paralysis, economic recession, increasing corruption and, most importantly, two illegal extensions of parliament’s term.