In the parliamentary elections due in May, dozens of youth and women are hoping to break the cycle of political nepotism and bring new faces to the country’s parliament. 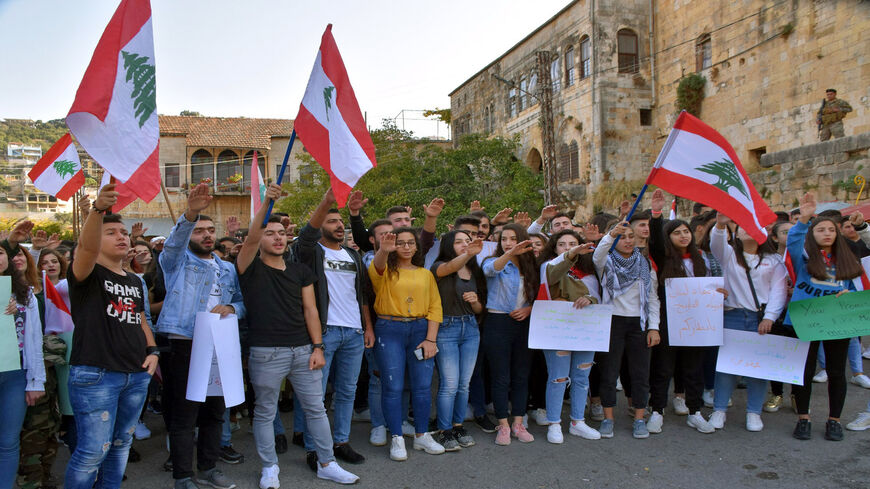 Lebanese students wave the national flag during an anti-government demonstration in the southern village of Hasbaya, Lebanon, Nov. 8, 2019. - Ali Dia/AFP via Getty Images

BEIRUT — The deadline for candidates to file their candidacies in the May 15 parliamentary elections closed at midnight on March 15, with 1,043 candidates registered, including 155 women. What is most striking is the number of young candidates and independents who are running in the elections.

“Eighty-eight people aged between 25 and 35 [registered their candidacies]," said Mohamad Shamseddine, a researcher at Information International, a Beirut-based independent research and consultancy firm.

He told Al-Monitor that this number is higher than previous in elections, and these candidates are running in different parts of Lebanon.

Mosbah Saket, 26, who is running for the Muslim Sunni seat in the northern city of Tripoli and the youngest candidate there, told Al-Monitor, “I decided to run [in the elections] because the current economic crisis has destroyed our future as young people, and we have to do something about it. A lot of people told me that if those who are older than you could not do anything, how do you expect yourself to make a difference? Despite that, I am confident that people want change, and will vote for us.”

Saket, a biomedical engineer, said, “My electoral program is realistic, and does not include unachievable promises. It consists of four basic points: reforming the educational sector because education is our future; approving a comprehensive health law, which will prevent politicians from controlling the people through health care; putting a stop to the financial meltdown by submitting draft laws; and reforming the judiciary, an issue that includes the probe into the Beirut port blast.”

The Lebanese legislative elections are scheduled to be held on May 6-8 for the Lebanese living abroad, and on May 15 inside Lebanon. This is the first ballot after the Oct. 17, 2019, uprising, when mass demonstrations swept across the country in protest against the deteriorating living and economic conditions.

Lebanon is currently facing the worst economic crisis in its modern history, amid the currency’s devaluation, inflation, and fuel and medicine shortages.

An increasing number of young people are willing to bring about change and reforms in the country, including Saket and other youths who are running in the elections in the various electoral districts.

Rayan Hajo, 28, is running in the South II electoral district. He told Al-Monitor, “We as Lebanese are suffering greatly. I am running in the face of the oppression we are experiencing because the worn-out regime and the six ruling parties in the country cannot make any change.”

Hajo, who works in the medical-cosmetic sector and is currently pursuing his doctoral degree in France, noted, “Two and a half years ago, I joined Citizens in a State, a political movement whose project is ready and does not have a sectarian rhetoric. Its language resembles me. What distinguishes our movement is that we have 65 candidates running in all districts.”

He added, “Our project is a national, not a regional project. We strive to build a civil state, hold bank owners accountable and achieve comprehensive health coverage and a good educational sector.”

Racha Itani, a 35-year-old architect and candidate for the Sunni seat in Beirut, told Al-Monitor, “I have 12 years of experience in public affairs. I filed to run in the elections because I have a vision for the city I love.”

She said, “I have an integrated project that frees us from any political influence. We want the decision to be purely Beiruti. Let's say it frankly, the Beirutis are suffering from injustice and many of the city’s residents are now living outside Beirut.”

Itani added, “My electoral platform has several items. The first is related to the city’s security. In other words, Beirut should be free of weapons. The second is economic and is based on creating job opportunities for Beirut’s residents. The third is social and is based on the recovery of stolen money and reducing the city’s pollution.”

Saket said, “We are in negotiations with the independents whose aspirations are the same as ours, with the aim to possibly form joint lists for the elections. These lists would have the same electoral program. My goal is to bring about change through my membership in parliament. If I fail, I will ask someone from outside the system to adopt the program.”

Hajo also does not see any problem with withdrawing in favor of any opposition movement that adopts his project. “Winning a parliament seat is not a goal in itself. Rather, I want my project to be implemented. But can anyone do it? We are currently working on uniting the opposition’s ranks in order to bring about change.”

Itani noted, “I will continue to work very hard after running in the elections. My main goal is to be on a list that resembles our people in Beirut and I have gone a long way. According to our stats, I have a very good chance of winning the elections, and nothing is impossible.”

There are 3,967,507 Lebanese voters this year, amid local and international fears that the elections will be postponed or torpedoed.

Every four years, the Lebanese elect 128 members of parliament, divided equally between Muslims and Christians. Candidates in the elections have the right to withdraw their candidacy decision. This year’s deadline to form electoral lists is April 4.

The elections this year are marred with the absence of the Future Movement, after its head, Saad Hariri, announced in January that he is withdrawing from politics and will not take part in the elections. The withdrawal of the Future Movement, the country’s largest and most prominent Sunni movement, will inevitably affect the electoral alliances and will leave a vacuum that no one can fill in the Sunni arena.

All eyes are on the groups and candidates emanating from the uprising in 2019, such as Khat Ahmar (Red Line), Li Haki (My Right) and the People's Anti-Corruption Observatory, as well as prominent figures including former Bar Association head Melhem Khalaf; lawyers Ali Abbas, Wassef Haraka and Ayman Raad; and activist Yahya Mawlood.

These candidates have good chances of winning the elections in some districts if they unify their ranks, particularly since the traditional parties’ popularity has declined since the Oct. 17, 2019, protests. It is noteworthy that the majority of these parties nominated the same parliamentarians who won in 2018 to be reelected this year.

Riad Issa, political and social activist, told Al-Monitor, “The political authorities have always sought to exclude young people from public affairs, and the evidence is that they are not allowed to vote at the age of 18 [voting age in Lebanon is 21]. This is clear discrimination against the youths, although they are the most enthusiastic and the first drive of the revolution. It is noteworthy that it is also difficult for young people to be appointed to leadership positions in the traditional parties.”

He said, “Today, the Lebanese youth have taken upon themselves to press for accountability. They are leading the movements and boosting their political, social and economic awareness. The Oct. 17 revolution had assumed a key and prominent role in that.”

Issa noted, “This is a very good indicator. [This momentum] could eventually lead to lowering the voting age and the age of eligibility to run for office. There is a need for young people who are full of energy and can bring new ideas to be present in parliament.” He concluded that this category of youth attended many workshops and tests of life in the field, the protest movements and advocacy campaigns in recent years.