Lebanon has one of the highest overall gender gaps in the world, ranking 145 out of 153 countries. 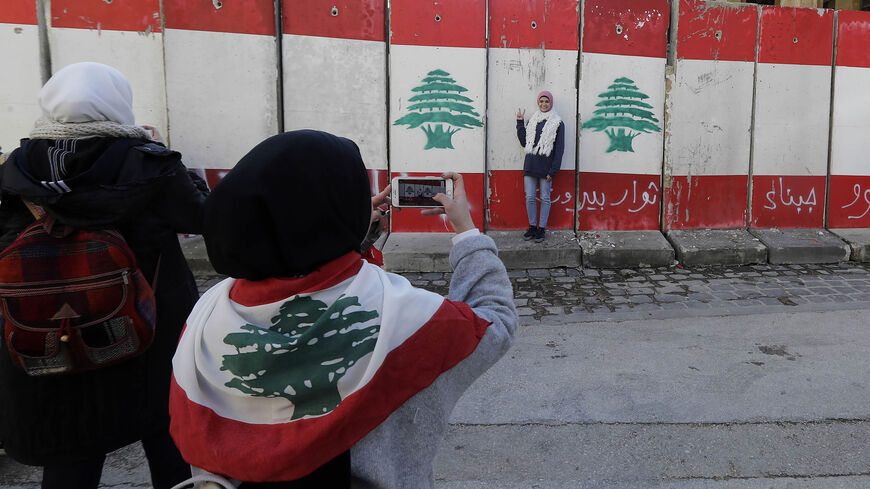 A woman takes a photograph of another standing in front of a wall of cement blocks, set up by Lebanese security forces to bar a street leading to the parliament building, Beirut, Lebanon, Jan. 24, 2020. - Joseph Eid/AFP via Getty Images

BEIRUT — The Beirut port explosion made Najat Saliba go into politics as a “counterreaction.”

I felt like I had to step out of my ivory tower in academia and start actually pushing for a new way of living forward,” the atmospheric chemistry specialist told Al-Monitor. Now, Saliba is one of eight female representatives in the Lebanese parliament, a record number of women among the 128 seats. Lebanon has one of the highest overall gender gaps in the world, and some of these women aim to fix that, now from inside the institutions.

"It is not easy to implement a gender agenda in a sexist parliament, but I will fight for it,” said Halime el-Kaakour. The newly elected member of parliament is known for her feminist agenda. "My expertise and my beliefs in gender equality have been one of the main reasons for attacks during my campaign, and it still continues,” Kaakour told Al-Monitor. But she is not going to give up. As one of the faces of the feminist claims during the protests of the October 17 revolution in 2019, she is committed to work toward better policies for women.

The 2022 parliamentary elections secured eight seats for female representatives, two more than the 2018 vote. But despite this progress, they only represent 6.25% of the parliament. Half of these women — Saliba and Kaakour included — come from the protest movement. "It is a great victory for us women to show that we treat each other on an equal basis,” Saliba said. It was a feminist revolution.”

"You can't talk about rights without including a feminist agenda. The revolution broke a lot of barriers when they normalized talking about gender rights and gender issues in public spaces,” said Myriam Sfeir, director of the Arab Institute for Women.

But almost two years later, the economic crisis and the critical social context exacerbated by the Aug. 4 port blast are used as an argument to tell activists and politicians that now it is not the time to work for women's rights.

Lebanon has one of the highest overall gender gaps in the world, ranking 145 out of 153 countries in the World Economic Forum Gender Gap report 2020. Political representation is one of the most affected areas. Despite being very politically involved on the ground or through voting patterns and having a higher education level compared to others in the region, women have historically been excluded from decision-making positions in both public and private sectors.

It was not until 2004 that women participated for the first time in Lebanon's government with two female ministers.

Women in Lebanon have been suffering this absence of female representatives. For instance, in the approved subsidized food basket launched some months ago, women's hygiene pads were absent.

"There is not a political will in having better policies for women since there is a lot of pushback on the level of changing the status quo,” denounced Sfeir. She doesn't see a higher number of female representatives as the solution to the gender inequality, since some of these newly elected members of parliament are not advocating gender rights.

Our priority is to have in parliament both men and women who are holders of a feminist agenda,” she said.

Saliba agreed, saying, "This would help us to get rid of all these macho men who believe that the world revolves around them and who have set this male character-dominated way of doing politics.”

Lebanon's electoral law doesn't impose quotas on the parties list, but also there is no gender quota in the political system.

"In a country obsessed with quotas, we don't have gender quotas; it’s that ironic,” Sfeir noted, referring to the quotas that organize the Lebanese political system according to religious sects.

A gender quota is a positive discrimination measure used in many countries in order to secure an equal representation of men and women in public institutions. The Lebanese women's rights movement has been pushing for this legislation for years but it is yet to be approved.

"Women's political participation and the quota is something that all parties agree on, but when it comes to approving it no one wants to flag it as their battle,” Sfeir added.

The absence of a gender quota is one of the main reasons for women's poor representation in Lebanese politics. A woman who wants to enter the political sphere has to face laws and traditions that are embedded in a system based on patriarchal religious views and controlled by male political elites, according to the report titled "Women's Political Participation in Lebanon: Perspectives from Mount-Lebanon" by the Euro-Mediterranean Women’s Foundation. Each of them also has to confront their own socio-economic barriers.

In the 2022 elections, 157 out of the 1,043 running candidates were women, which represents 15% of the overall candidacies. But the results showed one woman per every 18 men (5%) in the Lebanese parliament. And those who landed their seat had to walk a rocky road to get there.

"I have had more obstacles than men, especially regarding violence against women in politics,” Kaakour said. "There have been rumors about my personal life, which my male competitors did not have to face.” The author of the book "Lebanese Women Journey to the Parliament" thanked those men who helped her fight these stereotypes ”by deciding to support her."

"As a person trying to swim against the flow, it is very challenging to do my job because they are trying to harass us a lot, especially on social media,” Saliba said. According to a UN Women study on female candidates during the 2018 parliamentary elections, 78.6% declared to have been exposed to various types of violence against women in politics. In 85% of these cases, it was psychological violence.

Hostile online and offline environments and the denial of media exposure and coverage are just other tools to dissuade women from political activity, shutting them away in the traditional stereotypes and the domestic area of life. But the absence of women in any institution only shows the lack of representation of half of the population, and that shows to be one of the biggest threats for democracy.