Many Israeli Arabs believe that the unification of the Arab parties into one joint list and the momentum this move has generated will be translated into high voter turnout in the Arab sector and real change. 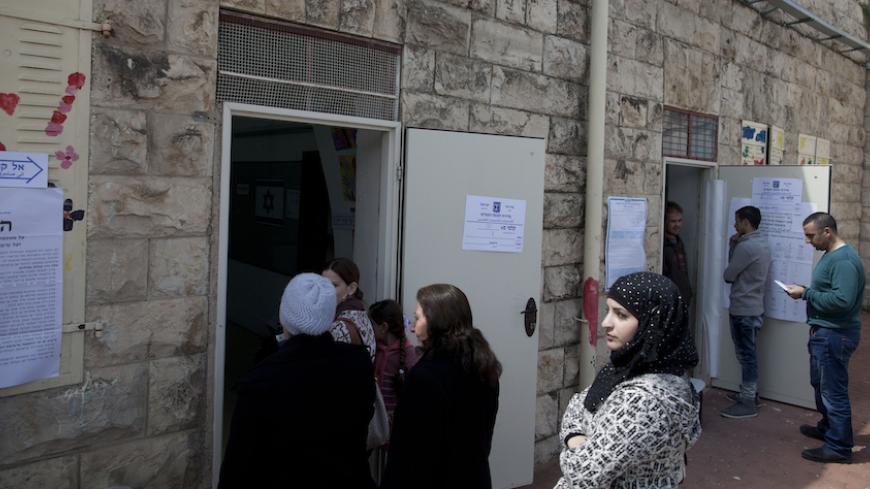 No one who has toured the Arab communities in recent days needs to wait for the exit polls to realize that a clear-cut and historic turnabout has taken place in this Israeli election, at least among the Arab sector. It is poised to rock and reshape Israel's political map.

As of the time of writing (March 16), one day before the general elections, it remains uncertain whether the predominantly Arab Joint List will indeed become the third-largest party in the new Knesset, as the polls predict. However, there isn't a shadow of doubt that the whole Joint List is greater than the sum of its parts. The unification of the Arab slates has been conducive to a political momentum the likes of which the Arab sector cannot recall. The circumstances that brought about the unification also catalyzed the Arab population to do away with their boycott of the Israeli elections since the events of October 2000.

During the previous elections in January 2013, I made a similar visit to Umm al-Fahm and the communities of the Triangle, and wrote about their frustration and disappointment in the Israeli political system that left many Arab voters at home. Now this avoidance seems to be a thing of the past. Although only two years have passed since those elections, it nonetheless feels like a generation has elapsed.

In Umm al-Fahm, Arraba, Musmus and Baqa al-Gharbiyye, everyone is convinced that once the final tallies are in, the pollsters will be surprised by the high number of seats that the Joint List will have won and the high voting rate in the Arab sector. Many talk about a turnout similar to the Jewish one. Others go even further, suggesting that given the current circumstances, Arab turnout is going to be even higher.

The Joint List, headed by attorney Ayman Odeh, has been able to unite the Arab vote and give hope to many of those who thought they would never again take part in the Israeli democratic process. Many of the champions of this change are young people who will vote for the first time. For them, this is a momentous occasion. The predominant feeling in the Arab communities is that only a massive turnout by the entire Arab population will bring the change it needs. Those who previously boycotted the elections are now saying they will do whatever is required of them come election day to keep Foreign Minister Avigdor Liberman out of the Knesset while making the Joint List a political powerhouse.

Liberman, whose Yisrael Beitenu initiated raising the electoral threshold to block the Arab parties, among others, certainly did not predict the reactions that would appear to change the voting patterns of the Arab sector. The very fact that Liberman's slate is trailing in the polls and barely grazing the threshold gives Arab Israelis a great deal of satisfaction.

"We want 15 seats. We want ministers in the government, at least three," Mustafa Mahmid from Umm al-Fahm says. "I'm an Israeli citizen and we want equality. There is no Muslim, there is no Christian and there is no Jew. We are all equal. We really do want coexistence. Liberman comes from Russia, so let him go back there. This is our land, and that's the way it will stay. We didn't run away anywhere. We stayed here, in our land."

At a cafe, the voice of the chairman of the General Elections Committee, Justice Salim Jubran, came on TV during a special elections advertisement. After explaining the importance of exercising the right to vote, he turned to the Arab citizens with a personal message: "I would like to address the voters — men and women — from the Arab sector, of which I am a part." Noting a sharp and regrettable drop in voter turnout, he added, "It is incumbent on us to vote," he said. "Failing to vote does not really yield any benefits and has no value."

Al-Monitor asked the cafe's patrons whether they were going to vote, to which they unanimously replied in the affirmative. "Sure, sure. We have to go. We have no other choice. The threats by Ministers Naftali Bennett and Liberman have united us." One patron, Abu D., motioned that he wanted to speak in private, saying, "Listen, I didn't want to say this next to everybody, but in my family Buji [Zionist Camp leader Isaac] Herzog gets five votes, and I'm one of them."

Asked if he intends to vote for the Zionist Camp, Abu said, "Yes, this is what we decided in my family. They're all voting for the Joint List, but five were selected to vote for Buji because we want him, too. We're sick of the incitement against us. He will do something about it."

He said he doesn't think there are a lot of people like him, but that he knows of "other families that have decided to give Buji some of their votes, give him a chance."

In contrast to this peremptory assertion, one often encounters an argument by Arab voters who claiming that as members of the communist Hadash Party, they would find it hard to vote for a slate that includes the Balad Party and members of the Islamic movement.

"I have voted for Hadash all my life and now I will vote for Meretz," said Naim from Baqa al-Gharbiyye. "I'm not saying that out loud, but I know that many of my friends who support Hadash and have been active all those years have decided to cast their vote for Meretz. Partly it's because they can't vote for [Knesset members] Haneen Zoabi and Jamal Zahalka, and partly also to save Zehava [Gal-On's] party from vanishing. We have great respect for those Knesset members."

I drew his attention to the fact that Meretz's small headquarters in Umm al-Fahm, which I had happened to pass, seemed deserted. In Baqa, the party has no presence.

"What do you want? You want them to shout they're voting for a Zionist party?" Naim chuckled.

The people Al-Monitor surveyed in the Arab communities doubt that the elections will bring about a swift and dramatic change in the situation of Arab Israelis. The injustice and disenfranchisement have been going on for many years, and no one expects the situation to be fixed overnight. Many lay blame on the Arab Knesset members who have not done enough — according to their voters — for the Arab public, instead taking care of "other business."

And yet, even though the Joint List consists of four different slates, each one with a markedly different ideology, at least at this time, a day before the elections, it appears to be the right tool at the right time to fight back.

"Let me explain it in your own language," said Majid Mahmid. Quoting the Talmud, he explained, "You guys have a saying in [Hebrew]: 'If someone is out to kill you, kill him first.' Right, that's what you say? So this is what we're doing. Not with violence, not by cursing, not with incitement, but with our right to vote. This is how we will bring Liberman down and bring Bennett down. This way, we will feel that we have done something."

The Joint List's billboards address precisely these sensitive points. "Our strength is our unity," one reads, while a second adds to the sense of urgency: "This is our chance." The general feeling is that everyone realizes that this election offers a unique and temporary opportunity.