On Iran deal, Republicans cut off their nose to spite their face

A letter written by 47 Republican senators to the Iranian government highlights the deepening divide in US Congress on the pending Iran nuclear agreement. 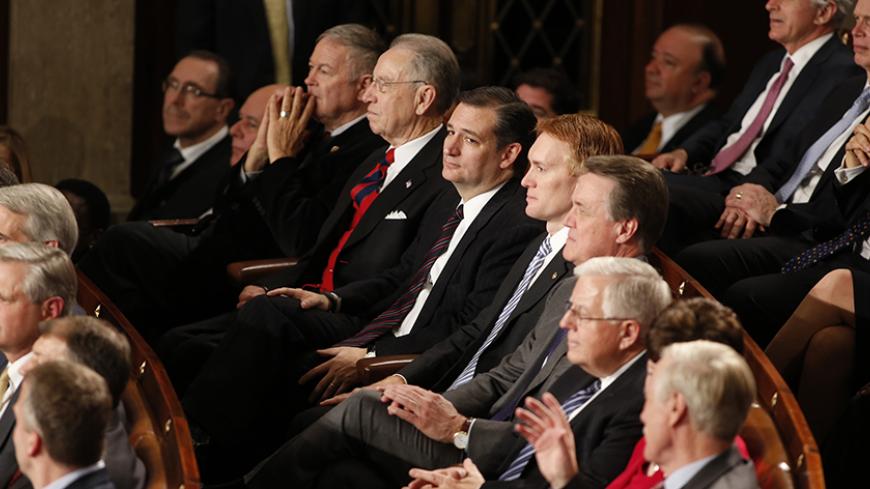 US Sen. Ted Cruz, R-Texas, (C) and Republican colleagues listen as US President Barack Obama delivers his State of the Union address to a joint session of the US Congress on Capitol Hill in Washington, Jan. 20, 2015. - REUTERS/Larry Downing

The partisan struggle in the political corridors of Washington reached unprecedented heights this week, with Iran becoming the focal point for fierce contention between Republican members of Congress and the Barack Obama administration. The latest display of these sharp internal divisions over the Iran talks has come from a provocative letter by 47 Republican senators to the Iranian government. The letter marks a direct interference by US legislators in the negotiations, with senators such as potential 2016 Republican presidential candidates Marco Rubio, Ted Cruz and Rand Paul co-signing the message that purported to emphasize the innate fragile nature of any would-be agreement with Iran. However, in their desperate attempt to dissuade Iran from reaching a deal, the Republicans have harmed US credibility on the international stage more than they know, or perhaps even care to understand.

The letter signaled not only continued Republican obstructionism toward seemingly anything President Obama does, but also that the United States is potentially no longer a cohesive entity in terms of how it conducts itself in global affairs. In fact, what the Republicans have done with their attempt at scuttling the diplomatic efforts aimed at peacefully resolving the Iranian nuclear dispute, is to make a claim that has very rarely been made in US history: that the US government’s executive branch does not conduct the nation’s foreign policy.

As Iranian Foreign Minister Mohammad Javad Zarif said in his response to the Republican letter, “It seems that the authors not only do not understand international law, but are not fully cognizant of the nuances of their own Constitution when it comes to presidential powers in the conduct of foreign policy.”

Harvard law professor Jack Goldsmith said in regard to the criticism of the Republicans’ understanding of the constitution and international law: “If, in fact, the 'P5+1' and Iran conclude a nonbinding 'political' agreement, there is little doubt about the President’s constitutional authority to make the deal on his own.” He added, “The letter states that 'the Senate must ratify [a treaty] by a two-thirds vote.' But as the Senate’s own web page makes clear: 'The Senate does not ratify treaties.'”

However, the principal error committed by the Republican letter is that it conveniently ignores the primary way by which a nuclear deal with Iran will be enacted — through a UN Security Council resolution. For as much as members of Congress have expressed dire concern for how countries such as Saudi Arabia and Israel would fare after a nuclear deal, they hardly ever mention that the United States is negotiating with Iran alongside its longtime allies France, the United Kingdom and Germany, as well as Russia and China. If a deal is reached, the Security Council would pass a resolution enacting its terms, which Congress has no authority over rescinding. If Congress or a future US president were to unilaterally break US commitments under any deal, the United States would be internationally seen as violating the Security Council resolution, and it — not Iran — would become fully isolated from the international community.

It is also clear that this letter is not an effort to assess any deal with Iran based on its merits. The manner in which these Republicans are openly trying to undermine Obama and major US allies in reaching an agreement with Iran is grounded in their desire to appease major campaign donors — who above all else seek to advance hard-line “pro-Israel” positions more so than US interests. Most prominent among these donors is casino mogul Sheldon Adelson, who popular journalist Bill Moyers has described as the “unofficial head of the Republican Party in America” and the “uncrowned King of Israel.” Adelson is a vehement opponent of the two-state solution to the Israeli-Palestinian conflict, argues for expansionist Israeli policies and has called for a nuclear bomb to be dropped “somewhere in the Iranian desert." Sen. Tom Cotton, R-AR, who crafted the Republican letter, has received significant contributions from Adelson and other like-minded individuals and groups.

Despite all of these recent efforts from within the US political system aimed at sabotaging the nuclear negotiations with Iran and putting the world on the path to another devastating war in the Middle East, the diplomats of Iran and the P5+1 have made significant progress toward reaching a deal during the past few weeks. After the latest round of talks between the P5+1 and Iran in early March, EU foreign policy chief Federica Mogherini said she believes “a good deal is at hand." Zarif also stated that the sides are “very close” to a deal. It is thus fair to say that the Republican letter can be described as nothing other than an abject failure. It in fact has spurred criticism not only internationally but also across the United States, with numerous major newspapers expressing outrage. If a deal with Iran is reached by the end of this month, it is certain that this petty letter will be relegated to the dustbin of history.