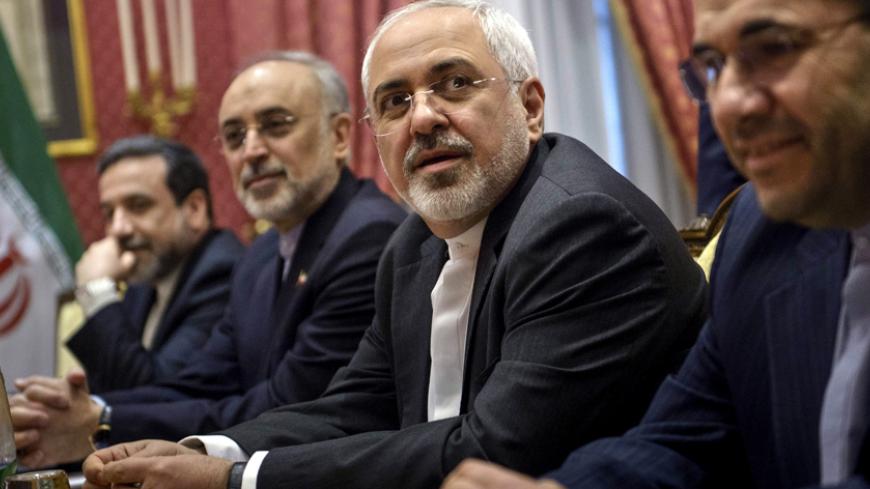 Iranian Foreign Minister Mohammad Javad Zarif (2nd R) waits for the start of a meeting with a US delegation at the Beau Rivage Palace Hotel in Lausanne on March 26, 2015, during negotiations on the Iranian nuclear program. - REUTERS/Brendan Smialowski

As talks over Iran’s nuclear crisis reach a critical phase not seen since negotiations began in 2005, Western media, Iran experts and politicians, more frequently and nearly unanimously, assert that Supreme Leader Ayatollah Ali Khamenei is the foreign policy decision-maker in Iran. This view, however, does not reflect the entire picture.

In 2013, during his presidential campaign, Hassan Rouhani voiced a rather unusual and unprecedented argument. At a news conference, in response to a journalist, he said, “You say that the president and his government do not have any say in foreign policy and [only] the supreme leader does. But [the reality] is not like that.”

During Hashemi Rafsanjani’s presidency (1989-1997), he made numerous gestures toward the United States — toward Presidents George H.W. Bush and Bill Clinton — all the while Khamenei supported the doctrine of “the West minus the United States.”

During Reformist Mohammad Khatami’s presidency (1997-2005), reconciliatory foreign policies were pursued with even greater zeal. Iran cooperated closely with the Americans in toppling the Taliban and the establishment of the new Afghan government.

The most glaring conciliatory move came in 2003, when Iran, informally through Swiss Ambassador to Tehran Tim Guldimann, offered the United States a grand bargain that aimed to solve the two countries’ disputes on all fronts.

Another shift in Iran’s foreign policy occurred after Rouhani took office in 2013. His election gave an impulse and a new direction to the stalled nuclear talks. More interestingly, the foreign ministers of both Iran and the United States held numerous and unprecedented bilateral talks, something unimaginable two years ago.

Some may argue that Ayatollah Khamenei had no choice but to work toward resolving the nuclear issue since the country was facing a dangerous economic abyss. This argument, however, assumes that political decision-makers necessarily and always make their choices based on logical, mathematical calculations. But it ignores the established and proven role that perceptions and misperceptions play in the process of foreign policy decision-making.

For instance, there are strong indications that Khamenei, right or wrong, is convinced that by adopting a “resistance economy,” the country would be able to successfully confront sanctions. Yet Rouhani continues to seek nuclear talks that would see Iran’s economy interrelated with Western economies once sanctions are removed.

Considering Khamenei’s grassroots base of anti-Western conservatives, he would see himself most vulnerable if he moves toward compromise, or even communication, with the adversary. Therefore, compromise is not a given. The role of Mohammad Javad Zarif, as Iran’s leading negotiator, in shaping Khamenei’s perception of nuclear talks is inarguable. The way he portrays the atmosphere of talks — whether it is respectful or humiliating, or conveys facts, hopes and fears — shapes Khamenei’s mindset and position toward a nuclear compromise.

Iranian foreign affairs that are not of a security nature are handled by the Ministry of Foreign Affairs. Security-related issues are the responsibility of the Supreme National Security Council (SNSC), which plays a major role in shaping Iran’s foreign policy. US-Iran relations and the nuclear dossier, for example, are two subjects that are part of the council’s agenda.

The council is headed by the president, who then appoints the secretary. The secretary acts as a representative to the supreme leader as well.

Article 176 of Iran’s Constitution explains that the members of the council are to consist of the heads of the government’s three branches, the chief of the Supreme Command Council of the armed forces, the chief commanders of the army and the Islamic Revolutionary Guard Corps, the head of the budget and planning, the ministers of foreign affairs, interior, intelligence and security, and another representative of the supreme leader. Meanwhile, if circumstances require, additional ministers or officials may also be invited to attend council meetings but have no vote.

Questions related to foreign policy can be raised within the council, the Ministry of Foreign Affairs or by any other governmental institution. Questions can even be raised by the office of the supreme leader.

The SNSC’s Foreign Relations Committee is tasked with researching and preparing reports on foreign policy cases. To that end, the committee may interview other officials outside of the council and in different governmental departments. The report usually outlines different options, including the pros and cons of each. Upon the report’s completion, it is handed over to the secretary of the council.

In complicated cases, the secretary normally asks the SNSC to discuss the report before sending it to the supreme leader’s office. After the SNSC deliberations, the final decision is made based on the view of the majority.

The supreme leader may ask for the advice of the SNSC members and, in some cases, invite others, including his advisers, for brainstorming. According to a former head of the SNSC’s Foreign Relations Committee, the overwhelming majority of cases see Khamenei siding with the decisions suggested by the council’s majority.

Undoubtedly, competition exists between opposing factions — the conservatives and moderates, primarily — to win Khamenei’s support and thus impact the final outcome of the process. This competition is now evident as nuclear negotiations are in progress. Iran’s supreme leader must act as the balancer between the two camps.

The first of these is that despite the pre-eminent position Khamenei holds in Iranian politics, he cannot escape the human trait of being influenced by those around him, particularly a president with millions of votes behind him.

Second, Iran’s supreme leader must go out of his way to balance the pressure of domestic forces, especially between the two major camps.