Contrary to Western stereotypes, Iranian women are avid followers of fashion and increasingly prominent in an industry that they hope to expand even to US customers. 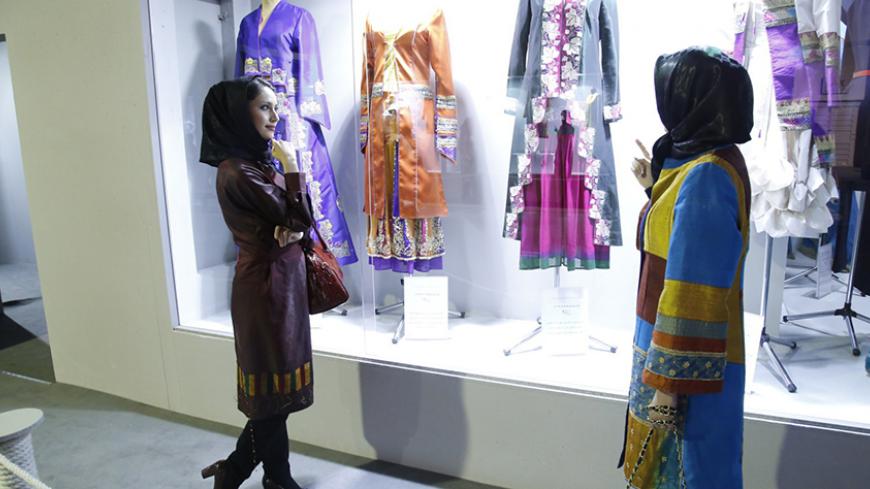 Women look at clothes at Iran’s first ever fashion week, that took place on Feb. 7-9 at the Sam Center in north Tehran. (photo by behpooshi.com) -

For the first time, Tehran has, too.

Contradicting the view prevalent in the West that the Islamic Republic of Iran is the land of the covered and the drab, young Iranian designers presented a variety of up-to-date styles for men and women during Iran’s first ever fashion week, taking place Feb. 7-9 at the Sam Center in north Tehran.

Six of the seven designers who participated are women — among them Neda Sadeghi. She told Al-Monitor in an email interview that Iranian women are increasingly involved in the fashion industry not only as customers but as business owners and investors, both “visible or as silent partners [as well as] managers and sales people.”

Sadeghi, who designs clothing for men, said she started designing five years ago and has been in business for three. Although her annual sales are tiny by Western standards — between $100,000 and $150,000 — the business is “God willing, growing” and expanding to neighboring states, she said.

“My main goal is to show my line to bigger companies in the West,” Sadeghi told Al-Monitor.

Other designers who participated were Pooneh Askarian, Orchid Ganji, Naghmeh Sadeghi, Monir Davaei, Nasim Akhavan and Arshia Deylami, all of whom design clothes for women.

“There are two sides in design and fashion in Iran,” Sadeghi said. “The everyday legally allowable to wear on the street [whose limits are constantly being pushed by women] and the other side of it is what they wear at home or at private parties. But you can still see lots of different designs and colors on the street and in all the boutiques.”

This reporter can vouch for the dramatic shift in what women wear in Tehran in public. Where dark colors and shapeless sacks were obligatory 20 years ago, now those under 50 prefer form-fitting tunics and dresses in bright hues.

Many of the outfits on sale in Tehran boutiques could easily be worn by women in the West; they could simply dispense with the pants or leggings and head coverings required to meet the Iranian government’s regulations for female attire in public.

Sadeghi said that to present designs at fashion shows, it was necessary to get government permission. “You do need to apply and get certain labels for each design,” she told Al-Monitor. “But in general any design or color can be sold in boutiques.”

Indeed, Iranian officials appear to have given up trying to dictate exactly what sort of hijab, or Islamic covering, women must wear. Increasingly, Iranian women can be seen in leggings instead of pants and headscarves so minimal that they expose most of a woman’s hair.

Sadeghi and other Iranian designers are well aware of trends in Western fashion, which Iranians follow on the Internet and when they travel abroad. Often the latest European fads reach Tehran before they hit the United States. In January 2005, this reporter flew from Paris — where pink was the big color that winter — to Iran only to find that all the fashionable women were also sporting pink clothing and accessories; the color only became popular in the United States months later.

“I always try to follow European and American design,” Sadegh said. “Because of the nature of my business I have to be up to date and this is also what my clients expect from me. Fashion design in Iran — unlike what is being shown in Western countries on television — is extremely up to date and constantly changing.”

Asked which Western designers she admired most, Sadegh said there were two: Alexander McQueen, who died in 2010 but whose London fashion house still designs cutting-edge clothing, and Balmain, whose founder, Pierre Balmain, died in 1982 but whose Paris company remains known for haute couture.

Sharif Razavi, who designs clothes and also manages an institute that mentors young designers, among them Sadeghi, told Al-Monitor that the field is increasingly popular for women.

“Women in Iran are really interested in fashion … and we have too many women who work as fashion designers,” he said. “Here in Iran, women [have started] wearing colored clothes recently. The women care about the cut of clothes.”

Razavi attributed the growth in the industry to greater freedom in dress permitted under the administration of President Hassan Rouhani as well as to the new generation of creative young designers.

Razavi, who said he admires designers Dior, Roberto Cavali and Chanel, was asked by Al-Monitor whether he thought American women might buy Iranian clothing if it was available to them.

He replied, “100%,” and added that he hopes Iran reaches a nuclear agreement with the United States as that might open the way for more trade and interaction between the two countries including exchanging “the latest information with each other” about fashion.