Foreign ministers from the P5+1 countries must now contend with the clock as they work out remaining hang-ups. 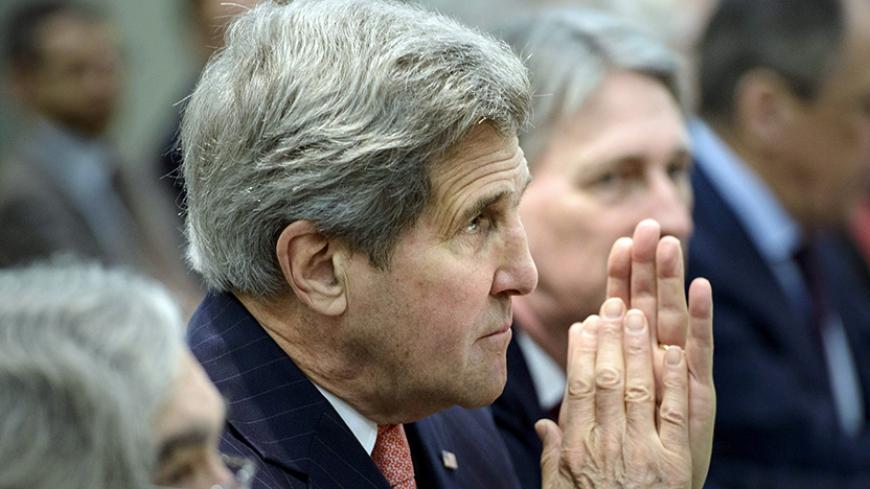 US Secretary of State John Kerry waits with others before a meeting with P5+1, European Union and Iranian officials at the Beau Rivage Palace Hotel in Lausanne, March 30, 2015. - REUTERS/Brendan Smialowski

LAUSANNE, Switzerland — Top diplomats from Iran and the six world powers (the five permanent UN Security Council members plus Germany, or P5+1) said they would be working late into the night on the eve of a self-imposed deadline to reach a political accord for a final Iran nuclear deal.

“There still remain some difficult issues,” Secretary of State John Kerry said March 30. “We are working very hard to work through those.”

“We are working late into the night and obviously into tomorrow,” Kerry said. “We are working with a view to get something done. There is a little more light there today, but there are still some tricky issues. Everyone knows the meaning of tomorrow.”

Russian Foreign Minister Sergey Lavrov returned to Moscow the evening of March 30 after all day meetings with counterparts on the Iran issue, but his spokeswoman said he would return March 31 to Lausanne if progress had been made toward completing the preliminary accord.

China’s Foreign Minister Wang Yi said he believed progress had been made here the past two days, and he remained optimistic. “I think it is possible to get a deal until tomorrow night,” Wang told journalists March 30 as he went for a brief mid-day walk between meetings here. “The gaps are narrowing. I am always optimistic.”

The gaps going into the final days of talks this key round had to do with mechanisms for lifting UN Security Council sanctions, the research and development that Iran could conduct on advanced centrifuges and enrichment in years 11-15 of a final accord, and the snapback mechanism for reimposing suspended sanctions should Iran be determined to violate the accord, and which body would determine that, Western diplomats said.

US and European diplomats disputed a March 30 New York Times report that there was a new crisis over how Iran would reduce its stockpile of low enriched uranium under a final accord as part of a set of measures to increase its breakout time to at least one year, saying there were a variety of solutions to that issue and none had been settled on yet. A Western diplomat said Iran prefers to reduce its LEU stockpile by dilution, rather than shipping it out to Russia, to retain only the agreed upon amount, but said it was not causing any crisis in the talks at this point.

“Contrary to the report in the New York Times, the issue of how Iran's stockpile would be disposed of had not yet been decided in the negotiating room, even tentatively,” a senior State Department official said March 30.

“There is no question that disposition of their stockpile is essential to ensuring the program is exclusively peaceful,” the State Department official said. “There are viable options that have been under discussion for months, including shipping out the stockpile, but resolution is still being discussed. The metric is ensuring the amount of material remaining as enriched material will only be what is necessary for a working stock and no more.”

Iran and the P5+1 more or less agree on the first 10 years of a nuclear accord, a Western diplomat at the talks, speaking not for attribution, told journalists March 30. It’s the issue of continued restraints on Iran’s research and development in years 11-15 of a final accord where there is still disagreement between Iran and the six world powers, he indicated.

US and European economic sanctions are not a problem anymore, while UN Security Council resolutions are, more on the political than technical level, diplomats said.

Negotiations between diplomats from Iran and the P5+1 were due to resume March 31 at 7 a.m. Reports said Russia’s Lavrov was due to return to Switzerland by 1 p.m.