Iran talks may go into night

There were signs that Iran and the six world powers were preparing to announce a partial agreement for a final Iran nuclear deal, but diplomats said the talks could go on into the night or the next day, April 1. 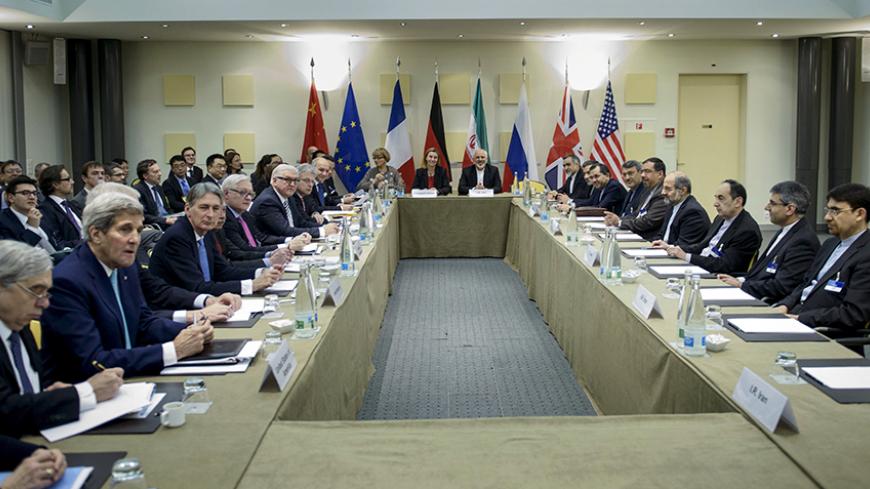 Officials wait for a meeting with officials from the P5+1, the European Union and Iran at the Beau Rivage Palace Hotel in Lausanne, March 31, 2015. - REUTERS/Brendan Smialowski

LAUSANNE, Switzerland — Diplomats from Iran and six world powers seemed poised to potentially announce a political agreement here on major elements of a final Iran nuclear accord, but said they could be working into the night or next day.

“Our experts and diplomats are working very hard around the clock to see if we can get to an agreement," a senior State Department official said at 6 p.m March 31. " We will of course keep working if we are continuing to make progress, including into tomorrow, if it’s useful to do so.”

Iranian officials said they were also prepared to work as long as needed.

"The deal will be done when we have solutions," Hamid Baeedinejad, the Iranian Foreign Ministry Director General and head of the Iran technical team, told reporters March 31. Iran’s negotiators "will stay as long as it's necessary"

“My impression is the working groups last night were successful in narrowing gaps,” Ali Vaez, senior Iran analyst at the International Crisis Group (ICG), told Al-Monitor. “And today they are in a much better position for reaching a mutually acceptable formula.”

In another sign that agreement could be imminent, Russian Foreign Minister Sergey Lavrov returned from Moscow to Lausanne this afternoon, saying the chances to reach a political deal were “great.”

“The chances are great, but you can never be 100% confident,” Lavrov told a Moscow press conference before returning to Lausanne today.

Lavrov upbeat on an #IranTalks deal. His remarks in full from my colleague @KathrinHille in Moscow pic.twitter.com/ypddLfD06g

“These chances are quite realistic as long as none of the participants in the negotiations tries to raise the stakes to get something extra instead of maintaining a balance of interests,” Lavrov said. “As long as that balance is formed, I think the [prospects] for a deal are very good.”

Western diplomats indicated March 30 that there was already agreement, more or less, on the first 10 years of a final nuclear accord. But differences had persisted here until the final day on two key issues: the lifting of UN Security Council resolutions and the research and development that Iran could conduct on advanced centrifuges in years 11 to 15 of a final deal.

Regarding the lifting of UN Security Council sanctions, “There are different options,” Lavrov said March 31. “A full cancelation or an initial suspension followed by an abolition in a legal sense.”

“But what in practice this must mean,” Lavrov continued, is “that the sanctions should no longer work and no longer hinder the development of legal trade and economic activity between Iran and its foreign partners.”

Some Western countries, including France, by contrast, had wanted a “snapback” mechanism in the suspension of UN Security Council sanctions, so that a new UN Security Council vote would not be required to re-impose sanctions should Iran be determined to be in violation of any final nuclear agreement.

Whether those differences had been resolved even within the five permanent members of the UN Security Council (P5+1) was not yet clear. But diplomats stressed that what was anticipated to be announced later today by way of a political understanding was not the full final Iran nuclear deal itself, but the prelude to three more months of intensive negotiations on the technical details of the final accord, which is expected to be called the Joint Comprehensive Plan of Action.

“I've been telling the German media we're in a bit of a crisis with the talks; perhaps we have a bit of a new approach, we will see,” German Foreign Minister Frank-Walter Steinmeier said at breakfast March 31.