Hard-line Iranian officials have condemned the United States and Saudi Arabia for the bombing in Yemen and have warned of consequences for Saudi Arabia. 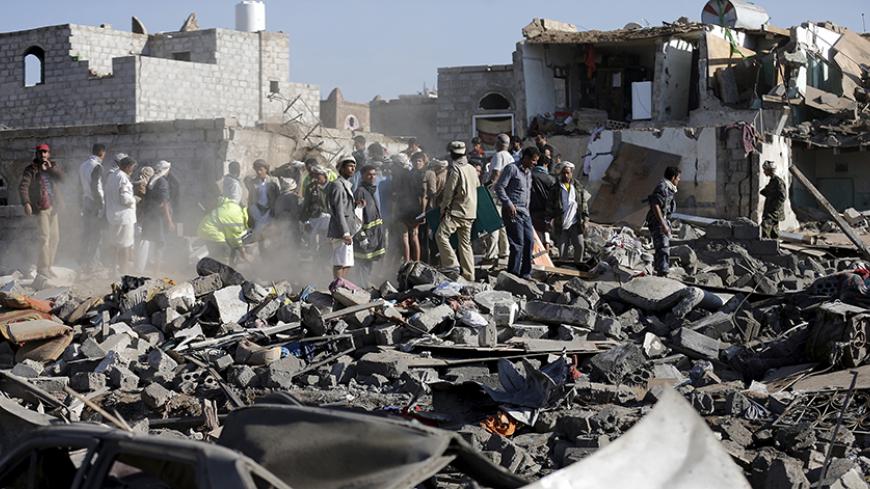 Civil defense workers and people search for survivors under the rubble of houses destroyed by an airstrike near Sanaa airport, March 26, 2015. - REUTERS/Khaled Abdullah

Iranian officials and military commanders have condemned the bombing of Yemen by a coalition of countries led by Saudi Arabia against Houthi rebels.

Iranian Foreign Minister Mohammad Javad Zarif, who's in Switzerland for the nuclear negotiations, called for “an immediate halt of Saudi Arabia’s military operations in Yemen.” He added that the attack “would escalate tensions in the region.”

Hamid Aboutalebi, President Hassan Rouhani’s adviser for political affairs, asked rhetorically on his Twitter page, "Will the attack of the richest Arab country against the poorest country of the region, and killing innocent people who have nothing to lose, bring security and stability?” He said one of the reasons for the attacks on Yemen for Saudi Arabia and Egypt was to “create national unity” and “eliminate domestic national security concerns” via a military entanglement.

Given the regional sectarian dynamics, the attack was also condemned by a number of high-ranking foreign policy and military officials as well, who were much more harsh in their condemnations. Gen. Massoud Jazayeri said, “The attack the Yemen was an order by America to its mercenaries,” adding, “America and its allies, whatever war they’ve started in the last years, have encountered a miserable defeat.”

Alaeddin Borujerdi, the head of parliament's’s National Security and Foreign Policy Committee, warned that Saudi Arabia should know that “war is not always limited to one point.” Borujerdi blamed the United States and said Saudi Arabia and its allies would have not taken such a military action if not for US support and permission.

Ismael Kowsari, another National Security and Foreign Policy Committee member, said, “This action will end to Saudi Arabia’s detriment and will shake the foundations of the Saudi government.” He also blasted the United Nations for not condemning the attack.

Mansour Haghighatpour, the deputy head of parliament’s National Security and Foreign Policy Committee, warned that Saudi Arabia was entering into a “quagmire” in Yemen, adding, “Saudi Arabia took a big gamble and it will certainly lose this gamble.”

The Houthis, whose political movement is called Ansarallah, belong to the Shiite offshoot Zaidi sect. They have received support from Shiite Iran since toppling President Abed Rabbo Mansour Hadi's government, and some claim even before. However, most Western intelligence officials believe that support until recently has been marginal. This may change, though, given the Saudi Arabian coalition of 10 countries all include Sunni countries, including Egypt and Turkey, two countries that hold symbolic and geopolitical weight in the Sunni world.

For now, Houthis, who reportedly have the backing of former President Ali Abdullah Saleh and his forces, have few options to respond.

Iranian analyst Sadollah Zaeri told Fars News: “Ansarallah does not have a hurried response to Saudi’s attack against Yemen under consideration. They will try to increase their power through a long-term political and security process and attempt to prevent Saudi’s next attacks through air defense weapons systems.”