From housewife to Kurdish peace negotiator

Once a housewife, Pervin Buldan rose to the forefront of Kurdish politics, driven by her husband’s extrajudicial murder, and is now a member of the team involved in the talks between Ankara and jailed PKK leader Abdullah Ocalan. 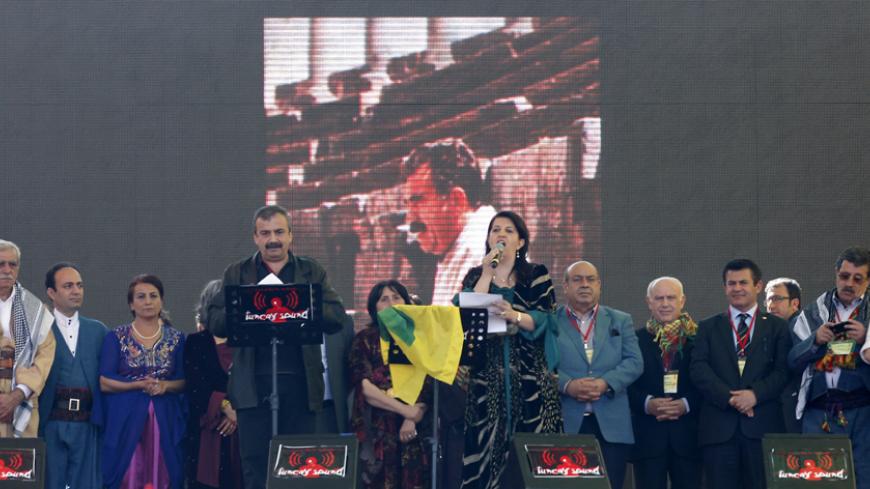 Pro-Kurdish politicians Sirri Sureyya Onder (3rd L) and Pervin Buldan (6th R) read the statement of jailed Kurdish PKK leader Abdullah Ocalan as they are flanked by other Kurdish politicians during a gathering to celebrate Nowruz in the southeastern Turkish city of Diyarbakir, March 21, 2013.

Long-running talks between Ankara and Kurdish representatives culminated Feb. 28 in an appeal by jailed Kurdish leader Abdullah Ocalan on his Kurdistan Workers Party (PKK) to lay down arms. Among the architects of the process, a Kurdish woman stands out: Pervin Buldan. A parliament member for the pro-Kurdish People's Democratic Party (HDP), Buldan started out as a modest housewife two decades ago. The event that pushed her into politics was the gruesome murder of her husband in 1994.

Buldan was born and raised in Hakkari, Turkey’s southeastern corner bordering Iran and Iraq. After finishing high school, she married her cousin Savas Buldan and the couple moved to Istanbul. In 1991, she gave birth to her first child, Necirvan. Her husband was a businessman.

Buldan led a dull and simple life in those years, but Turkey’s political scene was simmering as the state pursued an armed solution to the Kurdish problem. As a result of this policy, a so-called Gendarmerie Intelligence and Counter-Terrorism (JITEM) unit was set up illegally within the gendarme force, and a similar rogue group was formed in the police, involving mostly special forces officers. With those “deep state” structures in action, the Kurdish conflict peaked in the 1990s as Kurdish villages were emptied and burned down and extrajudicial killings occurred almost on a daily basis.

The Buldan family, which was closely involved in Kurdish politics, got its share of the turbulence as well. The occasional death threats that Savas Buldan received took on a more sinister meaning on Nov. 4, 1993, when then-Prime Minister Tansu Ciller told reporters, “We know who the Kurdish businessmen aiding the PKK are. We will call them to account.” A few months later, Kurdish businessman Behcet Canturk was murdered. Yusuf Ekinci and Namik Erdogan soon shared his fate.

On June 3, 1994, Savas Buldan was abducted by men who introduced themselves as police. Pervin, eight months pregnant, went into early labor with the impact of the news. While she gave birth to her daughter Zelal, Savas was found dead in Bolu, not far from Istanbul. His body bore traces of torture, with a single bullet in the neck. Relatives withheld the news from Pervin for the three days she stayed in hospital, saying Savas would soon visit her, while in the meantime laying him to rest.

More extrajudicial killings followed, all bearing the marks of the “deep state.” Confessions and testimonies in later years put one man under the spotlight: Mehmet Agar, Turkey’s police chief and neighbor of the Buldan family at the time. Agar would move from the building following the murder of another neighbor, businessman Omer Lutfi Topal.

Pervin was only 27 when she lost her husband. Her suffering gave way to an angry resolve, and only a year later she found herself in the streets with the “Saturday Mothers.” The women, protesting the disappearance of loved ones, held — and are still holding — sit-ins every Saturday in downtown Istanbul. Buldan joined the protests for four years, but felt their calls fell on deaf ears.

The Kurdish conflict had altered the lives of thousands of Kurdish women — some saw their villages burned down, others lost sons and husbands in extrajudicial killings or saw them off to prison. To help those women, Buldan founded an association supporting families who had lost loved ones. Finally, she decided to go into politics to raise a louder voice. Her bids for a parliamentary seat failed in 1999 and 2002 as her party could not pass the national electoral threshold. In 2005, she was among 1,000 women nominated collectively for the Nobel Peace Prize as part of an international initiative. In 2007, she ran again in the elections, this time as an independent, becoming the first woman to be elected to parliament from the eastern province of Igdir.

Throughout those years, Buldan pursued the murder of her husband, filing countless petitions, but the case did not move an inch. She was beginning to lose hope when a former member of the police special forces, Ayhan Carkin, dropped a bombshell in a 2008 TV interview, claiming he might have killed up to 1,000 people on behalf of the “deep state.” Later, he would confess to 19 specific unresolved murders, including that of Savas Buldan, saying he acted jointly with JITEM in extrajudicial killings both in the southeast and Istanbul.

The confessions led to an indictment in which the No. 1 suspect was none other than Agar, the former neighbor. Pervin went to the first hearing in Ankara, hoping to look Agar in the face. Agar, however, was a no-show in court. His co-defendants in the dock included Korkut Eken, a retired officer from the army’s special forces, whom Pervin held responsible for her husband’s murder and had tried to put on trial countless times before. Coming face to face with the suspects, Buldan shouted, “You are murderers, all of you! You are not human!” The accused responded with insults.

The case had raised much optimism at the outset but it has since stagnated, with all defendants released pending trial. Buldan has also grown pessimistic. Having lost faith in the judiciary, she believes South Africa’s Truth and Reconciliation Commission, created under Nelson Mandela’s leadership in the transition from the apartheid, could serve as a model for Turkey. In remarks to Al-Monitor, Buldan stressed parliament should be the body to work on shedding light on the murders.

“The unresolved killings are part of the Kurdish problem. … Not only Savas Buldan’s murder but all extrajudicial killings should be uncovered, taken to court and questioned. So many people perished in extrajudicial killings, massacres and under torture. As relatives of the victims, we still have a glimmer of hope that the murderers will be put on trial and punished,” Buldan said.

“Parliament is essentially a center of problem solving, an important decision-making body to solve such problems. A truth commission should be created. This can be the way to shed light on all murders. I believe parliament is capable of taking responsibility on this issue,” she added.

Buldan, who was re-elected in 2012, is part of the team of lawmakers with whom the government is holding talks in a bid to resolve the Kurdish issue. As part of the process, the team meets almost on a weekly basis with Ocalan on the prison island of Imrali, where the PKK leader is serving a life sentence. She yearns for an end to the bloodshed and sees the settlement process as crucial.

“Thousands of people have perished in four decades of conflict. Each of us had a share from the suffering, each of us paid a price. Now, with Mr. Ocalan stepping in, a project has been launched. It is a project that could drastically alter the equation not only in Turkey, but in the entire Middle East and bring peace to the Middle East too,” Buldan said.

“As part of this peace process … we have done what is up to us. We’ve heeded the calls, we’ve taken steps. I have to say, however, that the government has not displayed the same commitment. Concrete steps are yet to be taken. If the government takes real steps, I believe the process will finally exit the [climate of] confrontation and evolve into a peace process,” Buldan said.

“No one wants more bloodshed and suffering. No one wants to go on burying sons and husbands. People want to live in a region that is free in every sense; they want to be free and equal both politically and socially. We’ll do our best to achieve that,” she added.