In a first for Turkey, a court has penalized the state for failing to protect a woman who was killed by her husband. 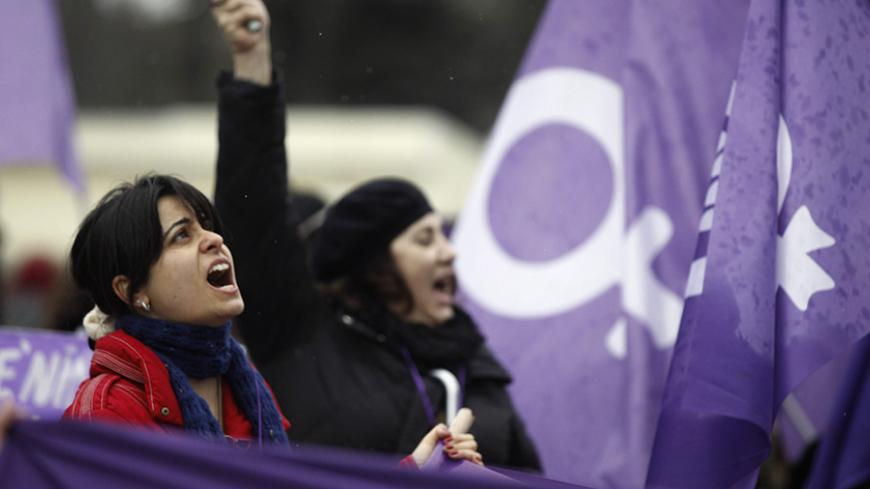 Women protest against the government and violence against women in Istanbul, March 9, 2014. - REUTERS/Osman Orsal

Almost on a daily basis, Turkish women perish at the hands of violent husbands. The murders have become a fixture in news bulletins, and security camera footage of husbands stabbing their wives in the streets can be found on the Internet.

Despite their frequency and ferocity, women’s murders are widely perceived as a domestic issue and treated as ordinary homicide. Both politicians and society tend to make no difference between those murders and the many others committed in the streets. But given the alarming number of cases and the killers’ peculiar motives, the murder of women appears to have become a distinct and systematic phenomenon.

According to figures by the We Will Stop Women Homicides Platform, a Turkish advocacy group, husbands were responsible for half of the women killed in 2014. In a recurring pattern, the victims had made or sought to make an independent decision about their lives, mainly divorce — meaning, they were killed for attempting to break free of social roles imposed on them.

Hence, the term “women’s murders” does not denote all murders in which the victim is a female, but rather those in which her gender is central to the murderer’s motive. That’s what makes them different from other kinds of homicide.

The advocacy group recorded 294 such murders in 2014, 237 in 2013 and 210 in 2012. The steady increase indicates that the women’s murders have become a systematic social phenomenon that calls for urgent measures by the state.

What if hundreds of workers were killed each year just because they wished to resign from their factories? Or if hundreds of people were slaughtered for attempting to convert to another religion? Would those murders have been treated as ordinary homicide? Then, what is the Turkish state doing today to stop women from being killed for particular reasons and at an ever-increasing rate?

The murder of Ayse Ince in April 2012 is a case in point.

The 34-year-old had been the victim of domestic violence ever since she married Mehmet Ince in 2002. In August 2011, he not only beat her but also stabbed her with a snap-off knife, prompting her to seek refuge with the police. In the ensuing trial, the court penalized the man with a fine, which it subsequently suspended. The beatings continued. Ayse lodged a complaint with the prosecutor’s office and asked for protection, but saw her request rejected. She then fled to her parents’ home and filed for divorce. In a matter of months, her husband managed to track her down and threatened to kill her. Ayse rushed to the police again. The police detained the man, only to release him later in the day, while advising Ayse to call the emergency line “if something happens.” A week later and in broad daylight, Ince stabbed his wife to death outside their daughter’s school in Istanbul. Ayse had no chance to call the police, as she collapsed after having been stabbed 17 times.

In the eight months leading up to the murder, Ayse had repeatedly pleaded for help — twice with the police and the courts and once with the prosecutor’s office. She received none. And she might have met the same fate even if her calls for help had been answered. According to police reports submitted to parliament, the women killed last year included 23 victims for whom protection orders had been issued. Another 21 had been granted “protection on call” but perished before they could call the police.

Following Ayse’s murder, her family mounted a legal struggle against the state for having rejected their daughter’s protection request and left her husband at large despite the death threats he made. The family sued the Ministry of Justice and the Interior Ministry.

In a landmark ruling in late May, an Istanbul administrative court held the Interior Ministry responsible for the murder, ordering it to pay 360,000 Turkish lira ($132,500) in compensation to the family. “Protecting its citizens’ life and property is a fundamental duty of the state,” the ruling said. “Though these types of murders have become well known and widespread in the country, the necessary attention was obviously not paid and protection measures were not enforced.”

The court’s judgment is a big, if not revolutionary, step against the tendency to treat women’s murders as ordinary homicide. A spate of similar compensation rulings could force relevant ministries to finally take the problem seriously and introduce tighter measures.

Similarly, the government is likely to feel pressure to fulfill its duties under the relevant international treaties and domestic laws that Turkey has already adopted, including the UN Convention on the Elimination of All Forms of Discrimination against Women, the Council of Europe Convention on Preventing and Combating Violence against Women and Domestic Violence and the country’s own Family Protection Law, which contains provisions both for the direct protection of women and restraining measures against men. A proper implementation of the existing laws alone could make a big difference in curbing the murders.

Stamping out the murders requires a comprehensive drive to promote gender equality and remove the barriers that prevent women from sustaining themselves as independent individuals, both socially and economically. Turkey should stop being a country where the killing of women is ordinary news. Turkish women should be able to make their decisions freely and assert their place in social and economic life, having an equal say with men. They seem ready for that. It’s about time the establishment fell in step.