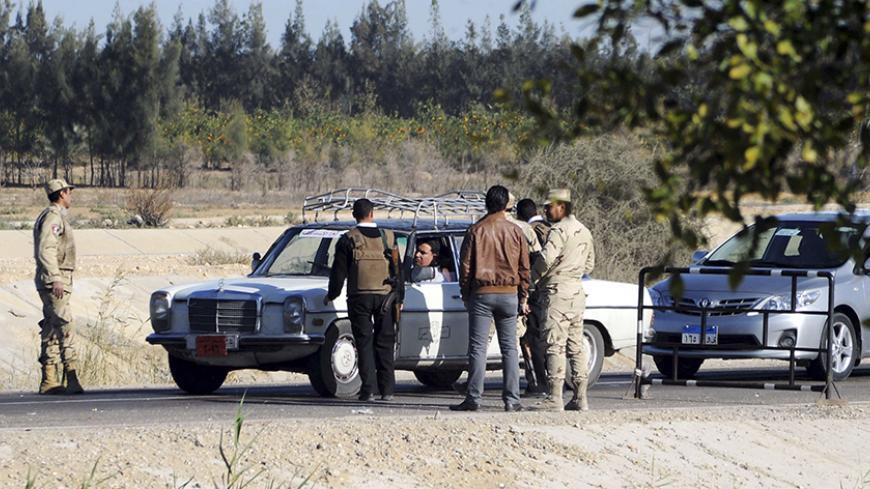 Egyptian security personnel stop cars at a checkpoint near the site where separate attacks on security forces in North Sinai on Feb. 26 killed 30 people, in Arish, Jan. 31, 2015. - REUTERS

Egyptian President Abdel Fattah al-Sisi on Feb. 24 issued a new decision concerning Law No. 8 on “the organization of terrorist entities.”

The law consists of 10 articles. Article 1 defines a “terrorist entity” and a “terrorist person,” and tackles the source of money, financing and the freezing of funds belonging to terrorists. The other articles specify the authorities tasked with drawing up a list of terrorist entities and the parties entitled to appeal their listing.

The law defines terrorist entities as any association, organization, group, gang, cell or other grouping, which — de jure or de facto, through any means, inside or outside the country — seeks to call for the harming of individuals, the spread of terror or the endangering of the lives, freedoms, rights or security of the people. The law also prohibits the harming of the environment, natural materials, antiquities, communications, land, air or sea transportation, as well as the harming and seizure of public or private funds, buildings or properties. It also forbids the obstruction of public authorities, judicial agencies or bodies, government interests, local units, places of worship, hospitals, institutions, science institutes or other public facilities.

These clauses apply to the mentioned entities and people whenever they practice or try to carry out any of these acts, even when not targeting the Arab Republic of Egypt.

According to Malek Adly, a lawyer at the Center for Economic and Social Rights, the anti-terrorism law offers a loose definition of a terrorist entity. Adly said the provisions of any law should be precise. Based on this definition, all parties, student unions, movements and human rights organizations run the risk of being deemed terrorist entities, especially because the sentence “de jure or de facto” does not immunize the legally recognized institutions against this definition.

Adly told Al-Monitor that the law was an alternative to the emergency law, which was adopted by former President Hosni Mubarak during his rule, to intimidate the community and tighten his security grip on the people.

Adly wondered what was meant by “even when not targeting the Arab Republic of Egypt,” and asked: “Will the law be applied to all those who threaten the security of other countries from within Egypt? Will the people planning, for instance, to harm the interests of Qatar, which is an opponent of the regime in Egypt, be deemed terrorists?”

According to the law, a terrorist is any ordinary person who commits or attempts to commit, incite, threaten or plan at home or abroad for a terrorist offense by any means, even if individually. The law prohibits contributing to such a crime in the framework of a joint criminal project. A terrorist is any person who commands, leads, runs, constructs, establishes, funds, becomes a member of or takes part in any of the terrorist entities stipulated in Article 1 of this law or contributes to their activity with their full knowledge.

The previous text did not say what constitutes a terrorist crime. Therefore, any act carried out by individuals that the authorities are not satisfied with may be placed in such category even if the act is not terrorism itself, Nejad El Borai, human rights lawyer and president of the United Group, told Al-Monitor.

Borai said that Sisi has overused his legislative authority and has taken advantage of the absence of the parliament. He added that the authorities in Egypt used to and still believe that intimidation is the best way to rule citizens.

The new law failed to garner the support of the state’s human rights organizations. Nasser Amin, member of the National Council for Human Rights, told Al-Monitor that even if the goal of the law is to deter the Muslim Brotherhood and the jihadist armed groups, the fact remains that its text is greatly defective as it gives the public prosecution sweeping powers in determining who is a terrorist and what is a terrorist entity.

Amin said in regard to Article 2 of the law, which stipulates, in part, that “the Public Prosecution draws up a list called the ‘list of terrorist entities’ to include the terrorist entities that the competent department decides to include on the list,” adding that such flexible phrasing increases the likelihood of misuse by officials.

For his part, Amro Ali, coordinator of the April 6 Youth Movement, said that the phrasing of the law tends to criminalize protest acts rather than terrorist acts, as it uses the wording “by any means,” which infers that the use of arms is equal in criminality to opposing power through social media. Under this law, the two acts disturb the public order of the state.

Ali told Al-Monitor that the April 6 Youth Movement will be targeted by the law as it is an opposition movement, and that the law will lead to the freezing of political life in Egypt and will eventually limit it to the supporters of the ruling regime.

According to Ali, the presidency is well aware of the increasing anger among Egyptians as a result of the deteriorating economic and political situation, and it wants to issue more laws with the aim of restricting any action that goes against its policy.