Syrian Turkmens are forgotten ally in war against Islamic State

Syrian Turkmens say they can play key role in fighting IS in northern Syria. 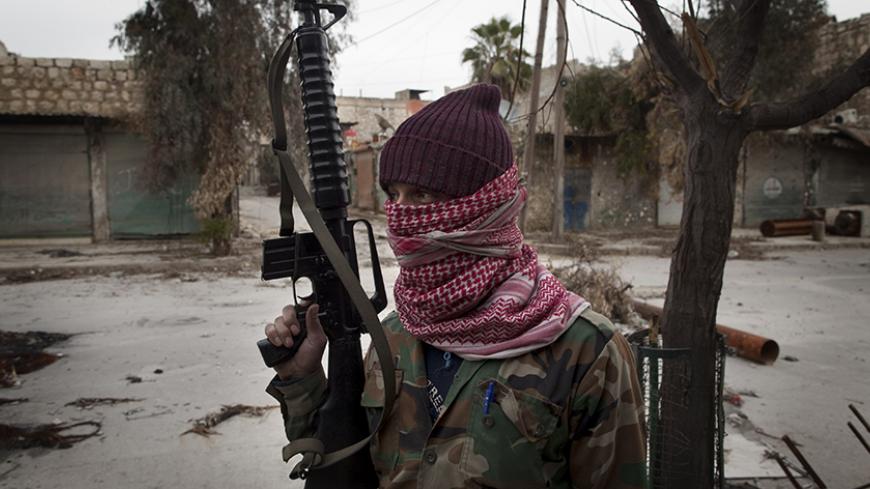 A Syrian Turkmen commander who spoke to Al-Monitor from the Bostanpasa district, at the front line of Syria’s second-largest city, Aleppo, says the international coalition against the Islamic State (IS) is not taking advantage of Turkmens willing to fight against the Islamic militant group.

The commander, who spoke without giving his name for security reasons, said, "IS attacks on our villages since August 2014 have increased. They have killed hundreds of Syrian Turkmens, beheaded our leaders in front of all of us. We have scores of young men volunteering to fight IS but we have problems supplying them with weapons. The whole world thinks Turkey is meeting all our needs. We wish it were so. If such had been the case, the Bashar al-Assad regime wouldn’t be so at ease in Damascus nor IS at Raqqa and Aleppo. The anti-IS coalition, if it wanted, could in a short time put together robust military formations of tens of thousands of Turkmens and score major successes quickly. But the international community is ignoring us and they don’t respond to our requests. We could contribute significantly to the war against IS but we are not getting any support.”

There have been reports of IS massacres in Syrian Turkmen villages since August 2014 that went unreported by the international media.

Another Turkmen fighter who fought against IS in the Cobankoy area north of Aleppo in 2014 said, “IS has tanks, artillery and armored personnel carriers. They have night vision and thermal equipment, all of them latest models. IS has no shortages of ammunition and logistics problems. We only have AK-47 rifles and Bixi machine guns. Our heaviest weapon is a 14.5 mm KPV [machine gun]. We have no night-vision capability. We go to the front with limited ammunition and with serious logistics shortcomings. We cannot pay our fighters. That compels our young fighters who are responsible for the well-being of their families to give up the fight and go to Turkey to make a living. This is not the way to cope with IS.”

Who are these Syrian Turkmens nobody seems to know about?

Huseyin Rasit Yilmaz of Economic Policy Research Center of Turkey (TEPAV), known for his studies on Turkic-speaking peoples of the world, said, "With close to 3 million people, Syrian Turkmens are one of the leading ethnic groups of that country. Turkmens mostly live in Latakia, Aleppo, Homs, Idlib and Rakka regions.”

Yilmaz said hundreds of thousands of Turkmens have forgotten their mother tongue, Turkish, under the assimilation policies of the Baath regime, but noted they have not given up their Turkmen identity. He added, "Turkmens formed a number of armed groups when the Assad regime began to persecute Turkmens, banned speaking of Turkish and observances of their traditions and committed massacres at the outset of the Syria rebellion. Turkmens who had a significant presence in the Aleppo area assumed important positions in Arab-dominated units of the Free Syrian Army. While expanding its presence, IS carried out major massacres in Turkmen villages and towns. The lack of weapons and ammunition in Turkmen units allowed IS to make advances. If only a bit of the international support given to Kobani had been given to Turkmen settlements, the area controlled by IS in northern Syria would have been much more limited.”

There are several reasons why the Syrian Turkmens could not unite under a single organization, as the Syrian Kurds did, during the four-year war.

The first is the internal dynamics of the Syrian Turkmens. Yilmaz said that in contrast to the Democratic Union Party (PYD), which succeeded in uniting Syrian Kurds under one roof by sometimes using their guns and applying force, the Syrian Turkmen Assembly, the most important superstructure of the Syrian Turkmens, has opted for democratic methods. Naturally the decision-making process of this parliament is cumbersome when compared with the PYD and similar organizations.

There are those who believe lack of credit being given to Turkmens — who have paid dearly in the fight against IS — and the splintered appearance of the Turkmen community stem from the Turkish government's misguided Syria policy. An expert in Ankara who did not want to be quoted by name said the Justice and Development Party government is forcing the Syrian Turkmens to fight against Assad forces first instead of against IS. Ankara is giving priority to setting up Syrian Turkmen armed opposition groups to fight against Damascus, hence the impossibility of a coordinated Turkmen stand against IS.

In Turkey, reporting by the pro-government media creates the perception that Syrian Turkmens are at constant war with Assad forces. This media almost never reports the Turkmen’s clashes with IS. The same expert claims that the basic reason why Turkey doesn’t want Syrian Turkmens to take an active role in the fight against IS is the potential for international support they might get, which would make them less dependent on Turkey.

Syrian Turkmens have set up a Syrian Turkmen Assembly in Turkey and are trying to unite under its umbrella. Abdurrahman Mustafa, the chairman of the parliament — which last met at the beginning of February in Ankara — told Al-Monitor, “We are the victims of a extremely tough process since 2011. We are targeted by intensive attacks from both the Assad regime and IS. Thousands of Turkmens have been massacred, tens of thousands have become refuges in other lands. We have masses of people in regime prisons we have no contact with. Despite all that, if we can still talk of Turkmen existence in Syria, if we are still standing up despite all the problems, this is because of the humanitarian assistance from Turkey. For this we are grateful to Turkey."

In sum, although they appear to be a splintered group speaking with diverse voices, Syrian Turkmens say they can play a major role against IS in northern Syria. They are severely disappointed by the neglect of the international community and lack of adequate weapons and logistics support. Given adequate support, Syrian Turkmens who are but a forgotten ally against the IS threat could assume a key role in first restricting and then eliminating IS-controlled territory. Of course, once IS militants are cleared from Turkmen villages and neighborhoods, then the Syrian Turkmens can play a vital role in holding onto those areas and in rebuilding a new Syria.