Can returned extremist fighters be rehabilitated?

Participants in a White House summit on countering violent extremism say the most useful aspect was exchanging information on the sidelines of the meetings about how to prevent recruitment of vulnerable youth and rehabilitate foreign fighters returning home from Syria and Iraq. 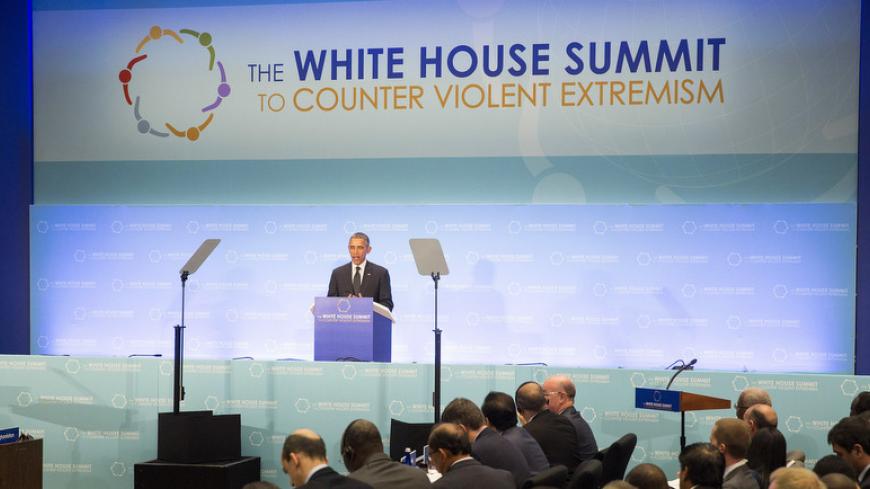 US President Barack Obama speaks during the White House Summit on Countering Violent Extremism at the State Department in Washington, Feb. 19, 2015. - REUTERS/Joshua Roberts

Authorities in Denmark’s second largest city of Aarhus couldn’t stop an ethnic Somali teenager from joining extremists fighting in Syria two years ago but they appear to have been able to rehabilitate him after he returned.

Jacob Bundsgaard, mayor of Aarhus, said that mentoring and working with the family of the young man — whom he did not otherwise identify — smoothed reintegration into Danish society after the youth returned “physically, mentally and emotionally exhausted” by his experiences. He has even been able to re-enroll in his old high school, the mayor said.

Bundsgaard, speaking to Al-Monitor after attending the Barack Obama administration’s Summit on Countering Violent Extremism in Washington on Feb. 18, conceded that the model used in Aarhus — a city of 330,000 — might not work in larger metropolises and different countries.

In Denmark, Bundsgaard noted, there is “a long tradition of cooperation between local authorities, while in other countries it can be difficult to get two types of police to work together.” But the same psychological factors are involved, he said, and the “signs of alienation young people are sending are the same. You need to organize your efforts in a way that fits local conditions.”

The issue of how to handle foreign fighters returning to their home countries from the wars in Syria and Iraq is attracting more international attention in the aftermath of terrorist attacks in France, Belgium and Denmark.

“The scale is huge in Europe,” Gilles de Kerchove, counterterrorism coordinator for the European Union, told a symposium at the Washington Institute for Near East Policy on Feb. 20. He estimated that 4,000 Europeans have gone to Syria and Iraq to fight alongside groups such as the Islamic State (IS) in the past few years and of this number, “20-30% have already returned.”

It is not possible to apprehend and incarcerate all these people, De Kerchove said, even if they could all be identified, since there is often not sufficient evidence to convict them of membership in terrorist organizations or other crimes. In France, for example, there are only about 100 such cases working their way through the courts, he said.

What’s more, putting returned fighters in jail may only spawn more extremists since many European prisons have become schools for radicalization. That appears to have been the case with Amedy Coulibaly, the petty criminal who attacked a kosher deli in Paris in January, killing four people before he died in a shootout with police.

Coulibaly — who claimed to be inspired by IS — was the son of immigrants from Mali. De Kerchove said that about 60% of all prisoners in France come from Muslim backgrounds — a staggering figure that suggests that a major cause of radicalism is the failure of European societies to integrate Muslim immigrants and their children.

For prison staff, De Kerchove said, a key challenge is detecting which inmates are falling under the influence of radical ideology as well as providing enough mainstream imams to steer prisoners away from extremist interpretations of Islam.

Authorities do not adequately understand whether radicalized inmates “should be in one place or spread around different prisons,” he added. Another alternative, he said, would be to offer reduced sentences to those who agree to participate in rehabilitation programs or allow others to avoid prison altogether.

“We don’t have a common approach in Europe,” De Kerchove said, noting that justice ministers from the 28 EU countries will be meeting to discuss these issues in mid-March. “It’s a huge challenge and we’re not there yet.”

The program in Aarhus stresses what Bundsgaard called “SSP” — social services, schools and police. It began in the aftermath of bombings in London and Madrid a decade ago and seeks to identify those at risk of radicalization because of factors including poor living conditions, personal or social crises, and isolation, he said. Mentors are assigned to at-risk youth to try to steer them back to mainstream society. Bundsgaard said authorities have also set up networks for parents whose children have gone abroad to fight.

“We advise them how they should communicate with their children … to convince them to come back,” the mayor said. Fathers are told not to show anger or order their sons to return. Mothers, he said, often play “a vital role” in persuading children to come home. “One of the things that will still melt their hearts are the mothers.”

In the case of the Somali youth, this soft approach appears to have worked. In May 2013, he left for Syria but by late November of that year, he was back in Denmark, telling his family, “‘I just want my old life back,’” Bundsgaard said. He said the young man was assigned a mentor and has stayed out of trouble. “It is actually possible to do something” to reintegrate returned fighters, the mayor said.

Participants in last week’s White House summit said the most useful aspect of the meetings was not the speeches by officials but the chance to talk in the corridors and exchange information with other counterterrorism practitioners.

Matthew Levitt, an expert on terrorism at the Washington Institute who had earlier expressed skepticism about the conference, told Al-Monitor that he was also pleased that President Obama had not shied away from identifying ideology as a motivating factor for the fighters, even if they came from criminal backgrounds or were the product of broken homes.

While rejecting the term “radical Islamic terrorism” — often used by administration critics including likely presidential candidate Jeb Bush in a major foreign policy speech Feb. 18 — Obama told the summit that “we must acknowledge that groups like al-Qaeda and [IS] are deliberately targeting their propaganda to Muslim communities, particularly Muslim youth. And Muslim communities, including scholars and clerics, therefore have a responsibility to push back, not just on twisted interpretations of Islam, but also on the lie that we are somehow engaged in a clash of civilizations; that America and the West are somehow at war with Islam or seek to suppress Muslims; or that we are the cause of every ill in the Middle East.”

It was important that Obama “put the onus on the Muslim community to stop hateful rhetoric and to be a positive influence,” Hedieh Mirahmadi, another participant in the summit, told Al-Monitor. Mirahmadi runs the World Organization for Resource Development and Education, a Washington-based body that has established a pilot project to identify individuals attracted by extremism and provide counseling to them.

The emphasis on prevention and rehabilitation is a welcome change from the post-9/11 US focus on military methods, said Rohan Gunaratna, head of the International Center for Political Violence and Terrorism Research in Singapore.

Gunaratna, who also attended the White House summit, told Al-Monitor that the “American response to terrorism after 9/11 was a kinetic and lethal one — catch, kill or disrupt.” Now, he said, “there is a shift toward smart power.”

Still, Gunaratna said it would be necessary to “contain, isolate and eliminate” IS and similar groups on the battlefield. Of those who return from fighting, he said, some are beyond rehabilitation. “Ten percent have to be incarcerated forever,” he said.