Why France should worry about its jihadist hopefuls

France, which has more citizens fighting with Islamic militants in Syria and Iraq than any other EU country, imposes travel restrictions on jihadist hopefuls and tries to "de-radicalize" Muslim girls seeking to join the Islamic State. 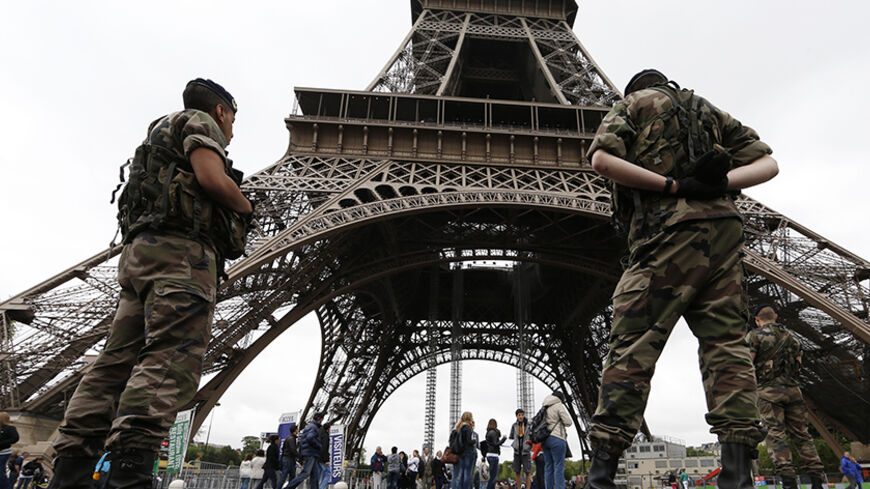 Soldiers stand by tourists as they patrol near the Eiffel Tower in Paris, May 8, 2013. President Francois Hollande had said the day before that France was taking the threat from Al-Qaeda in the Islamic Maghreb seriously after a purported leader of the Islamist group called for attacks on French interests throughout the world. - REUTERS/Gonzalo Fuentes

As of Nov. 6, some 1,100 French nationals and residents aged 20 to 30 were officially “involved in jihadist activities in Syria and Iraq.” About 400 are currently on the ground, including 60 noncombatant women, while the rest are either seeking to reach one of the two countries, or on their way back to France, according to Interior Minister Bernard Cazeneuve. Up to 90% are believed to have joined the Islamic State (IS). The rest are either fighting alongside or providing logistical support to smaller groups affiliated to al-Qaeda.

The number of French waging jihad has more than doubled since April 2014. In March 2013, there were only 50 French jihadists, mostly fighting in Syria. What is even more troubling is that France provides the largest number of jihadists of all the Western countries, so much so that one in three Westerners fighting in Iraq and Syria is believed to be French.

Why are so many French drawn to jihad?

First, one needs to look at those numbers in proportion to France’s total population. Relative to its population, France actually comes in third in providing militants, behind Belgium and Denmark. What's disturbing, though, is that this number has been continuously soaring since 2013. France has the largest Muslim population in Europe, estimated at about 4 million. But this alone cannot provide an explanation, as a good quarter of French jihadists are recent converts.

“There is undoubtedly a link between these youths’ socioeconomic background and their desire to join the jihad; a great majority of them come from immigrant backgrounds and France’s poor suburbs. They don’t see much of a future in France,” David Thomson, author of a book on French jihadists, told Al-Monitor.

“But you can’t say that the desire of some French men and women to join the jihad only comes from France’s failed model of assimilation,” he added, referring to France’s difficulties in integrating second and third generations of immigrants — mostly Muslims from the Maghreb — most of whom are still parked in projects and subject to discrimination.

“You also have young men and women who come from well-to-do families, you have converts and in that sense France is no different from the UK or Belgium,” Thomson said.

The greatest headache for security services is to profile would-be jihadists and thus stop them. France updated its counterterrorism legal arsenal in October, banning people suspected of involvement in jihadist activities from leaving the country for six months, renewable up to two years. The travel ban also includes the confiscation of their passport.

Since April, families have been encouraged to tell authorities about their children’s intent to leave for Syria or Iraq by calling a hotline or notifying the authorities on a website. The government says 625 jihadist hopefuls have been detected so far, though 100 had already left by the time their relatives called the hotline. Of the 625, 55% were converts, one-quarter were minors and 44% young girls.

“Typically, middle- and upper-class families tend to report their children, when they are showing signs of being at odds with society, when they seemed to have been brainwashed,” Dounia Bouzar told Al-Monitor.

The Interior Ministry has given Bouzar, a French anthropologist, the job of helping “de-radicalize” young adults and minors, most of whom are girls, still in France and recent converts — a term rejected by Bouzar, as she insists the 14- to 21-year-olds she deals with have been psychologically manipulated by deviant sects.

Bouzar noted that parents from poorer or Muslim backgrounds are afraid to report their children: “They think they could be further discriminated against or that their children could have a police record for life. They don’t trust government institutions.” She believes France still fails to differentiate between moderate Islam, as practiced by the great majority of French Muslims, and radical, extremist Islam. “French Muslims have been literally harassed for the past 10 years, all attention has been crystallized on the veil [France banned the headscarf in schools in 2004 and in government buildings in 2008], but I see judges who refuse to put a father under surveillance after he has banned music and toys at home, and sometimes even prevented his children from going to school!”

Detecting Islamic radicalization is the name of the game, and France should know better. “From our experience with French jihadists in Bosnia and Afghanistan, we know that one in nine jihadists will want to stage an attack when they come home,” said Jean-Charles Brisard, a French expert on terrorism.” Since August 2013, France’s security services have foiled five terrorist attacks and arrested their would-be perpetrators who had either trained in Syria or were planning on traveling there.

Close to 3,000 Europeans are believed to be fighting in Syria. Brisard said a European policy on tracking European Union-wide flight passenger data was essential. So far, the EU has refused to collect and share passenger name records, citing legal data protection concerns and costs.

Brisard also pointed out that preventing already radicalized, would-be jihadists from traveling to Syria or Iraq could prove problematic as shown in the case of the Canadian lone wolf who killed a soldier in Ottawa last month over his alleged frustration of not being able to travel to Syria. “What we need is to really focus on prevention,” Brisard told Al-Monitor. “Our politicians and security services have begun to understand that, but we could do more.” He cited the UK Charity Commission that provides ways of donating to support humanitarian efforts in Syria instead of going there. “France’s Muslim community also needs to offer counterarguments and lead the way in providing alternatives to jihad.”

In a Sept. 21 audio statement, IS called on its followers to kill civilians of countries that had joined the US-led coalition to fight the extremist group. The French got a special mention as prime targets and were described as “spiteful and filthy.” Days later, a group allegedly affiliated to IS beheaded a French tourist it had kidnapped in Algeria.

How about attacks in France?

“I’ve interviewed [French] jihadists [in Syria] whose dream is to kill French people and it is true that France has never been exposed to such a threat in terms of the numbers of people capable of perpetrating an attack on French soil,” when they return, said Thomson. “We are facing an unprecedented phenomenon, whereby jihad is at our door. It is so much easier to go to Syria via Turkey than it ever was to travel to Mali or Afghanistan. IS is actively recruiting Westerners, entire families, while it has always been more difficult to approach AQIM [Al-Qaeda in the Islamic Maghreb] for example,” added Thomson.

For Brisard, an attack on French soil is only a matter of time: “Jewish and Christian interests and government institutions are likely to be targeted. Attacks will be on a small scale, involving rudimentary techniques.” He mentioned Mehdi Nemmouche, the French jihadist who upon returning from Syria allegedly shot and killed four people in the Jewish Museum in Brussels in May.

As to why so many — young people, boys and girls, minors and adults, from so many different socioeconomic backgrounds, Muslim by birth or converts — want to join the jihad, so far no one has found an answer. This might be helpful in trying to dissuade them.