Israeli security experts warn that the Schengen Area — which allows Europeans to move freely around the continent — makes it easy for jihadists returning home from Syria or Iraq to move around and plan attacks. 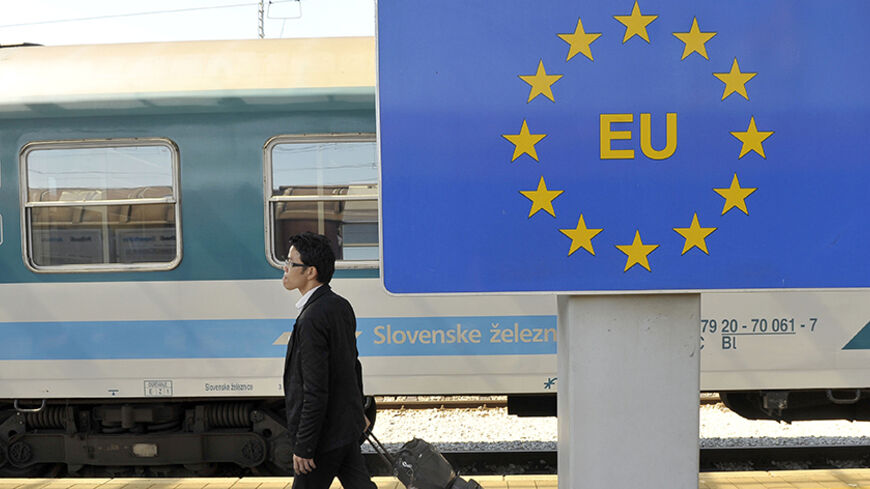 A passenger walks past a European Union sign at Slovenia's border crossing with Croatia in Dobova, June 15, 2011 - REUTERS/Srdjan Zivulovic

I've been going in and out of the European Union several times over the past few weeks, using a European passport I obtained several years ago. Each time, the border control agent took a cursory glance at the binding of my old-style passport, which has no biometric information, and handed it back to me quickly. It seems as if he didn’t bother to check or confirm a single detail in the document, which then allowed me to wander freely across the 28 countries that make up most of the European landmass.

This sense of “free movement” is particularly apparent when compared to parallel experiences at Israel’s Ben Gurion Airport. Every encounter I have with the border control police in Israel is accompanied by glances back and forth between my passport and me, steady typing into the computer and constant flipping between the pages. This procedure for entering the country is yet another layer in an intricate process of identification and prevention developed by Israel’s security apparatus. It is a long and sometimes arduous process of testing and deception that is an integral part of the battle of wits being waged with terrorist organizations.

The filtering and identifying techniques that Israel uses to prevent terrorist attacks on civil aviation and to keep terrorist operatives from entering its territory frequently provoke the ire of government agencies and human rights activists alike. They conclude that the procedures constitute a serious infringement of the individual’s basic civil rights. On the other hand, ever since the nations of the West in general and of the European Union in particular identified the potential threat posed by the “Islamic State’s Foreign Legion,” Israel has been receiving requests from intelligence agencies in those countries to share, study and implement the extensive know-how in this field, accumulated and developed here.

In the earliest phases of the Syrian civil war, Israeli intelligence noticed a growing movement of Muslims with an eschatological worldview, or jihadist mercenaries if you will, from Europe to sites where fighting was taking place.

Preachers and provocateurs active within the Muslim communities of the West identify those youngsters with a recruitment potential, and offer them an alluring alternative to a life of frustration and alienation in Europe. In most cases these are youths who feel shunned by society. Some of them are women or even minors under the age of 18, who find their way to Islamic State (IS) units in Iraq and Syria.

Sources in the Foreign Ministry in Jerusalem told Al-Monitor that Israel recognized the risk from the very beginning. They concluded that once these foreign fighters underwent training and exercises with IS, they would also pose a threat to Jewish and Israeli targets in Europe. That is why Israel invested so many resources in tracking them and initiated a dialogue regarding this issue with the governments of their countries of origin.

The most common route taken by these young people was, and still is, a regular international flight to Istanbul, where they meet representatives of the Islamist groups. These contacts have an easy time smuggling the new jihadists across Turkey’s long borders and stationing them where they are needed within fighting units in Syria or Iraq. This movement began with just a few individuals, but they soon became dozens, and their numbers continue to grow. According to the CIA’s most recent estimates in September 2014, IS alone now has over 2,000 “jihadist volunteers” from Western nations (mainly from Europe, but also from the United States, Australia and even New Zealand). According to some estimates, the number is twice as large.

One Israeli source who has dealt with this issue for a considerable length of time noted that Israel was quick to point out the problem to governments in the countries of origin of those volunteer fighters. It even went so far as to caution them to prepare for when those fighters return home. Israel warned that they would be trained, motivated and consumed by the ideology needed to carry out terror attacks. Furthermore, they would take advantage of the fact that as citizens in possessions of valid, legal passports, they would not be subjected to any process of investigation and filtering when they returned to Europe.

That was the precise path to mayhem and death taken by Mehdi Nemmouche, a son of immigrants, who holds French citizenship. He is suspected of carrying out the shooting attack at the Jewish Museum in Brussels that killed four people on May 24. Nemmouche had already served several prison terms for property crimes in France, and his family claims that it was in French prisons that he was exposed to jihadist ideology. Upon his release, he traveled to Turkey without raising any red flags among the French authorities. Once there he joined a convoy bringing humanitarian aid to Syria, and met up with IS fighters. French abductees who were recently released not only identified him, they also testified to instances of torture in which he was involved. After about a year in Syria, Nemmouche returned to the same continent where his journey had started. He showed his French passport to border control officials at Germany's Frankfurt airport and was then able to move freely throughout the European Union for more than two months. He traveled to Belgium, where he carried out his murderous mission, and then he went on to France, where he was caught only by chance.

Israeli sources working with the authorities in the various European states and in the EU headquarters in Brussels warn that while many intelligence agencies operate in the vast free-movement territory of the continent, there is no adequate mechanism for them to coordinate among themselves or share and transfer intelligence. Nonetheless, the problem isn’t limited to cooperation between member states of the EU. In some cases it exists within the individual countries themselves. One example of this is Germany, where Nemmouche landed upon his return from Syria. Sixteen intelligence agencies operate there, representing the 16 federal states that make up the Federal Republic of Germany. A diplomat involved in the details notes that Berlin is well aware of the threat that radical Islam poses to Germany, and the Federal Ministry of the Interior is taking steps to establish close mechanisms for cooperation internally. However, any steps that the interior minister in Angela Merkel’s government might want to take require the agreement of the 16 ministers of the interior representing each of the country’s federal states.

And that’s just Germany. People working in the EU offices in Brussels are fully aware that those jihadist fighters are a ticking time-bomb that threatens the entire continent. Gilles de Kerchove, the EU counterterrorism coordinator in Brussels, is now working to tighten intelligence ties between EU member states and to formulate procedures to increase oversight over who comes in and out of Europe, and even over movement within the continent.

According to the Israeli experts I spoke with, all of those moves require changes to the Schengen Agreement on freedom of movement, which is a source of much pride to so many Europeans. At the same time, it would also require legislative changes on such issues as eavesdropping, the arrest of suspects and searches. “What’s needed is a Schengen Agreement for intelligence,” a source in the Jerusalem Foreign Ministry told Al-Monitor.

While Israel already has an abundance of laws and restrictive orders against terrorism, even more moves were taken over the past few weeks to ease efforts to thwart IS ideology from penetrating the country. Defense Minister Moshe Ya’alon was quick to declare IS an illegal organization on Sept. 3, and Justice Minister Tzipi Livni proposed a law that would make membership in that group, even in Israel itself, a crime.

Europe operates much more slowly (even if the countries are acting in their own territory). A senior Israeli diplomat based in a major European capital attributes this to memories of the trauma of the Nazi regime and the dictatorships that followed it in the east and to the ensuing fear of granting too much power to the state, which would interfere with individual rights and freedoms.They understand the problem, they have the best intentions and they have a real desire to act, says one Israeli diplomat, but until the inevitable terrorist attack strikes at the heart of the EU, the necessary changes will be made at a snail’s pace. And in that time, the lines for people holding European passports at border controls in airports across the continent will continue to move quickly.