Why Salafists see Shiites as their greatest enemy

Many Salafists see Shiites, not Jews and Israel, as the greatest threat to Islam. 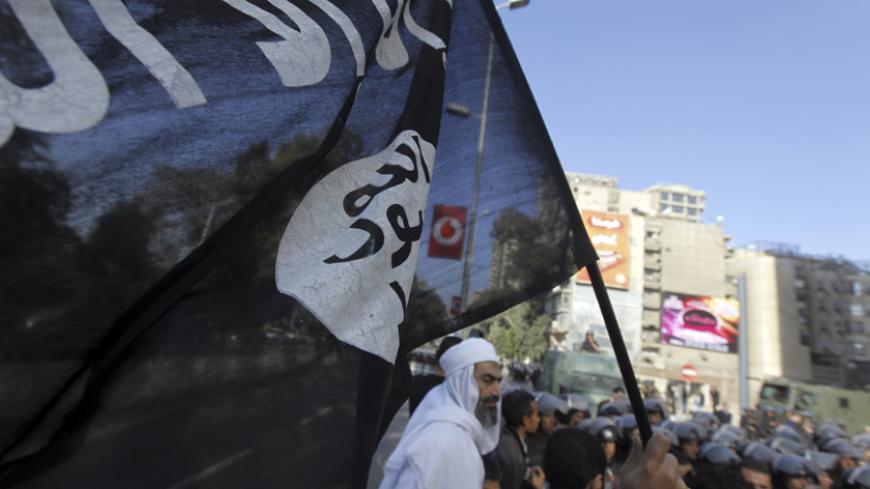 An Islamist protester holds a Salafist flag that reads, "There is no God but God and Muhammad is his prophet," as Egyptian security forces stand guard during a protest in Cairo, Jan. 18, 2013. - REUTERS/Amr Abdallah Dalsh

Helping Shiite groups in their military operations against Israel or the United States has always been a source of discord among Salafists. Radical Salafists consider both Shiites and Jews the enemies of Islam. But anti-Shiite enmity is often stronger than that against Jews among Salafists, who consider the Shiites a fifth column and thus see "damage" by Shiites as more serious than that caused by others.

In the latest chapter of this contentious relationship, a number of Salafist clerics praised the deaths of Shiite leaders in an Israeli airstrike on the Syrian Golan Heights on Jan. 18. Among the most prominent of these Salafist clerics is Mohammed al-Barrak, a professor at Umm al-Qura and a member of the Muslim Scholars Association in Saudi Arabia. He tweeted: “When the [Shiites] die at the hands of the Jews we thank God that he answered our prayers,” and “The damage inflicted by the [Shiites] on the Muslims is more than that inflicted by the Jews.” He also criticized Hamas for issuing a statement of condolence to the leadership of Hezbollah after the event. Barrak said that the statement “shows a theological deficiency within [Hamas], which is not fighting the Jews according to doctrine.” He asked Hamas’ leaders not to be courteous at the expense of doctrine and the community, adding, “No matter what the [Shiites] gave to Hamas, it does not justify appeasing them or supporting them.”

Comparing Shiites to Jews, Barrak said over Twitter: “Shiites are more harmful [to the Muslims] than the Jews because the [Shiites'] crimes in four years have exceeded all the Jews’ crimes in 60 years,” adding, “Shiites are the Muslims’ worst enemy because they are polytheists in terms of belief and religion and because their religion is creation of the Jews, making [the Shiites] worse enemies than the Western infidels or the Jews loyal to the State of Israel.”

Most Sunni radicals believe that Shiism emerged as a result of a Jewish infiltration by a legendary character named Ibn Sabaa. According to them, he was a Jew who falsely claimed to be Muslim in order to introduce Jewish beliefs to Islam and succeeded in forming the Shiite sect. According to the legend, the Shiites are considered a fifth column. The Shiites are thus blamed for the major defeats in the history of Islamic confrontation with the enemies of Islam — including the Crusades, the fall of the Abbasid Caliphate and the control by the Tatar armies over Islamic countries. Sunni historical texts include dozens of stories woven around the role of Shiites in those events.

This hard-line Salafist attitude is due to a doctrinal dispute among Salafists about the jurisprudential rule regarding cooperation with "misguided groups" such as the Shiites. Most Salafists, especially the radicals, contend that cooperating with Shiites is completely prohibited because the Shiites follow a "bidaa" (heretical belief), while the followers of other religions, such as Jews and Christians, don’t represent a bidaa position within the Islamic religion. Thus, a number of Salafist clerics, including Ibn Hanbal, issued a religious edict permitting the acceptance of help from "infidels" in cases where there is a benefit. However, he still ruled that it was forbidden to use the help of those who follow a bidaa, like the Shiites.

This hostile position against Shiites represents a principle that remains with the Salafists today. For example, Saudi Arabia’s former Grand Mufti Sheikh Abdul-Aziz bin Baz issued a religious edict at the time permitting the use of help from the Western alliance against Iraq in 1991. He deemed it permissible for Saudi Arabia to open its land to the alliance to carry out attacks from Saudi territory against Iraq. The Salafists have no objections to using unbelievers to kill an enemy that has usurped land. But bin Baz hesitated about whether it was right to cooperate with the Shiites against Israel by questioning the intentions of the Shiites.

Historically, the Sunni-Shiite relationship has been affected by majority-minority logic, whereby the Shiite minority tries to link itself to the general Islamic entity and thus gain the majority’s recognition as an equal. However, the majority has usually been suspicious and distrustful of the Shiites and considered them inferior.

Here appears one of the fundamental differences between the two fundamentalist currents in the Muslim world. There is ideological Salafism, which makes ideology a strict principle in dealing with politics and is often influenced by Wahhabi ideology. Then there is political fundamentalism, whose principles serve the groups' political goals. The Muslim Brotherhood and its extensions in the Middle East are of this second kind.

Political fundamentalism is somewhat politically pragmatic. Ideological Salafists oppose this pragmatism as incompatible with religious principles. This conflict reveals that the two sides disagree on the identity of the No. 1 enemy. While the likes of Hamas consider Israel the primary enemy, ideological Salafists believe that the Shiites are the most dangerous. This difference allows each party to ally with the enemy of its enemy when necessary. Just as Hamas accepts Iran’s help to fight Israel, ideological Salafists have no objections to allying, if necessary, with the Jews or Christians in fighting the Shiites.

This whole relationship shows that the history of religious conflicts among the sects in the region is still alive and active in the political world, and further paves the way for sectarian conflict to play a crucial role in the Middle East.