Rising incitement against Shiites by Salafist forces has prompted solidarity among the various sects of Shiite Islam. 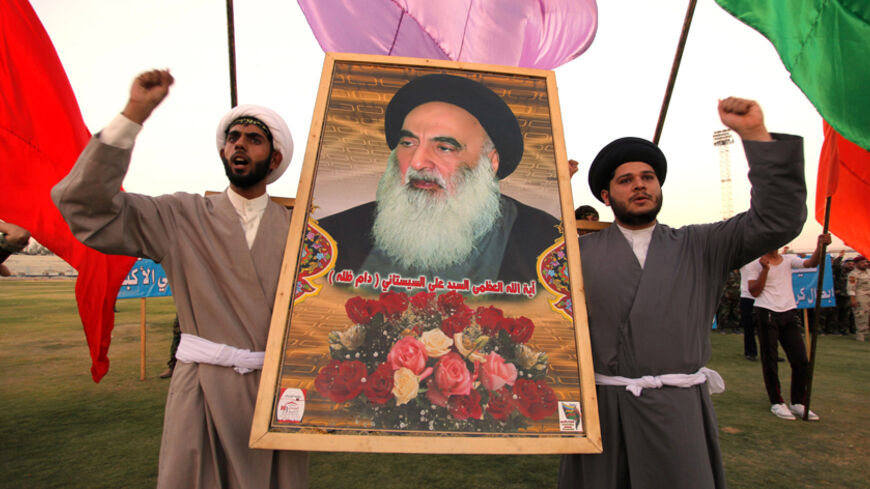 Shiite volunteers who have joined the Iraqi army to fight the Islamic State carry a picture of Grand Ayatollah Ali al-Sistani during a graduation ceremony after completing their field training in Najaf, Aug. 16, 2014. - REUTERS/Alaa Al-Marjani

Shiite Muslims are spread around the world, from the Indian subcontinent to the Arabian Peninsula and the Mediterranean region. They belong to various nationalities, have diverse cultures and sometimes even have different religious doctrines. Historically, they have never been under a single government nor have they enjoyed a single cohesive identity.

But the recent upsurge of anti-Shiite Salafist currents has made Shiites put their differences aside and align along one axis against a common threat.

The doctrinal differences among the various Shiite sub-sects have played a significant role in increasing the distance between them and has sometimes caused quarrels. Zaidi Shiites in Yemen almost completely split from Imami Twelver Shiites in other areas, meaning communication between them was cut off for centuries. Also, differences between the Usuli and Akhbari doctrines led to repeated conflicts in Iraq during the 18th century, sometimes involving violence and leaving casualties on both sides.

After the establishment of the Shiite Islamic regime in Iran, Shiite communities developed differences over such a political system and about the methods and approaches used by the regime’s founders. Religious leaders in Najaf have dissociated themselves from engaging and cooperating with the new Iranian regime because of doctrinal differences over the rightfulness of establishing a religious regime and over the violent methods that the regime sometimes uses.

There were also differences among a number of religious references (marja) in Qom and religious leaders in the new Islamic regime in Iran. The continuous differences between the various sides resulted in the emergence of different denominations of Shiism, manifested by the different approaches to politics between Iran and Najaf’s religious seminary, especially after 2003.

Sectarian conflicts in the region have led to the escalation of hatred against Shiites in recent years. There emerged dozens of satellite channels and Salafist religious figures calling for followers to fight Shiites and justifying the use of violence against them. The Islamic State (IS) has used the anti-Shiite incitement to launch a project to cleanse the Islamic world of Shiites. The policy of eradicating Shiites by killing them or expelling them from their areas has been a top IS priority throughout the group's existence, especially recently, as IS activity has escalated.

IS has dealt with Shiites as infidels, thus making their situation worse than that of the Christians and other "people of the book," and considered them even worse others, such as the Yazidis. IS does not give Shiites the choice to pay a religious tax and safely leave their areas or to convert to Sunni Islam. IS gives Shiites only one choice if they don’t escape: death. This is exactly what happened in Iraq’s Tal Afar in Ninevah province and in some Shiite-inhabited villages in Diyala and Salahuddin. This was the reason behind the long and difficult resistance waged by the people of Amerli against IS: They knew that they were facing certain death.

On the other hand, moderate Salafist religious figures did not come forward to condemn IS’ actions against Shiites in particular, despite having condemned IS actions against Sunnis and other wrongs. For example, in his latest religious edict, the mufti of Saudi Arabia, Abdul Aziz Al ash-Sheikh, only denounced IS for killing Muslims. However, he still calls Shiites "rafida" (those who reject), which means that they are outside the general framework of Islam. This means that IS killing Shiites is not being condemned or is given tacit approval.

In a similar position, prominent Egyptian cleric Sheikh Yusuf Qaradawi denounced IS’ declaration of an Islamic caliphate as illegitimate. But he didn’t mention the criminal acts that IS gangs are committing against Shiites.

This large gathering of hard-line Salafist forces against Shiites and the approving silence by other Salafist currents has led Shiites everywhere to feel a mounting sense of danger, causing them to put their internal differences aside and unite under a pan-Shiite identity to face the Salafist threat. Several indicators point to this Shiite cohesion, most notably the direct cooperation between the Iranian leadership and the Shiite marja, Ali al-Sistani, in forming the new Iraqi government.

On Sept. 9, Sistani’s official representative and agent in Iran, Sayyed Jawad al-Shahristani, visited Supreme Leader Ayatollah Ali Khamenei after his surgery. Shahristani conveyed Sistani’s greetings and wished Khamenei good health. Khamenei responded by sending his greetings to Sistani and asking God to preserve Sistani’s presence for the sake of Islam and all Muslims.

The event was unprecedented. In the past, both sides tried to keep a distance from each other and never communicated directly.

In another example, the great Shiite cleric Sheikh Wahid al-Khorasani in Qom, who is known for having poor relations with Khamenei, sent his son to visit Khamenei after the surgery. Khorasani used to leave Qom whenever Khamenei visited the place in order to avoid meeting him.

The region is witnessing a great Shiite awakening under the umbrella of a pan-Shiite identity, from Lebanon to Yemen, Iraq and Iran. This would not have happened if not for the blatant Salafist threat and violence against Shiites. While the Salafist project is failing in the region, it is nevertheless significantly contributing to advancing the project of its Shiite rivals.