Some in Jordan believe the government will not break its historical ties with the Muslim Brotherhood, while others say there will be a crackdown on the group to keep Gulf aid flowing into the kingdom. 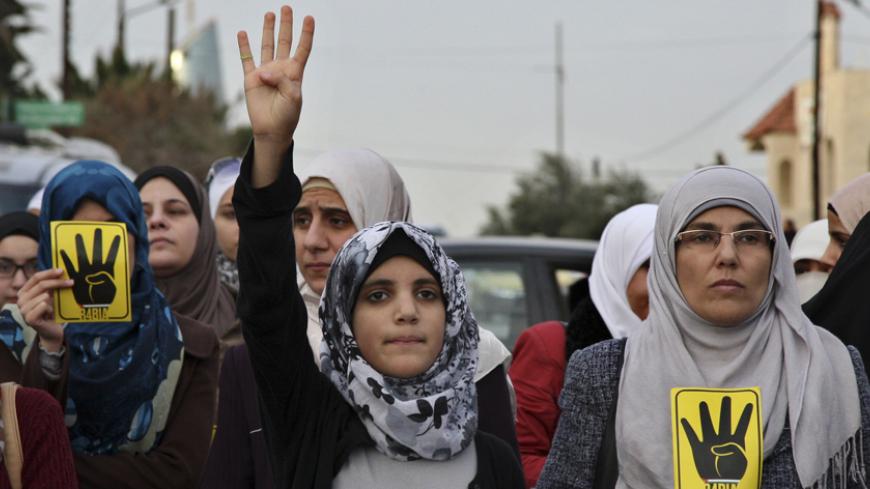 Jordanian Muslim Brotherhood protesters make the "four-fingered salute" during a protest against Egyptian Defense Minister Abdel Fattah al-Sisi as they mark the third anniversary of the Egyptian revolution, in front of the Egyptian Embassy in Amman, Jan. 25, 2014. - REUTERS/Majed Jaber

A correspondent in Jordan
February 3, 2015

AMMAN, Jordan — The Jordanian authorities arrested on Nov. 20 the local Muslim Brotherhood deputy leader Zaki Bani Arshid over a Facebook post in which he had attacked the United Arab Emirates' (UAE) decision to list his organization as a terrorist group. He is due to appear before the State Security Court for "disrupting relations with a foreign state," a terror charge according to the Anti-Terrorism Law.

In Jordan, like any other recipient of Gulf aid, a wide spectrum of political Islam followers are increasingly watched by authorities. The Muslim Brotherhood cautions about the rise of jihadists on the ashes of their criminalization, whereas the secular parties call for the reduction of the Islamist influence on education to counter extremism. Despite foreign pressures, the Brotherhood is not considered a terrorist organization in Jordan, and the kingdom is not likely to jeopardize its longstanding tacit alliance with the movement.

Like other opposition forces, the Muslim Brotherhood rejects the limits imposed on freedom of expression under the Anti-Terrorism Law, but it also underlines how double standards allegedly impinge on the charge of disrupting foreign relations, depending on what regional power is involved.

Hamza Mansur, a leading Muslim Brotherhood member and former secretary-general of the Islamic Action Front, told Al-Monitor, "There are double standards: The case of a Brotherhood member who criticized the UAE policies is referred to the State Security Court, while a well-known Jordanian journalist [Fahd al-Khitan] is allowed to describe a respectable figure like [Turkish President Recep Tayyip] Erdogan as 'suffering from delusions of grandeur,' even though he won fair democratic elections in a country like Turkey tied to us by economic interests."

Even though the spotlight is currently on the Brotherhood, it ought to be said that the charge of disrupting foreign relations has also been previously used against journalists who made fun of the Qatari leadership, the main sponsor of the Islamist movement.

The Jordanian authorities bluntly defend their actions by stressing the economic interests that bind the Hashemite Kingdom to the UAE.

A high-ranking official from the Ministry of Interior Affairs who requested anonymity told Al-Monitor, "If it were up to me, I would shoot Arshid! He endangered 225,000 Jordanians living in the Emirates. … Is he going to replace the remittances we receive from the UAE and feed the Jordanian people?"

In December 2011, the Gulf states decided to set up a $5 billion fund to support Jordan and deter unrest in a country that borders Saudi Arabia. Regardless of the undeniable weight of economic interests, activists condemn the interference of the Gulf monarchies as detrimental to the democratization of Jordan.

An activist from Amman told Al-Monitor on condition of anonymity, "The Gulf money bought the silence of the Jordanian streets. The same thing happened in Egypt, Yemen, Libya and Syria: The Gulf countries were scared of seeing their people imitating the Arab Spring of neighboring countries."

"It is similar to the way the US occupation bought the loyalty of the Iraqi tribes who joined the Sahwa," the activist added. The Iraqi Sahwa were an armed coalition of Sunni tribes set up under the US occupation to counter al-Qaeda.

In Egypt, Jordan and Palestine, the Brotherhood's rhetoric is centered on the faults of those who seize power, disregarding electoral outcomes. The movement is therefore convinced that counterterrorism is dangerous as long as it targets those Islamist groups who embraced parliamentarianism like them.

"Targeting Islamists on a world scale is dangerous, as it creates a fertile ground for terrorism," Mansur said, adding, "They target Islamists like us, who support peaceful transitions of power and don't call for the use of violence to achieve changes and reforms."

On the other hand, the Jordanian secular parties blame the Brotherhood itself for the decay of the education system and the consequent rise of religious fundamentalism.

"We need a ministerial reform of education to fight terrorism. Although important, the efforts of security agencies cannot achieve anything on their own," Abla Abu Alba, the first secretary of the Jordanian Democratic People's Party, told Al-Monitor. He added, "Let us not forget that the Muslim Brotherhood has been in control of the Ministry of Education for 17 years and this has resulted in the lack of scientific research."

Even though the Brotherhood leaders fear an escalation against them following the arrest of Arshid, the history of this group has been marked by a long tacit alliance with the kingdom.

"Until the lifting of martial law in 1991, the Brotherhood was the only political movement allowed to operate in the Jordanian civil society. It never called for the overthrow of the regime and served as an ally against the threat posed by communists, Baathists and Nasserists," said Mjriam Abu Samra, a doctoral researcher in international relations at the University of Oxford currently based in Amman.

"It also played a crucial role in quelling the unrest ensued by the increased living costs [in 1989] and the protests organized by the students of the University of Yarmuk against the rise of university fees [in 1984-86]," Abu Samra told Al-Monitor.

The historical relationship between the Brotherhood and the Jordanian regime prompted the secular parties to belittle the chances of a government-led war on the Islamist movement.

"The king no longer receives Muslim Brotherhood members," Abu Alba acknowledged. "They reiterated their aim to seize power completely, demanding the amendment of those constitutional articles related to the king's powers."

However, he said this did not matter. "But even in 1994, the government didn't break its ties with the Muslim Brotherhood and it will not break them now despite foreign pressures, as it is aware of the Brotherhood's social weight and its control over the biggest financial and economic institutions," Abu Alba said, referring to bodies such as the Islamic Charity Center Society.

"It will thus face restrictions without being persecuted like in Saudi Arabia or Egypt," he concluded.

In such a delicate situation, the best option for the Hashemite Kingdom seems to be a precarious balance between internal stability and foreign donors, placing its long-term hopes in the ongoing reconciliation between Qatar and the other Gulf countries. 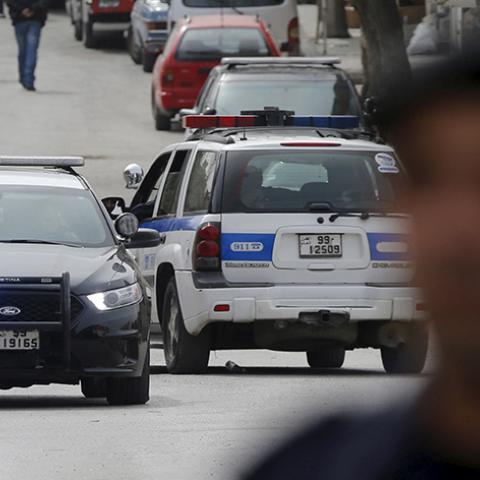