As negotiations with the Islamic State for a prisoner swap for Jordanian pilot Muath al-Kasasbeh falter, the Jordanian public is directing its anger against the kingdom’s decision to participate in the anti-IS coalition. 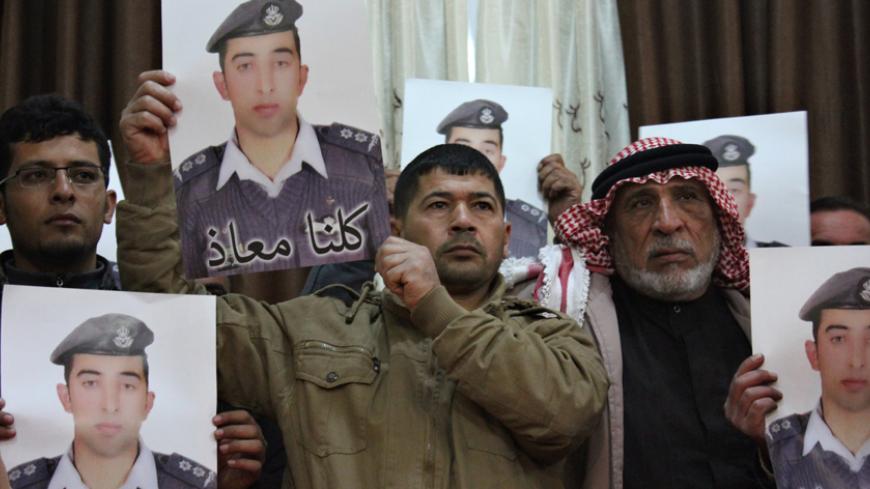 Relatives of Islamic State captive Jordanian pilot Muath al-Kasasbeh hold his poster as they take part in a rally in his support at the family's headquarters in the city of Karak, Jan. 31, 2015. - REUTERS

Jordanians are fearing the worst following the brutal murder of Japanese hostage Kenji Goto, whose killing by the Islamic State (IS) was aired in an online video late Jan. 31, two days after the deadline for a swap deal for his release. The fate of Goto was linked to Jordanian pilot Lt. Muath al-Kasasbeh, 26, held by IS since his F-16 crashed in Syria on Dec. 24. Hopes of recovering him alive in return for the release of convicted Iraqi terrorist Sajida al-Rishawi were dashed when the second deadline set by IS expired without a deal. Jordan had said it would exchange Rishawi, a failed suicide bomber involved in the November 2005 Amman hotel bombings, for Kasasbeh. IS had insisted that it will trade Goto for Rishawi, but that it would kill both hostages if the deal didn’t go through.

Despite Goto’s murder, Jordan’s armed forces insist they are still working on the release of Kasasbeh, although no details of the ongoing negotiations have been made public. On Jan. 28, before the first deadline, Jordan revealed that it would only release the Iraqi woman, who is on death row, in return for the Jordanian pilot, who was carrying out a mission on behalf of the US-led coalition against IS. Later that day, Minister of Foreign Affairs Nasser Joudeh tweeted that Jordan was waiting for proof that Kasasbeh was alive. The Jordanian pilot has not appeared in any IS video since his capture, raising fears about his well-being.

When news of Kasasbeh’s capture became public, the Islamist opposition and a number of deputies reiterated their objection to Jordan’s decision to join the anti-IS coalition. King Abdullah defended his position and insisted on a number of occasions that this was "our war” and that Jordan had to be in the forefront in the fight against extremism.

Since Kasasbeh was taken hostage, Jordanians have united in backing efforts to set him free. The government never confirmed the rumors, but it is believed that back-channel negotiations for Kasasbeh’s release were conducted through intermediaries.

The fate of Kasasbeh will have a direct effect on public opinion regarding Jordan’s participation in the international coalition. If Kasasbeh is killed, his death will trigger a wave of anger and frustration and may spark a political crisis. It will strengthen the position of those who believe Jordan should withdraw from the fight against IS. On Jan. 28, relatives and supporters of Kasasbeh held a protest in Amman and a few shouted anti-government and anti-regime slogans in a sign of how divisive this issue had become, especially for the pilot’s large tribe in southern Jordan.

Kasasbeh’s father was quoted by CNN Arabic as saying, “He had no business with the coalition, and those who had sent my son to fight beyond Jordan’s border must now bring him back.” The incident prompted the king to meet with Kasasbeh’s parents and to assure them that everything possible was being done for his safe return.

Interestingly, public opinion has been in favor of securing an exchange deal with IS. When Jordan's ambassador in Libya, Fawaz al-Ittan, was kidnapped by an extremist group last April, Jordanians applauded his eventual release in a swap that freed a convicted Libyan terrorist serving a life sentence in Jordan.

The latest crisis has tested Jordan’s relations with Japan — a major donor for the kingdom — whose Prime Minister Shinzo Abe had asked the Amman government to cooperate in the release of the Japanese hostage. Jordan’s offer to exchange Kasasbeh for Rishawi made no mention of Goto.

The proposed swap may also strain relations between Amman and Washington after a Pentagon official refused to consider Kasasbeh a prisoner of war. Pentagon Press Secretary Rear Adm. John Kirby said Jan. 28 that the US swap of five senior Taliban commanders held at Guantanamo Bay for Army Sgt. Bowe Bergdahl was different from the “hostage situation” involving the Jordanian pilot. A growing number of Jordanians believe that the United States has done little to support Jordan through this latest crisis.

Newspaper columnists have lauded the government’s position and called on Jordanians to rally behind their leadership and armed forces. But a former minister who asked not to be named told Al-Monitor that the Kasasbeh affair has become the most serious challenge to the regime in more than a decade, saying, “It will test public opinion and give credence to those arguing against Jordan’s involvement in the international coalition.”

Jordanian researcher on Islamist movements Hassan Abu Hanyieh told Al-Monitor that IS was trying to polarize Jordanian society, especially the tribes, often considered the backbone of the regime. He said, “They wanted to create controversy, and they succeeded.”

So far, Jordanians are united in their support for the release of Kasasbeh. But IS' failure to prove that the pilot is alive has dampened hopes for his safe return, prompting some to call over social media for the execution of all IS prisoners in Jordan, starting with Rishawi. Others, including Abu Hanyieh, have argued that IS is waging a psychological war against Jordan and that its reluctance to provide proof of life is intended to fracture national unity and weaken the nation’s resolve. One thing is clear: The emotional strain of the past few days has tested both groups.