The popular mobilization forces in Iraq have made positive contributions to the fight against the Islamic State, but allegations of killings require that they be brought under the government's security umbrella. 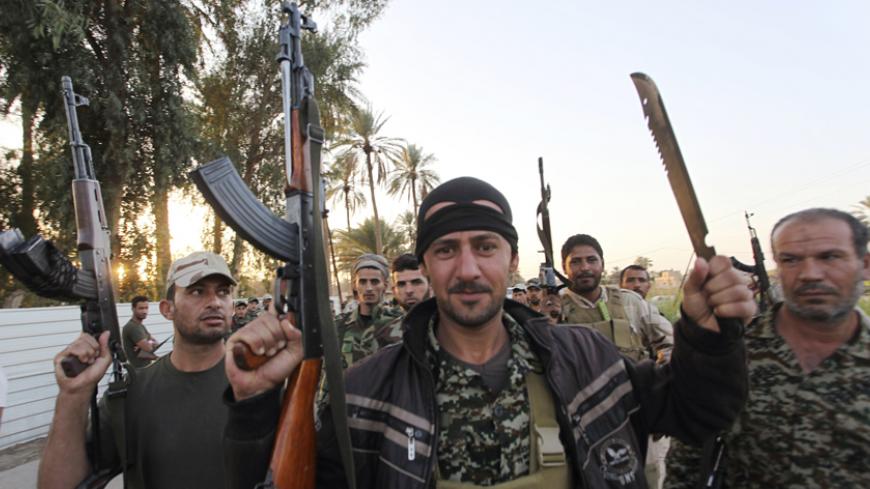 The popular mobilization forces have been widely controversial in Iraq since their inception in June 2014. Public opinion has focused on the legitimacy of these irregular forces, their activities and the possible illegal killings committed by them in the fight against the Islamic State (IS). In light of the dire need for these forces in the ongoing conflict on the one hand, and lapses in disciplined behavior among their ranks on the other, Iraqis remain conflicted about them.

Reports occasionally appear about violations and abuses by the mobilization forces on the battlefield and off it. At the same time, however, one cannot deny their contribution to hindering IS’ progress toward the central and southern areas of the country. In addition, the forces have also recently made offensive advances against IS, improving their reputation in the public's eye and in the Iraqi political arena.

The popular mobilization forces were formed after Grand Ayatollah Ali al-Sistani issued a fatwa calling on all those able to take up arms and volunteer in the security forces in the fight against IS. The forces were to fall under the umbrella of the state’s security services and within its legal frameworks and practices. In the course of events, however, some of these groups embarked on a different path, operating independently, outside judicial and governmental monitoring and supervision, somewhat along the lines of Iran’s Basij, which were founded in 1979 at the directive of Supreme Leader Ayatollah Ruhollah Khomeini.

One thing that distinguishes Iraq's popular mobilization forces from its army units is their deep willingness to fight and to sacrifice to achieve military objectives against the enemy. They do not, however, have the professional and military training of the official forces and are not being held accountable in instances of violations.

The popular mobilization forces are in part reconstitutions of the militias formed after the US-led invasion and occupation of Iraq that fought against US troops and were often supported by Iran. Some of the groups formed independently and later gained Iranian backing, such as the Mahdi Army, which is affiliated with Shiite cleric Muqtada al-Sadr. Other groups were initially formed under Iranian supervision, such as the Badr Organization, Hezbollah in Iraq and Jaysh al-Mukhtar.

These forces expanded with the enrollment of large numbers of volunteers, especially following the fall of Mosul in June 2014. Their relations with Iran grew stronger as they began to operate under Iranian military guidance. Their close ties to Iran stem in part from an ideological kinship, but also from the militias' lack of trust in the fighting skills of the Iraqi army, which failed to protect Mosul and has suffered significant subsequent defeats.

Sectarianism in Iraq has fueled resentment toward the popular forces. While some violations against civilians have been attributed to IS, others have accused the popular mobilization forces of committing them. The most prominent such incident was the August 2104 attack on the Musab bin Umair Mosque in Diyala that left nearly 70 Sunni civilians dead.

Also in Diyala province in the last week of January, an assault was reported to have resulted in more than 70 civilians being killed, including women and children. Dozens of people have also been kidnapped. The media office of the popular mobilization forces in Diyala has issued official denials of responsibility for these killings, instead blaming IS and calling for a comprehensive judicial investigation into the matter.

Sistani's spokesman Ahmed al-Safi has also called for investigations and for firm measures to be taken against the perpetrators to deter similar incidents in the future. Prime Minister Haider al-Abadi has announced the formation of a committee to investigate the matter, charging that the perpetrators of such crimes are “outlaws serving specific agendas” seeking to divide Iraq.

Areas of Baghdad have not been immune to the alleged transgressions of the popular mobilization forces. Clashes erupted Jan. 31 in the Karrada district between Hezbollah brigades and fighters affiliated with other popular forces after disagreements following the kidnapping of the brigades’ secretary-general, Abbas al-Mohammedawi, by unknown parties.

That same day, Abadi declared five regions in Baghdad — Adhamiya, Karrada, Khadimiya, Mansour and Saydiya — demilitarized zones in an attempt to reduce violence in the capital. He also lifted the nighttime curfew that had been imposed for years on different areas of Baghdad.

Another measure that should be taken is bringing the popular mobilization forces under government control alongside the Iraqi army. This would help prevent illegal and irresponsible behavior and allow direct judicial action against violators, eliminating the need to form investigative committees after every alleged crime or incident. In light of the struggle with IS, Iraqis are not yet willing to dissolve the irregular forces, but further indiscriminate acts of violence could further deepen the sectarian divide and strengthen IS, which feeds and thrives on such divisions.