The phenomenon of clerics joining Iraq’s Popular Mobilization Units to fight the Islamic State, while deemed beneficial by many, remains controversial. 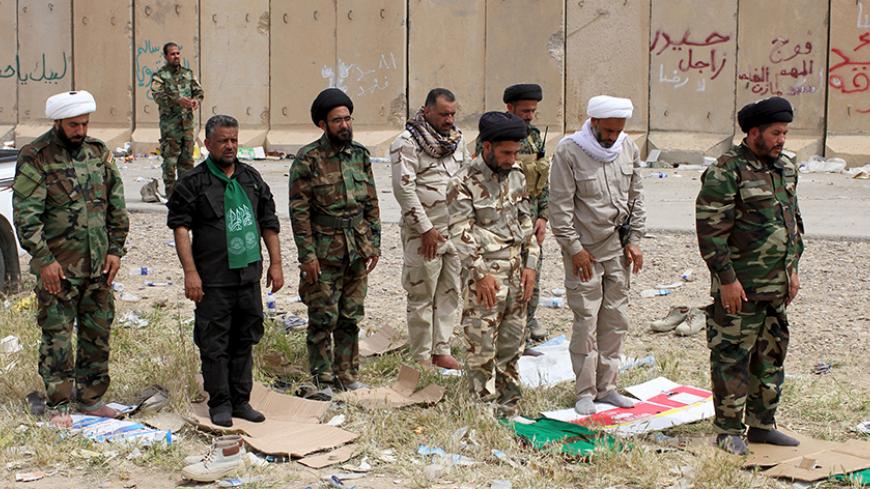 After Mosul fell to the Islamic State (IS) on June 10, 2014, and the latter continued its advance toward Baghdad, Iraq’s Shiite Grand Ayatollah Ali al-Sistani issued a statement June 13, calling on all Iraqis to join the front in support of the Iraqi armed forces.

As a result, volunteers were organized into military units that later became known as the Popular Mobilization Units, which included a number of religious seminary students and teachers from Najaf, who joined the fight wearing their religious garb.

Those clerics performed a number of tasks, as they took part in military operations and provided ideological and spiritual support to their fellow combatants, while ensuring that the behavior of fighters remained in line with the morality of religious edicts, and precluded the commission of violations and unacceptable conduct.

Moreover, in February, Sistani issued a set of instructions to those engaged in fighting against IS, including a number of moral and humanitarian guidelines on how to treat enemy troops, prisoners and civilians on the battlefield. From this point of view, the presence of clerics among volunteer forces was considered highly important, as it served to maintain social order and monitored the combatants’ commitment to moral conduct in battle, particularly in a context where Iraqi judicial institutions are extremely weak and have lost their authority over many aspects of public life, including the military.

The Popular Mobilization Units are ideologically and religiously motivated in their fight against IS, which is considered to be key in their success when compared to the Iraqi army that withdrew — without really fighting — from Mosul, Ramadi and other regions, as a result of its lack of a strong military doctrine. In that context, the presence of clerics in the ranks of the Popular Mobilization Units gained importance, as they provided spiritual and ideological support to the combatants among them.

Al-Monitor met with Sijad al-Rabihi, a student at the Najaf hawza (seminary), who joined the Popular Mobilization Units. He described as “very varied” the roles played by clerics within the units, with some of them even commanding military regiments in combat operations, as well as being embedded with almost all types of troops.

When asked who those clerics are religiously affiliated with, Rabihi told Al-Monitor, “Most volunteer clerics view Sistani as their supreme authority and obey the latter’s orders; while others, in groups allied with Iran — such as the Badr Organization and Hezbollah Battalions — pledge allegiance to Iranian Supreme Leader [Ayatollah] Ali Khamenei.”

Rabihi said that clerics who volunteer with the Popular Mobilization Units come from a variety of backgrounds and religious study levels: from the highest, to intermediate and beginner seminary levels, which indicates that the phenomenon of clerics joining the fight against IS has garnered popularity among all segments of religious students in Najaf.

Combatant clerics among the Popular Mobilization Units often wear their religious garb on top of which they don a military uniform while covering their heads with the black or white turban that denotes their religious rank. This composite uniform allows them to fight while maintaining their moral and spiritual influence on the rest of the troops.

Despite the positive attributes embodied by the combatant clerics, there are negative aspects to the sectarian dimension of their presence on the ground, which gives a general impression that the forces engaged in fighting against IS are solely Shiites opposed to Sunni militants. But this stereotypical view is neither accurate nor objective; there are Sunni forces that fight with the Iraqi army, in addition to the Sunni clans' special units that are part of the Popular Mobilization Units. In that context, IS is but a very small minority in the larger Sunni constituency, mainly comprised of civilians harmed by IS’ invasion of their lands, who yearn for the liberation of those lands by the Iraqi army.

To mitigate any problems arising from the presence of Shiite clerics, their Sunni counterparts must be encouraged to play a similar role within the Sunni forces of the Popular Mobilization Units, and give those troops spiritual support, as well as establish a semblance of balance in the public image of the units, whereby they are no longer viewed as being purely Shiite in nature.

Such a move can be achieved through actions on the part of Sunni religious authorities aimed at encouraging Iraqi Sunni clerics to join the combatants, as well as offer them support and coordinate with official military institutions to facilitate their inclusion in Sunni fighting units and their participation in combat operations. Such a move, in turn, would encourage larger numbers of Sunni volunteers to join the troops engaged in the fight against IS.

On the other hand, it has become necessary to administratively reorganize and supervise the groups of Shiite clerics participating in combat operations, all to prevent them from carrying out any sectarian incitement or interference in the military and security affairs of official institutions. Such a goal can be attained by entrusting the Shiite Waqf (Endowment) with the task of monitoring, supervising and administratively organizing clerics who volunteered to fight against IS.

It is evident that the phenomenon of having clerics on the front lines is a double-edged sword. While it can help improve the conduct of combatants, if left without proper supervision, it may mutate into a new factor that further inflames sectarian tensions.