Massoud Barzani, president of the Kurdistan Regional Government, has decided to stay close to the battlefield around Mosul Dam in northern Iraq to direct operations and encourage peshmerga fighters. 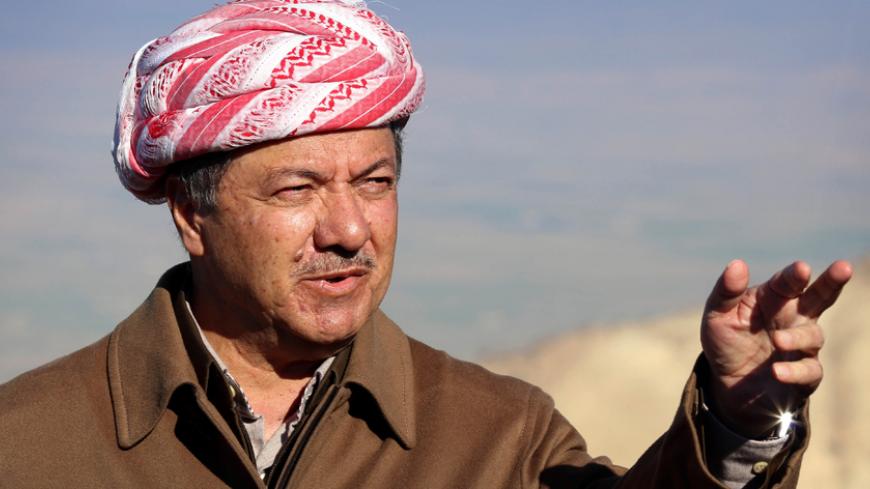 MOSUL DAM, Iraq — Near the Mosul Dam, at the foot of a mountain only 1 kilometer (0.6 miles) from the battle raging between the peshmerga forces and the Islamic State (IS), Kurdistan Regional Government President Massoud Barzani leads the battle from a simple caravan that is the closest point a military commander could get to his soldiers.

Barzani has left his political tasks in Erbil for the government to handle and decided to join the battle. His visitors are advised to wear heavy clothing, given the absence of a heating system at the Kurdish leader’s new headquarters. Barzani’s escorts told Al-Monitor that he was used to the cold since he hails from that environment. Barzani and his father, Mullah Mustafa Barzani, the leader of the Kurdish revolutionary movement, lived more difficult conditions in the remote mountains of northern Iraq when they led the fight against the regime of Saddam Hussein.

The geographical overlap is obvious in the northern area of Mosul, where the Mosul Dam is located, which was liberated in August 2014 by the peshmerga forces with the support of the international coalition air force. Peshmerga fighters provide their visitors with a telescope to watch the movement of IS fighters in villages sheltered by the mountains, the Tigris River and the vast farmland that allows them to move and create overlapping demarcation lines.

While he pointed out the movement of IS fighters at the bottom of a mountain, a peshmerga leader in the Mosul Dam area told Al-Monitor, “Complete victory over IS is possible in Mosul, but the difficulty lies in protecting the land once liberated. When the peshmerga forces liberated land that IS had seized over the past months, they had to rely on local landowners to protect the land, which was sufficient to provide human capacity and military capabilities to advance to new areas. However, expanding that area requires more preparations on the ground.”

Officers in the peshmerga operations command told Al-Monitor that air cover by the US Apache helicopters has the potential to provide substantial support for the battle to liberate Mosul. The officers said that land battles are more in need of air support from helicopter gunships than airstrikes, despite the importance of these strikes and their contribution to having changed the balance of the battle against IS until now.

Barzani, whose sons and a number of peshmerga fighters accompany him to the operational headquarters in the Mosul Dam area, often wanders along the demarcation lines with IS. People close to him said that the liberation of the Sinjar area — in which Barzani himself was involved — witnessed distinct stages, including a desperate attempt on the part of IS fighters to target Barzani with a car bomb. However, the bomb was detonated by the peshmerga before the car reached its destination, according to the same sources.

The presence of Barzani himself on the battlefield has a crucial impact on the soldiers. Some of the soldiers interviewed by Al-Monitor spoke about the critical field decisions taken by Barzani that were based on his long experience in similar battles. Those decisions would not have been taken had the decision-makers not been close to the constantly changing battlefield.

The insistence of a leader of Barzani’s caliber on being present in the battlefield, within walking distance of the fighting, explains why many political and military leaders have made similar moves. It also explains why many senior peshmerga leaders have died in battle when fighting alongside their soldiers — for instance, in the case of the Popular Mobilization Forces in the provinces of Diyala and Salahuddin.

Despite the seriousness of the current situation, the presence of Barzani and other leaders in the field is a positive step as it fills the large gap between soldiers and military leaders. It should be noted that many Iraqis agree that the distance between forces and leaders was one of the mistakes that led to IS’ rapid expansion in Iraqi cities and the subsequent collapse in the ranks of both the Iraqi army and the peshmerga forces over the past months.