Ankara could face a nationalist backlash at home for favoring the Kurds over the Turkmens in Iraq. 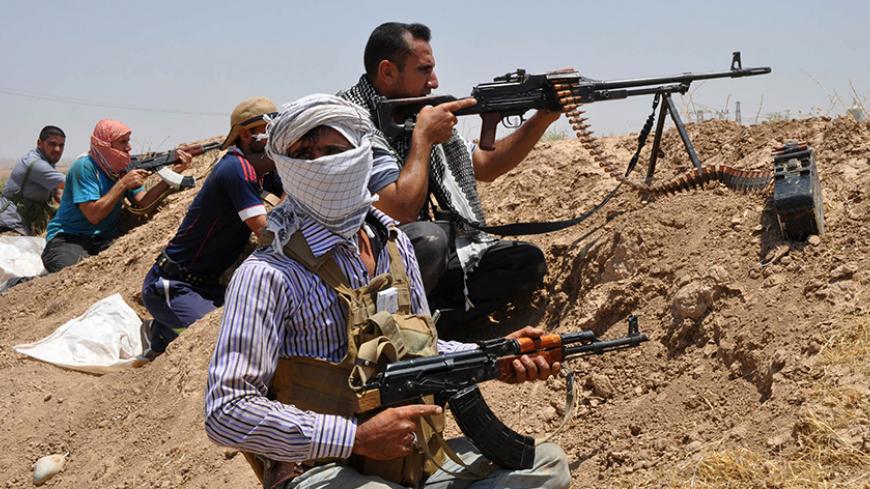 Iraqi Turkmen fighters take part in an intensive security deployment in the town of Taza, south of the northern oil city of Kirkuk, June 19, 2014. - REUTERS

For some time, Turkey's attention has been concentrated on the plight of Syrian Turkmens as they fight the Assad regime and the Islamic State, while pleas from Iraqi Turkmens have largely fallen on deaf ears in Ankara. This discrepancy was made apparent after Iraqi Turkmen leaders recently complained of what they claim are the expansionist aims of the Iraqi Kurds at the expense of the Turkmens.

This indifference to the Iraqi Turkmens, is likely, however, to cause fresh headaches down the line for the government of Turkish Prime Minister Ahmet Davutoglu, accused of using the Iraq and Syrian Turkmens willy-nilly to advance its own agenda.

Iraqi Turkmen leaders are now claiming that the Kurdistan Regional Government is using the war against IS to expand its borders in northern Iraq. They say the KRG’s plans also include taking control of the oil-rich city of Kirkuk.

Turkmen leaders accused the KRG last week of digging a long trench along the front line in the battle against IS, which they claim is actually a demarcation line indicating the lands it wants to wrest from Baghdad.

"We see this move to dig a trench as suspicious," Ersad Salihi, the head of the Iraqi Turkmen Front (ITF), told Agence France-Presse. "It starts in Rabia … and ends in Khanaqin," he said, referring to a northwestern town near the Syrian border and a city 400 kilometers (250 miles) away in the southeast near the Iranian border.

In a separate interview with Hurriyet, Salihi said Kirkuk has also been surrounded by trenches and that 80% of the lands where the Turkmens live have been added to territory controlled by the KRG.

Majed al-Gharawi, a member of the Iraqi parliament’s Defense and Security Commission, also believes that the Kurds are preparing to realize their ultimate dream of an independent Kurdistan, and have started drawing their borders.

“The government of [Iraqi Prime Minister] Haider al-Abadi is busy fighting IS and therefore unable to open a front against the Kurds as they dig these trenches,” Gharawi was quoted as saying by the Turkish daily Yeni Yuzyil.

Due to the central government’s inability to provide sufficient protection, Kirkuk is currently under de facto KRG control and guarded by Kurdish peshmerga fighters. It has, however, been a longstanding ambition of the Kurds to take official control of the city.

Salihi told Hurriyet that the trenches being dug by the KRG were now progressing toward the town of Tuz Khormato, 88 kilometers (55 miles) south of Kirkuk, a potential flashpoint between Turkmens and Kurds.

The town witnessed intercommunal violence in November due to a dispute over a checkpoint. While the risk of further violence appears to have receded for now, divisions between the town’s Kurdish and Turkmen communities are said to be sharper than ever.

Spurred on by domestic nationalist sentiments, Ankara had long opposed the territorial ambitions of the Iraqi Kurds. It had also argued that Kirkuk is a historically Turkmen city, and that its demography was tampered with under Saddam Hussein, and later by the Kurds, does not alter this fact.

Ankara also opposed the idea of a referendum on Kirkuk’s future status, arguing that the KRG had moved in Kurds from elsewhere to bolster the claim that the city is predominantly Kurdish.

Ankara even suggested at one time that for the Kurds to grab Kirkuk would be cause for war. This approach was also in line with Turkish irredentism, according to which Kirkuk and Mosul rightly belong to Turkey, from which they were torn away unjustly by the victorious powers after World War I.

Developments in Iraq and Syria have, however, changed Ankara’s calculus with regard to the Turkmens in both countries, leaving the Davutoglu government facing charges of cynically using the Turkmens and later deserting and abandoning them in difficult situations.

Suha Umar, who knows the region well, having served in Jordan as ambassador in 1995-1998, is among those who believe that the Turkmens were used to promote the interests of the ruling Justice and Development Party (AKP) rather than Turkey’s national interests.

“The AKP went into this Turkmen business for its own political interests, much of which had to do with oil,” Umar told Al-Monitor. He said the situation changed fundamentally after Ankara started developing close ties with the KRG, especially in the strategic energy field.

“Circumstances have changed and Ankara today relies on Barzani’s support in the region. It is therefore not in a position to object to what the KRG is doing,” Umar said. He was referring to KRG President Massoud Barzani, who has also established warm ties with President Recep Tayyip Erdogan.

Umar argued that the Syrian Turkmens were also being used by Ankara now, especially with regard to the transportation of illicit oil from Syria.

Many recall that until the Syrian crisis, Ankara did not even have a policy with regard to the Syrian Turkmens, presumably not to anger the Assad regime it had developed good ties with prior to 2011. Erdogan, who was prime minister at the time, and President Bashar al-Assad often referred to each other as “brother” then.

The focus at that stage was on Iraqi Turkmens based in Kirkuk and operating under the ITF banner. The ITF was supported by the Turkish state (some argue it was established by Turkey) to block the political ambitions of Iraqi Kurds in the oil-rich city, among other objectives. Times have changed radically since those days, though, and Turkey and the KRG are close allies today, following a historic about-turn by Ankara that left the startled Turkmens in the cold.

As a sign of these close ties, Barzani was almost alone in supporting Turkey recently, after Baghdad — with US support — objected to the deployment of Turkish special forces in the town of Bashiqa near Mosul, and called for them to be withdrawn from Iraq. Tellingly, the few that were “withdrawn” were sent to regions controlled by the KRG.

Ankara’s apparent indifference to the pleas of the Turkmens in Kirkuk has also fueled speculation that it has reconciled itself to the fact that this city will most likely remain in Kurdish hands. Al-Monitor’s Fehim Tastekin reported recently that the Iraqi Turkmens are also blaming Turkey for the fall of Mosul to IS in 2014.

The Davutoglu government is also under fire from the opposition in Turkey, accused of preparing the groundwork for Sunni Kurds to be the major stakeholder, not just in Kirkuk but also in Mosul after it is liberated from IS.

Ozturk Yilmaz, a deputy from the main opposition Republican People's Party, criticized the government for attempting to silently deploy extra forces in Bashiqa, where some Turkish troops have been training peshmerga and local Sunni fighters against IS.

“Why did these soldiers go there? What was their aim? Are 600 soldiers going to save Mosul? Are we going to liberate Mosul with our own hands only to hand it over to someone else?” Yilmaz asked during an address to parliament in December, indicating that it was not clear what the government’s strategy was.

Yilmaz’s remarks were especially significant since he was Turkey’s consul general in Mosul when it fell to IS in 2014, and was held hostage with his staff by the group for 101 days.

It is not clear how the Davutoglu government plans to extricate itself from this situation; it would need to appease the Iraqi Turkmens, in order to also avoid a nationalist backlash at home, while not harming its ties with the KRG.

The picture should become clearer after the battle to liberate Mosul begins in earnest and the role Turkey plays in it comes into better focus.