Past events in US-Iraqi relations and the prevalence of conspiracy theories spread by the media as well as politicians have led Iraqis to doubt the sincerity of the US fight against the Islamic State. 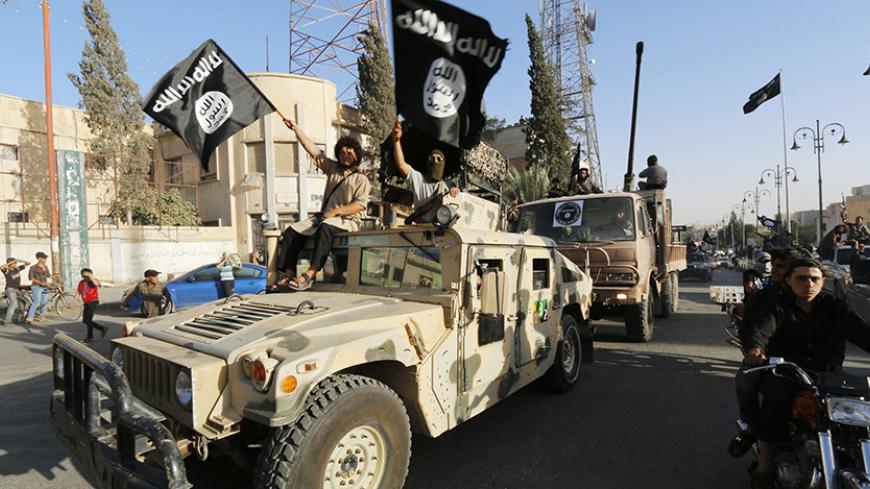 Mohammad Ali Ahmad, a newspaper vendor in Baghdad, expressed shock at some people’s belief that the United States will eliminate the Islamic State (IS). During a phone interview with Al-Monitor, Ahmad said that the United States had created IS and would not allow it to be destroyed. This belief is widespread among many Iraqis and other Arabs and is being reinforced by Iraqi and Arab media, which claim that the CIA was behind IS' establishment.

It is not only average Iraqi citizens who believe this, but politicians and journalists as well. A case in point is a website close to former Prime Minister Nouri al-Maliki publishing a detailed article about a US-led conspiracy to create IS to deal blows to any government opposing Israel’s global policies and its own. Alforat satellite television, affiliated with the Islamic Supreme Council and opposed to Maliki’s politics, is on the same page. Since July 2014, it has been broadcasting stories claiming that the United States formed IS to weaken certain states and to gain control over them.

Some note what they claim to be a clear contradiction in the United States' proclaimed stance toward IS. On the one hand, they see it fighting IS on the ground, but on the other hand, supplying it with arms. This is largely based on the October 2014 incident in which the US-led international coalition against IS airdropped weapons to Kurdish peshmerga and one of the loads fell into IS hands. The US Department of Defense acknowledged the incident, saying that the wind likely blew the delivery off course. On Feb. 4, Maliki’s State of Law Coalition called on the parliament to launch an investigation into alleged repeated US arms supply to IS.

In a phone interview from Diwaniyah, Hamza Fadel Youcef, professor of modern literary criticism at al-Qadisiyyah University, told Al-Monitor of a theory popular in his city involving an alleged Operation Hornet’s Nest undertaken by the international coalition. Youcef explained, “People believe that the US strikes IS in a certain region to eliminate its militants and allows the Shiite popular mobilization forces to enter the area. Then, the United States encourages IS to occupy the region again to eliminate the Shiite militants only to strike IS once again. Such a scenario ultimately leads to killing the biggest number of militants from both sides.”

According to Youcef, people believe this scenario because of stories told by members of the popular mobilization forces who participated in battles against IS. They claim that the United States abandons them as soon as they liberate regions from IS control. This allows the IS militants to regroup, like a hornet’s nest, and reoccupy the liberated region, and then the United States attacks them once again.

The doubts about the US effort to eliminate IS have several roots. The omnipresent Israeli-Palestinian conflict is one of them. Iraqis, like their fellow Arabs, feel that the United States has consistently favored Israeli interests over Arab interests for more than six decades. As a result, Arabs' trust in US support for them has been shaken.

Iraqis alone have two other reasons to doubt the sincerity of the United States. They recall that in 1991 President George H.W. Bush encouraged them to revolt against Saddam Hussein’s regime, but when Iraqis staged a popular uprising, the United States abandoned them, allowing Saddam’s forces to quash the revolution, eliminate the rebels and bury them in mass graves. Youcef said that many residents from his city cannot forgive the United States for this episode and cannot trust its proclaimed intention to rescue them from terrorism based on its track record against dictatorship.

The other reason consolidating this belief among Iraqis relates to the situation in the wake of the 2003 US-led invasion. Iraqis do not believe that it was a coincidence that terrorism and chaos gripped the country for the next 10 years. They think it was a US-planned project. Such interpretations are easily found in the Iraqi media. Al-Bayyna al-Jadid constantly publishes claims that US aircraft drop weapons and ammunition to IS. Al-Mothaqaf, a news website, has discussed this in a detailed study on its home page. It also cites denials by the US secretary of defense and Iraqi Prime Minister Haider al-Abadi regarding these claims, but concludes nonetheless that the United States is indeed providing IS with arms.

Given the reasons fueling Iraqis' doubts about US promises to fight terrorism and reconstruct the country, the longer the war on terror continues, the more their doubts will increase.