Despite claims by conservative media outlets, President Hassan Rouhani's administration has not closed Iran's space program but returned its direction to the original ministry. 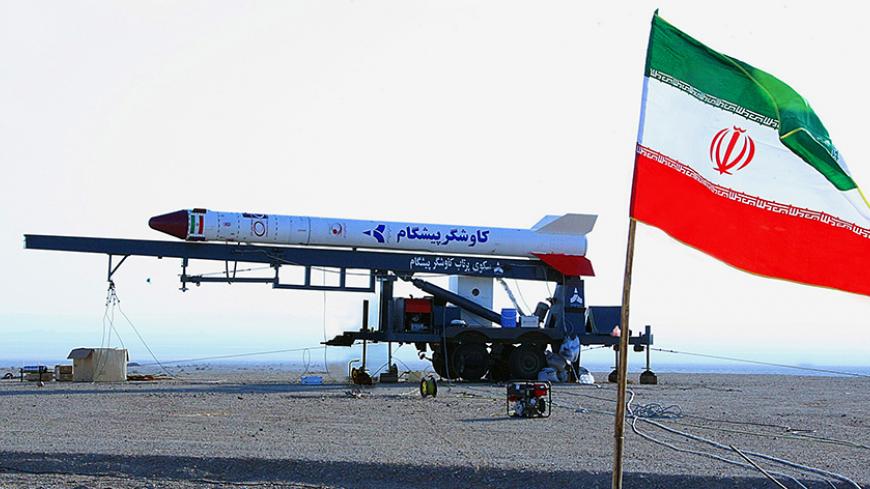 The Iranian flag flutters in front of a capsule containing a live monkey, which Iranian news agencies said returned alive after traveling to an altitude of 120 kilometers (75 miles) for a suborbital flight, Jan. 28, 2013. - Getty Images
Arash Karami
@@thekarami
February 5, 2015

On Jan. 11, a number of conservative media outlets reported that President Hassan Rouhani had closed down a significant part of Iran’s high profile and much publicized space program. However, after Iran’s successful satellite launch on Feb. 3 and Rouhani’s televised statement that the space program will continue, an newspaper affiliated with the administration reported that news of the end of Iran’s space program were politically motivated attacks on the president.

Iran’s space program began in 2004 with parliament’s approval to operate under the Ministry of Communications and Information Technology under the leadership of the Supreme Council of Space, which is chaired by the president.

To date, Iran has launched four satellites into space successfully. The program is often praised for being an “indigenous” effort of the Islamic Republic and Iranian officials have pointed to its successes as proof that international sanctions against Iran have not impeded the country's technological and scientific progress.

In 2010, President Mahmoud Ahmadinejad moved Iran’s space program from the Ministry of Communications and Information Technology into the office of the presidency.

But on Jan. 9, 2015, Rouhani, very quietly reversed the move. According to Mehr News, the “Iranian Space Agency was returned to the Ministry of Communications and Information Technology” and its work will be divided between four other currently existing institutions.

The report claimed that the Iranian Space Research Center would be "dissolved" and its components divided among the Ministry of Science and Research and other institutions. The announcement created a stir among conservative media organizations.

Kayhan reported the “strange and unbelievable news of dissolving this progressive and successful center with the order of the president,” adding that this center was where all the scientists of Iran had gathered. Kayhan defended Ahmadinejad's 2010 move and added that the space program had been removed from the Communications Ministry and brought into the president’s office was “because of its important structural role and national projects.”

Kayhan, a critic of the nuclear negotiations with the West, also linked the changes in the space program to the negotiations.

Conservative Jahan condemned the “dissolving of the Iranian Space Research Center,” republishing articles by Kayhan and Raja attacking the move. In the text of their coverage, the conservative media organizations admit awareness that that space program would move back to the Communications and Information Technology Ministry, a decision they disagreed with.

Iran Newspaper, which operates under the administration, reported Feb. 3 that moving the space program to the president’s office had “negative consequences” and that the ministry is better equipped to manage Iran’s space program. The article argued that having a separate agency outside the ministry was redundant. The article also argued that the president’s office was becoming bloated, and that Ahmadinejad left the office four times bigger than when he had arrived.

The article argued that media critical of the president interpreted the initial news about the space program as Rouhani "canceling" it to "court the West" and that it was an "Iranian retreat."

Iran newspaper reported that the Feb. 3 satellite launch shows the difference between the previous administration and the current one, which is “seeking to bring Iran to a place that it deserves without fanfare and political arrogance.”