Partly due to sanctions, smuggling of drugs, cigarettes and cosmetics is widespread in Iran and some question whether government organizations are implicated. 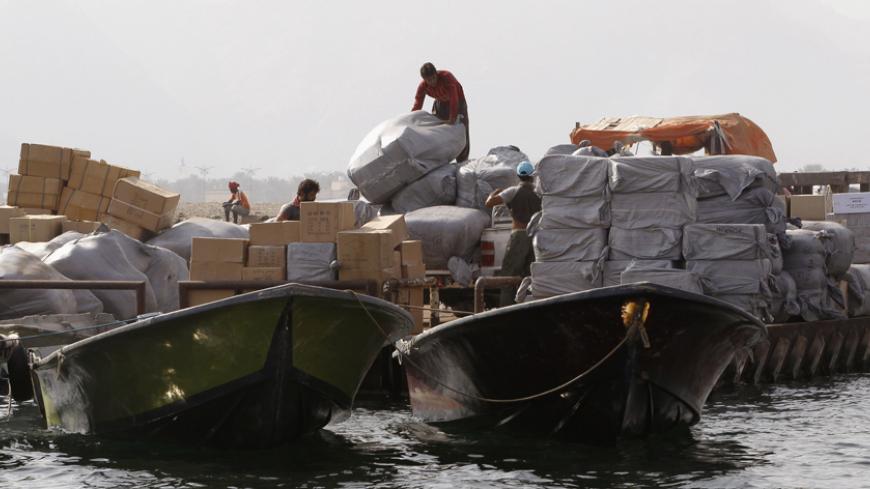 Habibollah Haghighi, chief of an Iranian task force to combat smuggling, announced that up to $25 billion worth of contraband was smuggled into the country between March 2013 and March 2014. Haghighi's announcement came during a Jan. 22 meeting in Qom among seminary heads, in which he stated that the "trafficking of contraband goods hindered domestic production and had negative impacts on the economic, health care, medical and cultural sectors." According to the official, the amount of contraband over the year was double the country's development budgets.

Iran's Central Task Force to Combat the Smuggling of Commodities and Currency, formed by direct order of the supreme leader, is affiliated with the Presidential Office, with the task force head serving as the president's special representative. On July 3, 2002, Supreme Leader Ayatollah Ali Khamenei issued an order establishing the office, stating: "Growth of trafficking and its harmful impacts on manufacturing, legal trade, investment and employment is a serious and significant danger that should be fought with full force. All relevant departments are obliged to play their role in this combat."

Hamid Zangeneh, an economics professor at Widener University, told Al-Monitor that Iran's high inflation rates and unemployment were the main reasons for the growth of smuggling. He said, "Another very sobering root cause of smuggling is the prohibition of many products in the market. Large bulks of these smuggled commodities are those that cannot be produced or purchased in the free market, such as alcoholic beverages, films, medicine and, most importantly, drugs."

Haghighi had previously reported on Iran's smuggling problem back in December 2014, thus highlighting how President Hassan Rouhani's administration is attempting to raise awareness of the issue through the media and seeking collaboration with powerful organizations like the judiciary and the police force.

According to official statistics, commodities such as cigarettes, cellphones, alcoholic beverages, cosmetics, satellite receivers and medicine are the top illegal imports.

The Islamic Republic of Iran Customs Administration announced that of Iran's annual $11 billion in cigarette imports, 25%, or $3.6 billion, is smuggled into the country. Drug trafficking is estimated to be worth $3 billion.

Ebrahim Dorosti, deputy of Iran's Chamber of Trade Unions, reported that illegal cellphone imports total $2 billion. According to Dorosti, 85% of cellphones are illegally imported to Iran, amounting to $200 million worth of losses for Iran's government.

Cosmetics smuggling is also big business, reports Iran's Deputy Health Minister Rasoul Dinavand. According to the minister, Iran is the seventh top consumer of cosmetics in the world, with the official import value at $1 billion. However, the illegal imports of cosmetics are worth "much more." Dinavand warned against the high volume of smuggling drugs, bodybuilding supplements and cosmetics.

Reza Tahmasbi, deputy editor-in-chief of Tejarat-e Farda Weekly — a popular journal that advocates a free economy — explained to Al-Monitor the role of international sanctions in increasing smuggling. "Obviously, the more barriers on the free market, the more smuggling there will be. International sanctions made the import of many commodities difficult or even prohibited. It paved the way for smuggling these goods. When you cannot [legally] import high-demand commodities such as cellphones, notebooks and computer devices, smuggling is the only way."

Smuggling of commodities has increased fivefold from 2007 to 2013. Majid Reza Hariri, chairman of the import committee of Iran's Chamber of Commerce, told Fars News Agency, "According to the statistics provided by the Central Task Force to Combat the Smuggling of Commodities and Currency, the total value of smuggling increased from $5 billion in 2007 to $25 billion later on."

It seems that international sanctions and the government's customs policies are not the only reasons behind Iran's booming smuggling economy. Zangeneh told Al-Monitor that the Islamic Revolutionary Guard Corps (IRGC) and the border police have played a role in the increase of smuggling. "The beneficiaries of these activities are not the government and government agencies. Actually, the government is the main loser in these affairs because they are denied the potential tax revenues that could result from these transactions and incomes. The main beneficiaries are the corrupt officials of the Sepah and border police who receive bribe money for looking the other way and in some cases actively participating in buying and selling of these commodities."

Former President Mahmoud Ahmadinejad made the most serious accusation against the IRGC in 2011, claiming that the IRGC uses its military ports to smuggle cigarettes: "The value [of cigarette smuggling] makes any first-class international smuggler greedy, let alone our very own 'smuggler brothers.'"

Head of the IRGC Maj. Gen. Mohammad Ali responded to Ahmadinejad's accusations in less than 24 hours: "These accusations are made to deviate the public's mind, by people who are beneficiaries themselves in our opinion."

In 2004, the sixth parliament's investigation body published a report on illegal imports and ports involved in illegal activities. The report clearly stated that three IRGC ports located in Chabahar, Khoor Zangi and Hormozgan were involved in this illegal trade, along with several police ports.

Progress in Tehran's international relations, a waiving of sanctions and future economic growth might restrict smuggling. However, an anonymous political analyst in Tehran told Al-Monitor, "As the final step in this combat, the government should stand against powerful beneficiary organizations such as the IRGC. This is a step Rouhani might never want to take."