Why did Velayati meet with Putin?

Despite points of disagreement on specific issues, Iran and Russia seem to be working diligently to develop a deep and strategic friendship. 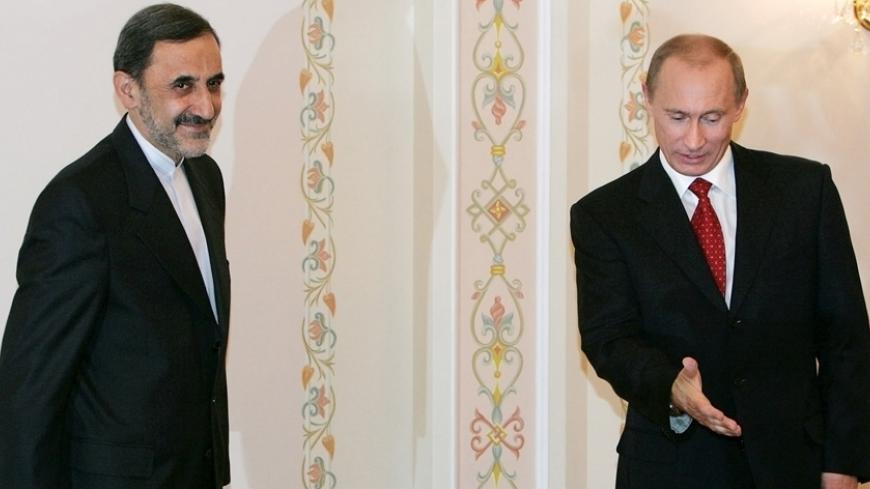 Over the last few months, the Russians appear to be signaling a green light for a deeper relationship with Iran. In fact, after feeling the bitter taste of sanctions on Moscow, Iran and Russia, which have their own disagreements on various issues, are turning into close and strategic friends. More delegations are meeting between these two archenemies of the 19th century, including a recent visit to Iran by the Russian defense minister and the announcement of a “hopeful” solution to the S300 missile dispute, a deal Iran has paid for but Russia has not yet delivered on.

Hassan Beheshti Pour, the ex-chairman of Iran’s Al-Alam TV, told Al-Monitor, “The West’s sanctions against Moscow over the annexation of Crimea to Russia is one of the main reasons for [President Vladimir] Putin approaching Tehran.”

Beheshti Pour added, “Prior to imposing sanctions against Russia, Moscow wasn’t willing to get close to Iran, believing this friendship would have repercussions for them, as the United States is sensitive to this sort of relationships, but now everything has changed and Russians have been placed on the sanctions list of the US and its partners. Therefore, they are not worried about their past concerns.”

On Jan. 28, Ali Akbar Velayati, the moderate conservative rival of Hassan Rouhani in the 2013 presidential election, led a high-level Iranian delegation to Russia. While visiting Moscow, Velayati, who is the foreign policy adviser of Iran’s supreme leader, held a series of meetings with Russian officials and Putin himself.

According to the Islamic Republic News Agency, Velayati carried a message from Rouhani to his Russian counterpart, and it was welcomed by Putin. Rouhani’s special envoy said, “Putin’s welcoming Rouhani’s message will have a positive effect on regional relationships.”

Velayati didn’t reveal many details of the agenda and results of his trip, but explained the outcomes of the visit by saying, “Russia agrees with Iran’s full membership in the Shanghai Cooperation Organization, but this issue takes time.”

He added, “Russia has shown more willingness for cooperation in [the five permanent members of the UN Security Council plus Germany] in recent months. Besides, we are hopeful about the increase of Russia’s collaboration in the nuclear talks.”

The question now is why Velayati, who holds no position within the Rouhani administration, was sent to Russia as Rouhani's special envoy to convey his message to the Russian president, and was he only delivering a message?

Asked these questions, Beheshti Pour said, “Similarly to the former foreign ministers of world countries, Mr. Velayati can take the responsibility of imperative missions assigned by Iran’s president. He is a foreign policy adviser of the supreme leader, so Putin knows he is talking to an official who is close to the supreme leader, and he may not be only passing on Rouhani’s message.”

He added, “Therefore, it must have been an important message that required a well-known, influential and skilled diplomat to transmit that.”

In an interview with Al-Monitor, Vladimir Evseev, head of the division on the Caucasus in the Russian Institute of Commonwealth Countries, said organizing a meeting between Putin and Iran’s supreme leader was the critical point of Velayati’s visit, adding, “In my opinion, Russian Defense Minister Sergey Shoygu spoke about this meeting with the Iranian side when he visited Tehran. So I think organizing such a meeting is the request of both sides.”

Deepening the relationship between Iran and Russia may be another aspect of Velayati’s visit to Russia.

“Velayati’s message was that Iran is ready to start a strategic dialogue with Russia,” Evseev said. However, Beheshti Pour believes Russians and Iranians haven’t reached a strategic cooperation level. He added that they have been pursuing this goal during the last two years.

Despite all this, Evseev said, “This message must have had an important content, as they preferred not to talk about it on the phone. Consequently, we can say a new issue has come up, despite the fact that Rouhani and Putin met a few months ago in Astrakhan.” He added, “A part of Iran’s message to Putin was focused on regional issues, including Syria, Iraq, etc.”

Explaining Rouhani’s message, Evseev said, “Russia and Iran have problems in Syria, Iraq, Afghanistan and others. We may solve them if we expend our efforts. President Putin endorsed this idea, which was included in Rouhani’s message. Perhaps the Russian and Iranian sides discussed a concrete plan in this sphere.”

During his trip to Russia, Velayati spoke of Russia’s willingness for greater cooperation in the nuclear talks.

Iranian public opinion has always been pessimistic about Russia, rooted in its colonial actions in Iran alongside Britain in the 19th century. Many Iranians believe Russia always wants to see Iran as a sanctioned country, so it can take advantage of Tehran's nuclear issue and play this card against the West.

The Iranian nuclear team shares this view to some extent as well. During the Vienna nuclear talks, which led to a second extension, one diplomat told Al-Monitor on condition of anonymity of Iran’s annoyance with the inactive role of Russia in nuclear talks, with Foreign Minister Sergey Lavrov not being present until the last moment.

Now, Velayati’s remarks following his meeting with Putin may be indicative of a new direction in Russia's nuclear negotiation policy.

Hence, despite what Velayati said about “Putin’s welcoming Rouhani’s message,” the Russian president has still not answered his Iranian counterpart.