The US administration believes that prospects for reaching an Iran nuclear deal have increased in recent days. 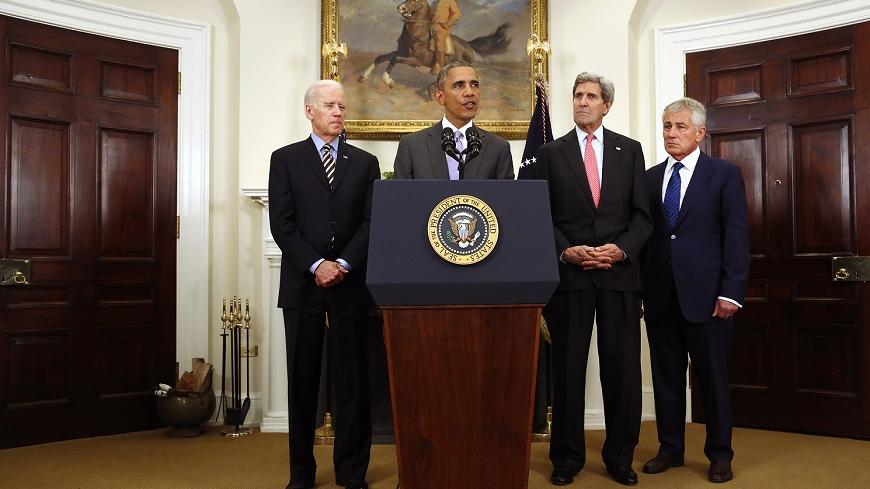 US President Barack Obama is flanked by Vice President Joe Biden (L), Secretary of State John Kerry (2nd R) and Defense Secretary Chuck Hagel (R) as he delivers a statement on legislation sent to Congress to authorize the use of military force against the Islamic State. - REUTERS/Jonathan Ernst

The US administration assesses that the odds of reaching an Iran nuclear deal have increased in recent days, after apparently significant progress was made in recent talks, experts briefed by the administration say.

“It is clear that an agreement is within reach, [that] many of the differences have been resolved,” Joseph Cirincione, president of the Ploughshares Fund, told Al-Monitor Feb. 13.

“If we get a deal that is close to the terms the administration has set out, and I believe we will, it is going to be a very good deal,” Cirincione said. “One that will surprise and please even many of the critics.”

Progress was made at talks held in Munich on Feb. 6-8 between US and Iranian negotiators, experts briefed by the administration deduced. The uptick in administration optimism about a deal suggests that there has been progress, possibly a breakthrough, on the enrichment capacity issue, among other factors.

US negotiators had previously presented Iranian negotiators with a few different ways an acceptable enrichment capacity could be achieved in a final deal that would meet Washington’s requirements for a minimum one-year “breakout” — the amount of time it would hypothetically take Iran to produce enough fissile material for a weapon, Al-Monitor previously reported.

From the US perspective, prospects for reaching a deal in the near term largely hinged on whether the Iranians would be able to come back and agree to work with one of the proposed formulas.

The United States also assesses Supreme Leader Ayatollah Ali Khamenei’s remarks Feb. 8 that he would be willing to accept a good deal to be mostly positive, experts briefed by US administration officials the week of Feb. 12 said.

They also see as a good sign that top US and Iranian leaders have publicly asserted the shared conviction that another extension of the deadline is not an option, and if they are to get a deal, they need to get it done in the current time frame.

“They are a few items away from an agreement [that would] substantially limit Iran’s enrichment capability, plutonium production capability and block pathways to a bomb,” Cirincione said, adding that the key outstanding issue now is sanctions relief, and how to phase it in. “But we are getting there.”

The signals from Iran also suggest the Iranian regime may be making a concerted push to sell a deal at home, and warning hard-liners against attacking it.

“I want to say that first of all, I consent to an agreement that is workable,” Ayatollah Khamenei told Iranian air force commanders in a speech Feb. 8. “Of course, I do not mean a bad agreement.”

If Iran’s negotiators “make a good agreement, it is fine by us,” Khamenei said. “I myself agree with that and I'm sure that the people of Iran are not opposed to an agreement that preserves their dignity, respect and interests.”

Notable from Khamenei’s Feb. 8 remarks is that he for the first time used the words “possible accord,” when previously he spoke about “agreed to talks,” an Israeli analyst on Iran, speaking not for attribution, said Feb. 14.