Hamas is making the release of the detainees of the 2011 prisoner exchange deal a condition for any future negotiations, saying that Israel did not abide by the agreements. 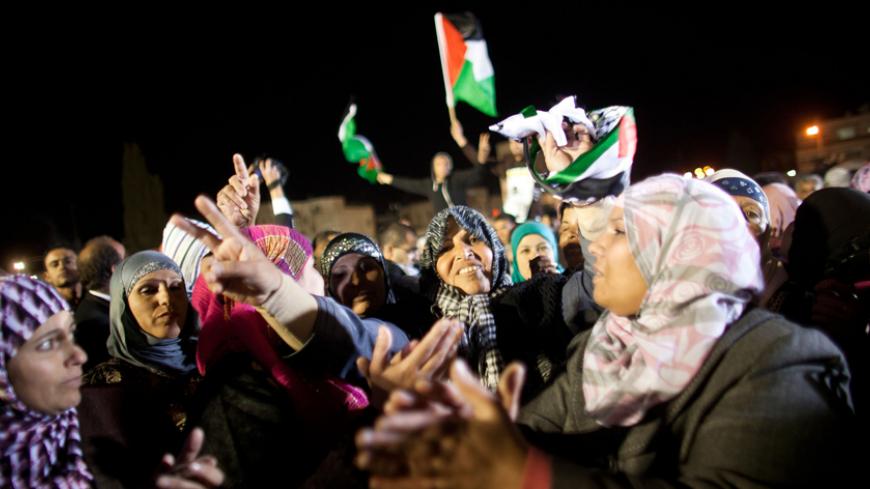 Palestinians celebrate as they wait for the release of Palestinian prisoners in Ramallah, Dec. 18, 2011. - Uriel Sinai/Getty images

RAMALLAH, West Bank — Iman al-Barghouti has been living in the Kobar village in Ramallah district for eight months, following the rearrest by the Israelis on June 18, 2014, of her husband, Nael al-Barghouti.

Barghouti spent almost 34 years in Israeli prisons before being released as part of a prisoner swap deal between Hamas and Israel on Oct. 18, 2011. With his rearrest, he joined 60 detainees who had also been released as part of the same deal in 2011.

His 50-year-old wife told Al-Monitor that her husband’s arrest left her in shock. They had been married for only 2½ years, and they were trying to build a stable family life. “After spending 34 years in jail, Nael was trying to experience life and discover it. But the occupation [forces] stole the joy of freedom by arresting him again,” she said.

She's afraid her husband will remain captive, as his health condition is deteriorating. She knows nothing about him because Israel is prohibiting her from visiting the prison and communicating by telephone. “I haven’t visited Nael since his arrest, and we cannot communicate. I'm worried about his health condition since he suffers from [high] cholesterol and needs to undergo a catheterization procedure,” she told Al-Monitor.

He was supposed to undergo this surgery before his arrest. She is also concerned that they will not be able to have a baby through in vitro fertilization, as their attempts were halted because of his arrest.

Al-Monitor received information from the Palestinian Prisoners Society (PPS) that the Israeli army rearrested in June 2014 a total of 60 detainees who had been freed as part of a swap deal, after three settlers disappeared from Hebron. The rearrest came as part of the campaign Israel started against the detainees who had been released as part of the deal. The arrest campaign also included activists, prisoners and deputies in the Palestinian Legislative Council, without any indication of the charges against the detainees. Israel reissued previous provisions against 21 detainees, most of whom had been serving long prison or life sentences.

The Israeli Supreme Court refused on Jan. 14 an appeal filed by six detainees, who were freed as part of the swap deal, against their rearrest and life sentences. The Israeli Supreme Court had refused in February 2013 to cancel a military order that allows Chief of the General Staff of the Israel Defense Forces Benjamin Gantz to arrest any detainee among those who were freed as part of the deal without revealing the related accusations.

An Israeli military order states that the chief or the Shabak (Israel Security Agency) is allowed to rearrest any freed detainee confidentially or through secret testimonies without revealing the accusations, to finish the remainder of the initial sentence.

PPS head Qadura Fares told Al-Monitor that Israel is using previous sentences to rearrest detainees, based on secret files, which is similar to administrative detention.

The rearrest of the freed prisoners will weigh heavily on any new negotiations or swap deals between Hamas and Israel in the future.

Hamas leader Mahmoud al-Zahar told Al-Monitor that Hamas will not accept to take part in any new negotiations before the detainees who were freed as part of the swap deal are released.

“These detainees will be the base of any future deal because Hamas cannot say anything or resume negotiations before they are released,” Zahar said.

He said Israel has to abide by the agreement, and that there is no point in reaching a new one when freed detainees are being rearrested.

“Hamas is firm about this issue, and it will not take it lying down. There should be a written pledge that those who were released or will be released in the future won’t be rearrested,” Zahar added.

In this regard, Fares said that the previous swap deal was not in writing and that this was a mistake. Moreover, the negotiation process took place amid lack of experience in Israel’s ways in backing down on its agreements, and in the absence of clear texts asserting that the released detainees would have a nonreversible acquittal.

Fares asked Hamas to hold deliberations and seek advice and information before engaging in any new swap deal negotiations. He insisted that the release of detainees who were recaptured be a prelude for any future negotiations.

Besides releasing the detainees who were rearrested, any future deal needs a sponsoring country for the negotiations to compel Israel to implement its agreements and keep its promises.

Zahar said that the issue of detainees and a swap deal will not be discussed unless the occupation implements the agreements of the previous deal, since “we won’t just give up on the matter.” He added that the Israeli commitment should be in writing.

Regarding Hamas’ consent to the Egyptian role in the previous deal and the possibility of it being a sponsor in any upcoming deal, Zahar said, “It is too soon to talk about the mechanisms, tools and course of action.”

Mrs. Barghouti asks for a strong state to sponsor any agreement with Israel. This state should be able to oblige Israel not to breach the agreement and to abide by its written and clear commitments without any misinterpretation considering that Israel violated the swap deal. Hamas considered that Israel should not have arrested the prisoners who were released in the swap deal that took place under the auspices of Egypt; the latter is not making any efforts or pressuring Israel into abiding by the deal.

Palestinians were hoping that the indirect negotiations with Israel would lead to releasing the detainees after the end of the offensive on Gaza in 2014, especially since Egypt sponsored the swap deal and handled the negotiations.

However, a government source, speaking on condition of anonymity, told Al-Monitor: “During the negotiations, Israel proposed releasing the freed detainees who were recaptured in exchange for the remains of the Israeli soldiers held by Hamas, but its request was refused and the negotiations were halted.”

Regarding the political efforts on this, Fares noted that Egypt is being encouraged to end the dilemma and pressure Israel. But Egypt is busy with its domestic situation, and its relations with Hamas aren't good.

Meanwhile, Hamas claims that it holds strong cards that would oblige Israel to abide by its terms regarding the release of detainees.