Despite societal barriers, more women journalists in Gaza are covering sports, but their numbers are still low relative to men. 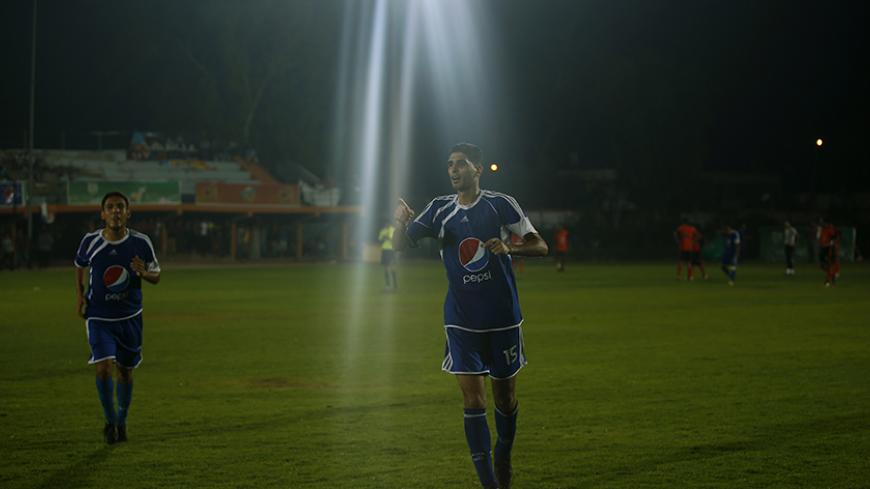 Palestinian Mohammed Sedody (R) of the Shati club celebrates his goal against the Khan Yunis youth club during their semi-final soccer match as part of the local Ramadan soccer championship at Yarmouk stadium in Gaza City, Aug. 1, 2013. - REUTERS/Mohammed Salem

GAZA CITY, Gaza Strip — Nelly al-Masry has covered soccer games in the Gaza Strip since early 2001, when she became the first woman journalist in Palestine to cover sports.

Masry has worked for several Palestinian newspapers, including Al-Hayat, Al-Jadida and Qatari Al-Sharq, and radio stations Al-Hurriya and Alwan. She sees no difference between female and male journalists when it comes to covering sports, as both strive to successfully cover the story and do a good job.

She told Al-Monitor, “I have not encountered many difficulties, even though I was the only female journalist who took the initiative and broke into the stadiums in a society that essentially rejects women working in nontraditional jobs and fields. But what helped me is that I grew up with sports. My father played for the Palestinian [soccer] team in the 1960s and he was a soccer coach. So some of my circumstances differ from those of most female journalists.”

Masry is a member of the media committee in the West Asian Athletics Association and the vice president of the women's sports committee in the Palestinian Olympic Committee. She hopes that more women journalists will start covering sports events from Palestinian stadiums. She said that she is mentoring some women journalists who newly joined the field of sports, to increase their presence in sport stadiums.

“I felt that female journalists, including recent graduates, are interested in sports. Some of them corresponded with me. I hope that the many media organizations in Gaza put more effort into sports journalism because it is an important part of the Palestinian media. I support a press that is more specialized,” Masry said.

Despite the small number of women sports journalists in the Gaza Strip, they have nevertheless shown creativity and reached senior positions. Sports journalist Taghrid al-Ammour has been working as the executive director of Alwan Sports Radio, the first radio station specializing in sports in Gaza, since 2012, the year of its inception.

Ammour entered the field of sports media in 2006 as a presenter on a morning sports show on Alwan public radio. She left her mark on Gaza’s sports scene when she started to cover and analyze the 2010 World Cup. She told Al-Monitor, “I hosted in the studio a fellow sports journalist who is known for monitoring tournaments and presenting his findings to the listeners. My dream came true when I became strongly present in that field as the executive director of Alwan Sports Radio in 2012.”

Ammour made a great leap in her career in 2014, when she started working as a reporter for Saudi sports station Al-Riyadiah. She now appears on satellite TV, which was her professional goal.

“I realize that I'm only taking my first steps," she said, adding, "I'm also trying to shed light on the wonderful aspects of Palestinian sports in all areas of sports.”

According to Alian, despite the strong interest in sports in the Gaza Strip and the presence of women journalists who have been able to gain access to the field of sports, customs and traditions still stand in their way. “In the Gaza Strip, female sports journalists are seen as different from other journalists. The social structure and the conservative tribal and religious components in Gaza impose significant restrictions on journalistic work in the field of sports coverage,” he said.

The executive director of Amwaj Sport, Maher Hamid, stressed that his organization, which owns television and radio sports stations, does not seek the assistance of any women journalists. He attributed the absence of women to a lack of candidates, while in fact many work for other institutions.

Hamid told Al-Monitor that another reason for him not employing women journalists is that it is mostly male athletes taking part in sports, saying, “Some female journalists have entered the field of sports because some international sports stations needed a female journalist instead of a man. The others, who work for Arab satellite TV stations, are female journalists who don’t specialize in sports.”

Despite the social barriers and the fact that some media organizations do not provide real opportunities, few women journalists in Gaza have still found themselves able to strongly compete with their male colleagues in sports media.