For the first time since 1981, Iranian women got unrestricted access to a soccer stadium as they watch the national team beat Cambodia 14-0. 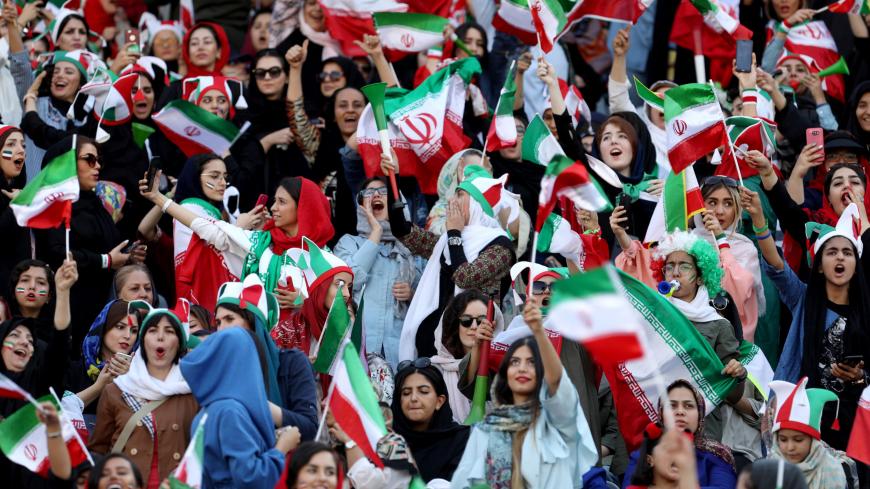 “I just cannot believe how much we shouted and cheered,” Maryam, 27, told Al-Monitor as she walked out of Tehran's Azadi Stadium. “I even cried at some point; I was so moved.”

On Oct. 10, the Iranian national soccer team scored 14 goals against the Cambodian team in the qualifier for the World Cup 2022, which will take place in Qatar. But the excitement of Maryam — and the international media frenzy — was not because of this impressive score; it was due to the fact that Iranian women were able to watch the game freely for the first time in decades.

Iranian women have been barred from soccer and sports stadiums for nearly 40 years, except for sports events for females. Clerics and conservative politicians argued that it was against Islam for women to sit together with men and watch men in shorts play sports.

With the rebellion of Iranian women and pressures from the outside world, the policy began to relax in the last few years. On previous occasions, a few women, handpicked by the government, were allowed in the stadiums.

The turning point for Iran came after Sahar Khodayari, dubbed "Blue Girl," set herself on fire in September outside a court for fear of being jailed for trying to sneak into a game. Following the incident, FIFA, the world’s governing body of soccer, reissued a stern warning to Iran to allow women into the stadiums.

On Oct. 10, women dressed in white — the color of the national team — snapped selfies to mark their first unrestricted presence. Some 4,500 women had bought tickets, urging the Iranian authorities to increase the number of stands dedicated to women.

“I would have preferred to sit with my husband, not isolated in the women’s section,” said Sahar. “But it was good to be in the stadium, so I do not want to have any negative thoughts now.”

Though the women were in a separate section of the stadium, they were the focus of the photographers, who took more photos of the female fans than the soccer players.

FIFA representatives also attended the game and a delegation of men and women talked to the fans of both sexes. They, however, made no comment to the media.

The male fans carefully refrained from any word or action that would justify the conservatives’ concern that the atmosphere in the stadium was not fit for women. None of the slogans shouted by the fans carried the least hint of insult.

Vida, 25, told Al-Monitor, "We were welcomed with fruits and cookies when we arrived at the stadium. Government officials treated us with respect. When we got to the stadium, the men didn't disrespect us and even in their chanting we didn't hear any bad or dirty words.”

The presence of women and their cheers clearly had a positive impact on the national soccer team that won 14-0. Masoud Shojaei, captain of the Iranian team, took all the players to the women's stand after the game, where they thanked the female fans for their presence.

It is not clear, however, whether women are allowed to attend games in the future.

Government spokesman Ali Rabiei told reporters after the Oct. 10 game, “For every social change, everyone must come together. The step our girls and boys took today was good. [But] some in the community also have a right to be concerned."

He added, “Given today’s atmosphere, the Iran Football Federation have an easier job [when women are allowed in the stadiums]."

However, Rabiei did not say whether the stadiums would be accessible to women in the future.